Along with Hindus, even temples are not safe in the current regime. Hence establishing Hindu Rashtra (Ishwari Rajya) has become need of the hour ! – Editor, Hindujagruti 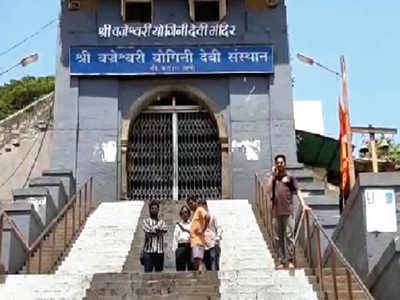 Bhiwandi : Cash and valuables worth Rs 12 lakh were looted from the Vajreshwari temple in Thane district, nearly 80 km away from downtown Mumbai, early on Friday.

Half a dozen armed men wearing masks entered the temple, which is situated between Virar and Bhiwandi, and tied up the security guard.

While five of them entered the temple, one stood guard outside. After the robbers left, the security guard alerted the trustees of the temple.

“They broke the five cash boxes and decamped with the booty. We are gathering information and are in the process of investigation,” said Deputy Superintendent of Police DM Godbole, who heads the Ganeshpuri division.

Recently the annual Navratri fair was held in the temple and coffers contained offerings of devotees.

After the temple trustees told the police, Additional Superintendent of Police Sanjay Patil rushed to the spot and checked the CCTV footage.

According to senior police officials, forensic evidence has been collected and dog squad has been pressed into action.

The temple was closed for visitors as police conducted the investigations. Nearby villages observed a bandh to protest against the incident.

Considered among the symbols of the glory of the Maratha Empire, the temple — situated on a hillock and is accessible by 52 steps — was re-constructed 280 years ago on the orders of the legendary Chimaji Appa, the younger brother of Peshwa Bajirao I.

It was his way of showing gratitude to the Vajreshwari Devi after he successfully liberated the Maharashtra coast from the grip of the Portuguese Empire and captured the Bassein Fort, Vasai, in 1739.