Hindus should pay gratitude to Lord Shrikrushna for this success !

Bengaluru : An art exhibition was organized from 22nd March to 31st March 2019 wherein artist Sujitkumar Mandya was to exhibit his artwork with title ‘Nude with Mangalsutra’. (Will these artists show guts to hold exhibitions on ‘Nude with hijab’ or ‘Nude with Cross’ ? A Hindu woman respects ‘Mangalsutra’. It is an ornament linked to her marital status and she has immense faith towards the same. It is therefore, a despicable attempt to hurt her faith by holding exhibitions with such artwork. Artists trampling Hindus’ religious sentiments under the guise of freedom of expression are anti-Hindus ! – Editor, Dainik Sanatan Prabhat). This artwork has hurt religious sentiments of Hindus. Women are shown in nude in this picture. Organizations like ‘Ranaragini’ Division of Hindu Janajagruti Samiti (HJS) and ‘Bharat Ekata’ have condemned this exhibition and made a demand with Bengaluru city Police commissioner for immediate cancellation of such indecent exhibition which disrespects Hindus’ religious sentiments. A drive was undertaken through social media against this exhibition. Artist Sujitkumar Mandya has informed that the exhibition was being withdrawn in view of increasing opposition of devout Hindu activists. (Along with withdrawal of the exhibition, such artists should be forced to render an apology to Hindus. Hindus need to try for it in lawful manner ! – Editor, Dainik Sanatan Prabhat) 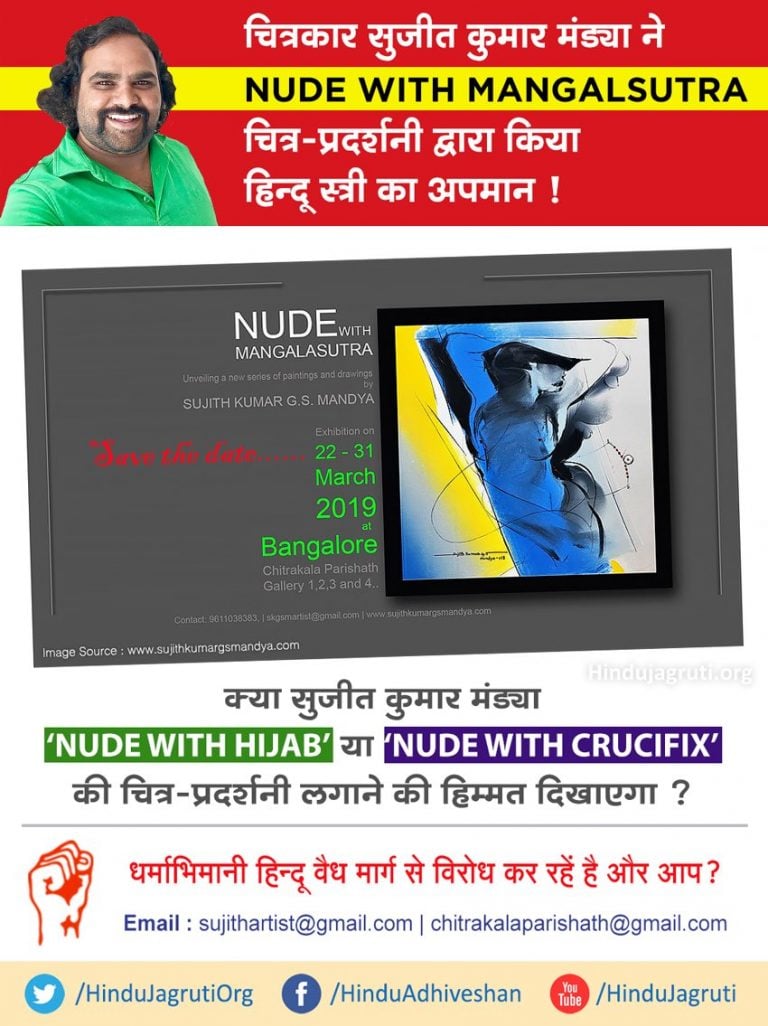 Bengaluru : An art exhibition in Karnataka has drawn severe criticism from certain sections of the society after certain paintings allegedly portrayed the Indian woman in a despicable position adorning a ‘mangalsutra’. Titled ‘Nude with Mangalsutra’, the exhibition which is set to be unveiled at the Karnataka Chitrakala Parishath in Bengaluru from March 22-31, has been organised by an artist named Sujith Kumar GS Mandya.

Bhavya Gowda, the Ranaragini convener of the Hindu Janajagruti Samiti, has written to the Bengaluru Commissioner of Police, complaining against the exhibition on the basis of “disgracing the modesty of womanhood by misusing the freedom of expression”.

“The very title ‘Nude With Mangalasutra’ is nothing but hurting the Hindu sentiment (as ‘mangalsutra’ is an ornament used only by Hindu women from ancient times) in general and disgracing the modesty of womanhood in particular by misusing the freedom of expression, that too at a prominent place like Chitrakala Parishat,” she said in her complaint.

The complainant further stated that though an artist has the right to expression in his art, he has “no authority or right or reason to defame the age-old rites of the Hindu custom or to outrage the modesty of a woman in public”.

She demanded strict action against the artist in view of the upcoming 2019 Lok Sabha elections and claimed that the timing of the exhibition could “induce, influence voters by outraging the Indian womanhood”.

“Women in India are considered as ‘mother’ and any disgrace to that name is not tolerated by a common Hindu… It appears that the organisers and Chitrakala Parishat also, deliberately and maliciously, intend hurting the Hindus in general and women in particular. The intended exhibition, if goes on as scheduled, may create violence and disharmony,” the complaint read.

The woman complainant claimed that the artwork is a violation of the Indecent Representation of Women (Prohibition) Act, 1986, an act that prohibits “indecent representation of women through advertisements or in publications, writings, paintings, figures or in any other manner”.

She demanded concerned authorities to take strict action and book the organisers for “defaming the age-old Hindu practice by using indecent, vulgar, filthy pictures in the name of art and disgracing the modesty of woman and religion”, and for “willfully causing hatred by encouraging such programs”.