Establish Hindu Rashtra so that Hindus should not be displaced as it happened at Jamshedpur : Mukund Kapase, District-President, Rashtriya Bajarang Dal 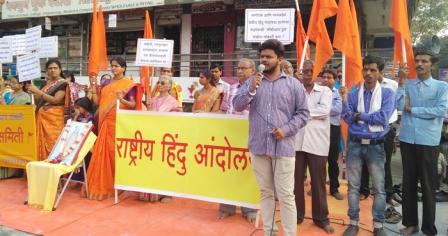 Amravati : Hindus were threatened at Jamshedpur; therefore, they started leaving. If we do not unite as Hindus in Bharat, we will face the same situation like Jamshedpur. We must therefore, try to see that Hindu Rashtra was established soon for avoiding situation like Jamshedpur. Attacks in form of terrorism, love jihad, cow-slaughter etc are increasing day by day which should be curbed in time, stated Shri. Mukul Kapase, District-President of ‘Rashtriya Bajarang Dal’ during demonstrations staged at Rajkamal Chowk under aegis of ‘Rashtriya Hindu Andolan (RHA)’. More than 9500 Hindus could watch the ‘sabha’ through ‘Facebook live’.

It is the tragedy of this country that we have to stage such demonstrations in our own country ! – Nitin Vyas, Regional President of ‘Bhagava Sena’

We have to stage demonstrations for demanding attack on attackers, is the tragedy of this country. The Government should note that we Hindus would have to take to streets if Pakistan, constantly involved in terrorist activities, is not wiped out from the world map.