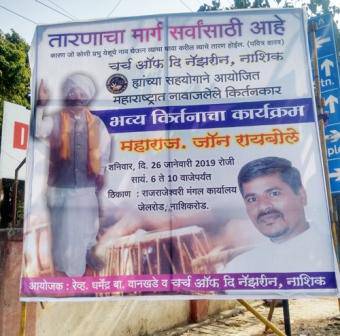 Nashik : In collaboration with the ‘Church of the Nazarin’ a programme of the so-called Maharaj John Raybole was being organised here some days ago. The advertisement of the programme was made in the name of ‘Grand kirtan by John Raybole’. Big posters of this advertisement were placed in the city at various places. ‘It was written on the posters, ‘Whoever will perform the rite of the ‘10th day will be salvaged’. (In Hindu culture after the death of a family member a rite is performed on the 10th day. Since when Christians started performing this rite? Hindus are not fools not to realise the various tricks of Christians for converting Hindus ! – Editor Dainik Sanatan Prabhat) The poster comprised a Christian in the attire of a Kitran artist performing kirtan.

Some pro-Hindus have raised a doubt with regard to this programme alleging that this is a conspiracy to convert Hindus in the name of Hindu Samskruti by using words like , ‘Maharaj’, ‘Kirtan’.etc.  As the conversion by Christians seems to be increasing in Nashik, pro-Hindus have appealed to Hindus to expose this conspiracy constitutionally.