I get satisfaction not by just taking God’s name but also by fighting against unrighteousness ! – Kondaveeti Jyothirmayi, ‘keertankar’, Telangana

Will other ‘keertankars’ show guts to say such things with ‘Kshatravrutti’ (fighting spirit) ?

Bhagyanagar : I get satisfaction not only by taking God’s name but also by fighting against wrongdoings happening at temples. I have met leaders of many political parties and even Chief Minister in this context; but nobody helped me; therefore, I have to now present my views before you, by coming here. All of us together have to fight this battle of Government’s taking over temples. We should question the Government about its right to have access to temples’ money? We should stage agitation like today in all other districts, talukas and villages and continue agitations till we get back temples’ management, stated ‘keertankar’ Kondaveeti Jyothirmayi. 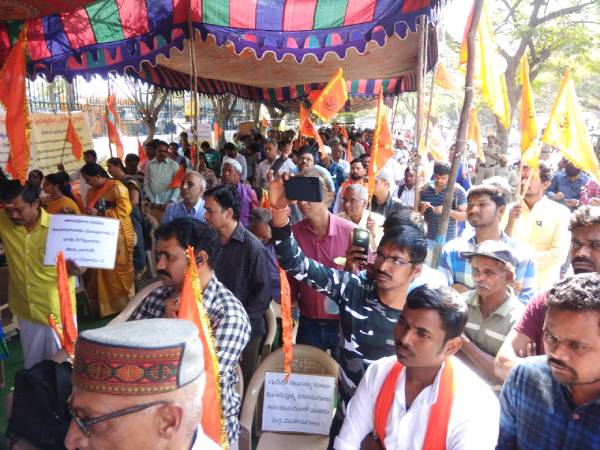 Various pro-Hindu organizations have started agitations against Telangana and Andhra Pradesh Governments for taking over temples’ management. Demonstrations were staged as part of this campaign on 3rd February at ‘Dharna Chowk’ in the morning. More than 250 devout Hindus from 22 organizations, including HJS, from Telangana and Andhra Pradesh, participated in the demonstrations. Participating dignitaries addressed the demonstrators.

Arts like dance, music, sculpting etc used to be nurtured through the medium of temples in ancient times. Food courts also used to be operated through temples and ‘Dharmashikshan’ was imparted but in secular India and with temples’ management being taken over by Governments, this culture is getting destroyed. Fighting against such things is our spiritual practice.

70000 acres of land only from temples in Andhra Pradesh has been illegally taken under control. The Government is taking over temples’ management claiming to control corruption even though the Government is fully drowned in corruption. How to believe the Government in such situation? How can there be corruption in temples where their income is just Rs. 1500/- to Rs. 2000/- every month? The Government has, however, taken over even such temples which shows that it is an attempt to eliminate temple-system.

Government recovers tax from temples but no such tax is payable by churches and mosques ! – Chetan Gadi, State Coordinator, HJS for Telangana and Andhra Pradesh

Temples used to be centres of education in ancient times. For today’s jobless political leaders, however, corruption has become a business. These politicians are looting temples’ funds by taking over management of temples. If Bharat is a secular country, why are the Governments taking over only Hindus’ temples ? Will Government take over churches and mosques in this country ? The Government doesn’t give even a single rupee to temples; but it is splurging temples’ money, in millions, on non-Hindus. Tax is levied even on educational institutes run by temples; but educational institutes run by churches or mosques don’t have to pay any tax. Isn’t it injustice to Hindus?

1. Shri. Narasimha Murty of ‘Rudra Seva Samaj’ performed ‘Gana-homa’ on ‘Brahma-muhurt’ for success of the agitations and for removal of all obstacles in holding such agitations. He distributed holy ash (vibhuti) collected in the ‘Homa’ and holy thread as ‘prasad’ to all devout Hindus.

2. Debate was held by ‘TV 9’ News channel in the evening of agitations on the topic of governments’ taking over management of temples. Kancha Ilayya, a writer, who generally spits venom against Hindu Dharma, spoke in favour of handing over temples’ management to Hindus.

3. Special debate was also held by ‘Telugu NI’ radio on these agitations as soon as they got information about demonstrations.

4. Kondaveeti Jyothirmayi could not control tears while addressing the demonstrators.