Protest against demand for imposition of ban on Sanatan and against unfair action taken against ‘Hindutvavadis’ !

Highlights : A handicapped person passing by on his tricycle, stopped on his way to know what was the issue and then joined it since he liked the subject. He even held a banner in his hand and waited till end. He showed interest in joining future drives undertaken by HJS. 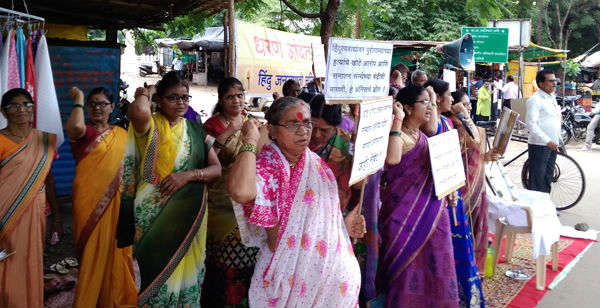 Vani (Yavatmal) : Demonstrations were staged at Tehasil Chowk, under auspices of RHA. About 30 devout Hindus including members of Shriram Gourakshan, Yoga Vedanta Samiti, Sanatan Sanstha and HJS participated in demonstrations while 275 people signed the representation circulated at the venue; thus indirectly joining activity related to protection of Dharma.

Highlights : Police from Intelligent Department did video-shooting of demonstrations and took photos.

Police kept keen eye on activists of HJS working for protection of nation and Dharma but have they ever kept such watch on fanatics ?

Yavatmal : Demonstrations were staged under RHA by various pro-Hindu organizations at Tiranga Chowk near Postal Ground between 4.00 p.m. and 6.00 p.m. to register protest against demand for ban on Sanatan Sanstha and to condemn supporters of naxalites. About 40 devout Hindus joined the demonstrations; including Shri. Manoj Audarya, the President of ‘Shriram Janmotsav Samiti’; Shri. Ram Sakhare of ‘Vaidik Brahman Sanghatana’; Shri. Ganesh Sathe of ‘Yuva Seva Sangh’ and members of Sanatan Sanstha and Hindu Janajagruti Samiti. More than 400 ‘jidnyasus’ extended support to the demonstrations by signing on representation which will be later sent to Chief Minister through District Collector’s office.

Huge police force was deployed at the venue though the situation was not at all sensitive. There were about 25-30 persons, including employees from District Police Superintendent’s office, police from Central Investigating Agencies, city police and ‘Damini’ Squad etc. patrolling at the venue.

1. Two staff members of Intelligence Department did video-shooting of the whole agitation. Camera mounted on police van was seen clearly and there were two police vans at the venue of demonstrations.

2. Staff of Intelligence Department was continuously asking for copies of representation on issues taken up during demonstrations.

4. Two reporters and representatives of two news channels were present on the occasion.

Demands made during demonstrations !

2. Political leaders, who tried to meet the naxalite-leaders and extended support to them, should be banned from contesting elections. Registration of parties which openly took stand in support of naxalites, should be cancelled.

3. Active members of banned party like CPI (Maoist), naxalites hiding in forests and all those encouraging urban naxalism should be found and eliminated.

4. It is treason to operate a parallel governing system by attacking our army and police. All people involved in these attacks should be booked under sedition and proper rights should be granted to army and police for eradication of naxalism.

5. Ploy to target Sanatan Sanstha, Hindu Janajagruti Samiti and other like-minded pro-Hindu organizations should be investigated by conducting in-depth inquiry.

6. Unnecessary demands are made for imposition of ban on Sanatan Sanstha and Hindu Janajagruti Samiti. The Government should dismiss such kind of proposals, if received.

7. Hearing of the cases is purposely delayed and ‘Hindutvavadis’ have to unnecessarily languish in jails. All such cases should be heard in ‘fast-track’ Court. Stringent action should be taken against the officers who are responsible for deliberate delay in hearing of the cases.