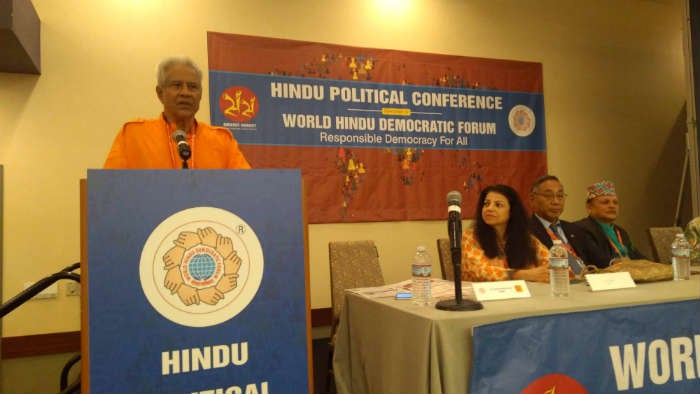 Shri. Maravanpulavu Sachithanandanji, an ardent Hindutwawadi and founder of Shivasenai in Srilanka to protect the interests of Hindus and temples is participating in the Hindu Political Conference organised by the World Hindu Democratic Forum at Chicago, Illinois from 8th sept 2018.

On the first day he is seen on the dais along with the Sweden ambassador and Co-ordinator Shri. Gautam, Sou. Santhosh Kalyan a MP from South Africa, Shri. Nigothuppar Therisingar from Tibet, a politician from Nepal and a journalist Ms. Prema Khadi.

During his presentation using PPT he highlighted the present plight of Hindus and Hindu temples in Srilanka. Sanatana Hindu Dharma is under a three pronged constant attack and threat for the past 30 years from Buddhism, Christianity and Islam. This has got reflected in the population bifurcation also in Srilanka. Hindu population has reduced from 15% to 12% whereas Buddhist, Christian and Islamic population have increased steadily.

Shri. Sachithanandanji’s speech was very well received by the audience. Around 2500 delegates from about 60 countries are participating in the conference.