Few days ago, there were news reports about Malyalam Writer Hareesh withdrawing novel ‘Meesha’ from Mathrubhumi weekly, following ‘threats’ (actually protest) from Hindu organisations. Many news reports have tried to malign Hindu organisations for ‘oppression of freedom of expression’ of a writer. Examples are reports from Outlook, Indian Express (Malyalam) etc.

Kamalram Sajeev, who heads the editorial board of the Mathrubhumi weekly even tweeted “S Hareesh withdraws his novel ‘meesha’, literature is being mob lynched, darkest day in Kerala’s cultural history, lightless days to follow.”

The ‘Samakalika Malayalam Varika’, a sister publication of The New Indian Express, on Sunday said it was ready to publish S Hareesh’s novel ‘Meesha’ (Moustache).

The Editorial Board of the Samakalika Malayalam Varika took the decision a day after the Hareesh decided to withdraw the serialised novel from ‘Mathrubhumi’ weekly following threats to him and his family from the right-wing groups.

But no media house has tried to know the reason behind protests from Hindu organisations. We are giving screenshot of controversial matter, against which Hindu organisations are protesting. Below is the translation of the matter from Malyalam to English. 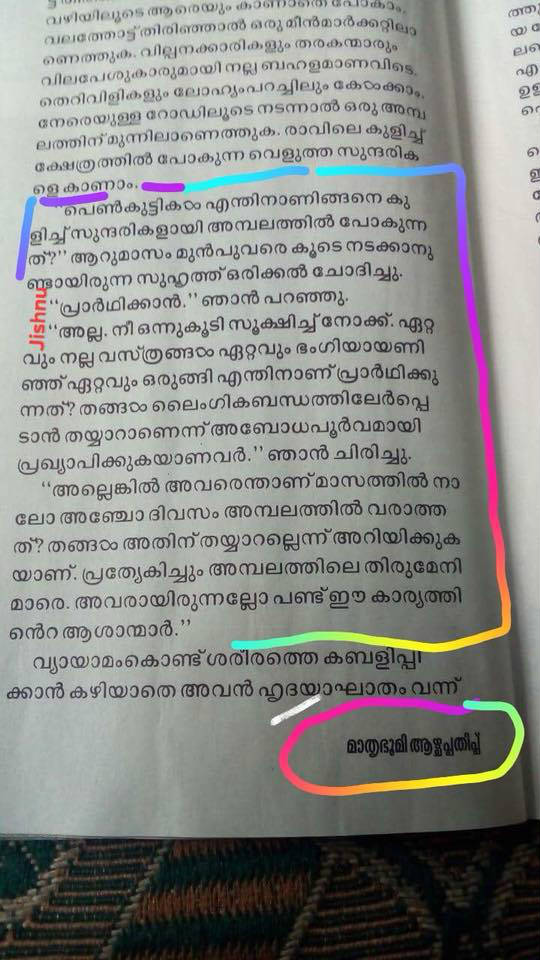 Mathrubhumi weekly in Malayalam, started publishing parts of a novel named ‘Meesha’ written by S. Harish. The article has become controversial due its lines that hurt Hindu feelings.

These controversial statements are as follows :

“No. You should look more attentively. Why go for praying wearing one’s best dress in the most attractive way? They are declaring it very subtly that they are ready for a sexual encounter.” I laughed.

“If not so, then why do they stop going to temple for 4-5 days every month? They are informing that they are not ready for that, especially the priests of the temple. After all, weren’t they experts in all this in earlier days?”