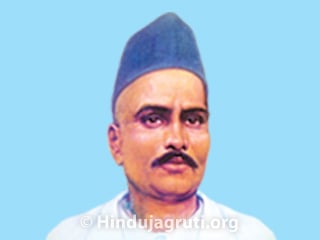 ‘Hindustan is a Hindu Nation’, this thought was put forth,
along with evidence, by revolutionary Babarao Savarkar

‘Babarao Savarkar successfully carried on the activities of the organisation called ‘Abhinav Bharat’ after Tatyarao (Vinayakrao) went to London in the year 1906. He built the organisation with youth members. He imparted training at physical and intellectual levels; created an atmosphere against the British. Owing to raising slogans like ‘Vande Mataram’, ‘Swatantryalakshmi ki Jai’ etc., cases were filed against him. He was punished; but still he carried on his activities. Although it was risky, he collected money and published the biography of Mazini (Freedom Fighter of Italy) sent by Vinayakrao from London; wrote patriotic songs. He published the song written by poet Govind emphasizing the principle as ‘Ranavina Swatantrya milena (freedom cannot be obtained without war)…’. He distributed among the youth, the weapons sent by Tatyarao from London. Baba protested against the punishment given to Lokmanya Tilak and ‘Kaal’-creator Paranjape.  The British filed case against him to suppress his revolt of nationalism and freedom movement. In the year 1908, Tilak was sentenced to6 years imprisonment whereas in the year 1909, Babarao was sentenced to life imprisonment and sent to Andaman.

After completion of his sentence in 1922, he set up young ‘Hindu sabha’. Revolutionaries like Bhagat Singh, Rajguru, Chandrashekhar Azad, V. B. Gogate etc. met him first and then Tatyarao. Baba met Congress leaders and others to get the death punishment of Bhagat Singh etc. cancelled but letters written by Babarao were found on the accused nabbed in connection with bomb blast in ‘Empire’ theatre and he was once again detained for 4 years. During this period, he wrote the book titled ‘Rashtramimansa’. In this book, he put forth the thought of ‘Hindustan is a Hindu Nation’ giving proofs.

In spite of very hard, difficult condition like weak financial position, adverse health, indifference of Hindus and Muslims who were waiting for an opportunity to destroy Hindus, he carried out many tasks successfully only with his self-confidence; by collecting patriotic followers. He always worked for freedom and establishment of Hindu nation. He breathed his last on 16th March 1945.’