If post-death rites are performed with faith and as prescribed by our Scriptures, then the linga-dēha (subtle body) of the deceased person, without getting trapped in Bhulok (Earth region) or Martyalok (In the region of the dead), acquires a positive momentum and moves on to higher regions. Consequently, the possibility of the deceased person tormenting the family members reduces. The possibility of such a linga-dēha being enslaved by negative energies reduces too. 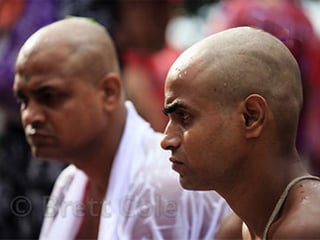 Question : In the previous paragraph it is said that, ‘The Raja-Tama predominant waves emitting from the linga-dēha of the deceased, traveling at a high speed get attracted to the black colour of the hair of their family members’. At the same time, as per spiritual science, it is also true that ‘to a certain extent, hair provide protection from negative energy attacks’. How to strike a balance between the two statements ?

Hindu Dharma considers woman to be a symbol of the unmanifest Shaktī (Divine Energy) of Adishaktī (Primal Energy). It is for this reason that Hindu Dharma bestows the woman a position of high respect. Having long hair is a symbol of modesty and therefore, cutting of hair by women is an anti-Dharmik act. A woman with a Sattva predominant disposition usually has long hair. The energy oriented Sattva-Raja waves transmitted by the tips of the hair, in a way, protect a woman from negative energy attacks. Hence, cutting of hair by women is generally prohibited or considered inauspicious. Conversely, ‘man’ is a symbol of active Shaktī and hence, whenever a family member passes away, the responsibility of all the final rites falls on the shoulders of male members of the family; hence, males shave off their heads completely.