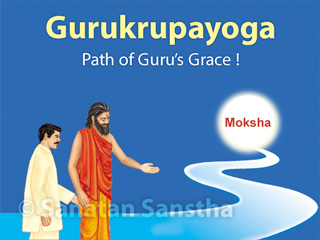 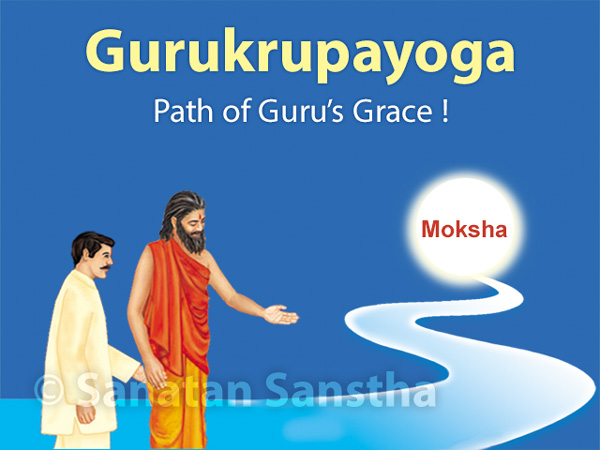 A foreigner asked a saint, “Could you describe the uniqueness of India as briefly as possible?” The saint responded by saying “The Guru-disciple lineage”. Seekers who have practiced Spirituality through various paths for several years and not progressed beyond a particular spiritual level yearn to attain the Guru’s grace. On the other hand seekers who have made spiritual progress by the grace of the Guru get spiritual experiences to prove the absolute supremacy of this path.

The word krupā has been derived from the root krup which means to be compassionate. Krupā means compassion, anugraha (initiation) or a prasād (blessing). Thus Gurukrupāyoga is the path in which by means of the Guru’s grace (gurukrupā) the embodied soul is united with Shiv (God Principle).

2. Importance of the Path of Guru’s Grace

3. Importance of the Guru’s grace (gurukrupā)

One comprehends the nirgun (unmanifest) with intellect and the sagun (manifest) with prīti (spiritual love). This intellect is a subtle form of the intellect acquired by studying the scriptures. This intellect destroys the anādi (one without a beginning) illusion. From the beginning of the state of the jīvadashā (embodied soul) each one has the illusion (misconcept) that “I am distinct from Brahman”. By studying the scriptures one realizes by means of his intellect that “I am not distinct from Brahman”. However later he begins to feel, “If I am not different from Brahman then how is it that I do not experience it?” and thus another illusion develops. This illusion having an origin is described as the ādi illusion. This ādi illusion is destroyed solely by the grace of the Guru. This means that on account of the Guru’s grace the sagun prem (love of the manifest) and the sagun bhakti (devotion of the manifest) derived through satsang (holy company) transform his love, that is convert love into spiritual love which is devoid of expectation and thus the form of the manifest itself vanishes. As a result, the notions originating from relative knowledge that the manifest has a form and the unmanifest is formless are destroyed. When relative knowledge gets transformed into absolute knowledge the difference between the manifest and the unmanifest with regard to form, no longer persists. If relative knowledge were to be true then its awareness would not have been destroyed. This awareness of relative knowledge that is pratyay itself is the ādi illusion. Once devotion of the manifest begins, sākshātkār (actual realization) that the manifest is really unmanifest Bliss occurs, the knowledge of the unmanifest that is thinking that the unmanifest is different from the manifest dissolves and one experiences that “I am Brahman” that is one experiences non-duality. Hence, saints term the unmanifest as the most subtle among vāchyānsha (spoken topics) and the manifest as the lakshyānsha (ultimate target), that is The Lord. Since scholars have no experience of satsang, this concept is not acceptable to them. Rāmeshvar Bhaòò who was instrumental in immersing the holy verses of Saint Tukārām in water attained Absoluteness (Pûrnatva) with the grace of Saint Tukārām alone.