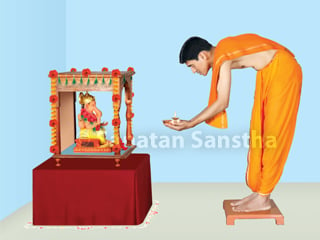 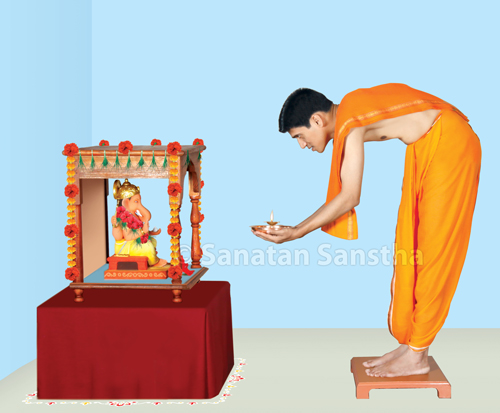 It is a common practice among Hindus to light a lamp in front of the Deity during their morning worship as well as during sunset. But not many would know the actual reasons behind waving a lamp in front of Deities. Let us read this article which explains why and how do we perform this step as one of the important steps in daily ritualistic worship.

Performing the puja (Ritualistic worship) of a Deity with atma-jyoti means performing puja in the true sense. Since this is not possible for us, we use a lit lamp (to symbolise the atma-jyoti) and perform the puja.

B. The lit lamp activates waves of Tejtattva associated with the Deity. Waving it around the individual helps awaken the atma-shakti of the individual. Hence, while waving a lit lamp, an individual sometimes gets the spiritual experience of self-realisation, or perceives that the flame of the lamp is merging with the flame-like appearance of the soul.

3. Why is a dhoop (Frankincense) waved first,

followed by a lit incense stick and then a lit lamp?

C. Lamp: A lit lamp emits waves that are Sattva predominant and associated with the Tejtattva. Waving a lit lamp after waving a lit incense-stick activates the Deity’s subtle-Principle present in the universe. It helps the individual get the benefit of saguntattva (Materialized) and nirguntattva (Non-materialized) of the Deity as per the need.

4. Why should a lit incense-stick or niranjan be waved thrice?

There are three types of Shakti waves of God – ichha, kriya (Action), and dnyan (Knowledge). As per the need, Deities function in the universe on the strength of these three waves of Shakti. Waving an incense-stick thrice in front of a Deity means performing puja of these three waves of Shakti, thereby, worshipping the actual source of Shakti functional through the Deity. Waving thrice helps in activation of ichha, kriya and dnyan waves present in the universe, which in turn helps in activation of manaha-shakti, atma-shakti and chit-shakti (Energy of the sub-conscious mind) respectively of the individual. On the strength of these 3 Shakti, purification of the physical and subtle-bodies of the individual occurs simultaneously. Its effect on the body also lasts longer. If all the acts are performed with bhav (Spiritual emotion) and an understanding of the spiritual science underlying every ritual in upasana-kanda, greater benefit of the sattvikta (Purity) is obtained. When a balance of ichha, kriya and dnyan [Chit ] waves is maintained, the spiritual progress of the individual is faster.

5. Why should the lamp be waved clockwise only?

When waving a lit lamp in front of the Deity, begin from the right foot of the Deity, take it up to the face of the Deity and then towards its left foot, meaning, wave the lit lamp clockwise. This activates the Suryanadi (Sun channel) of the individual waving the lamp, and improves the ability of his subtle-bodies to imbibe Sattva predominant waves and subtlemost waves emitted by the Deity.

6. Why should a bell be sounded

while waving a lit incense-stick or a lit lamp?

A. The bell performs the function of marak (Destroyer) nature. This is why, when sounded, it awakens the marak-bhav in the one who hears it and the individual experiences a thrilling sensation in his body.

B. Through its sound, the bell emits marak-shakti (Destroyer energy). This reduces Raja-Tama components in the environment and reduces the influence of negative energies. Thus, the obstacles created by negative energies are eliminated.

7. Some practical instructions pertaining to an oil lamp

A. Do not light a ghee (Clarified butter) lamp with the help of an oil lamp

B. Change the wick in the oil lamp placed in the temple at home every day

When the wick of an oil lamp burns, soot collects on it. Using the carbon components containing Raja–Tama predominant particles hidden in the soot, negative energies create a covering of distressing energy around the lamp and reduce the lamp’s ability to imbibe and emit sattvikta and Chaitanya (Divine consciousness). Hence, it is a practice to use a new wick every day.

Physical performance of a deed

Spiritual practice done with the mind,

Energy of the mind

Energy of the soul,

Flame-like appearance of the soul