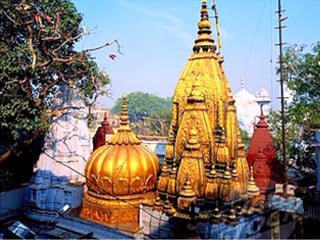 1. Guardian deity of a territory (kshetrapaldevata)

Kshetra means a small or large plot of land and pal means to nurture or protect. Thus the guardian deity of a territory is the one which nurtures or protects a particular area of land.

Places of pilgrimage are of various kinds like prayags (places where there is a confluence of two rivers), four dhams (holy places), seven puris (small cities), fifty-one shaktipiths (seats of Divine Energy), twelve jyotirlingas (divine phalluses), eight seats of worship of Lord Ganapati (ashtavinayak), places of worship of Lord Datta and those of the Sun deity (Bhaskar).

A. According to the prevailing time (kal): Some deities have been existing since times immemorial, for instance the seats of Divine Energy and the jyotirlingas. However some other deities have come into existence later. For instance samadhis (tombs) of saints. We shall refer to such a place where there is a samadhi of a saint as a deity of the place of pilgrimage (tirthakshetradevata).

1.3 Deity of a place of pilgrimage (tirthakshetradevata)

The origin and meaning of the word tirthakshetra (तीर्थक्षेत्र), a place of pilgrimage is from two words – tirtha (तीर्थ) and kshetra (क्षेत्र). The word tirtha meaning a sacred place is said to be derived from the following concepts.

1.4 Creation of deities of places of pilgrimage and associated deities

A. Narayan and Vishnu: The Tantra text, Ganeshyamal states that each of the twenty-seven frequencies emanating from the twenty-seven lunar asterisms reaches the ajanaj region (ajanajlok) from the region of the lunar asterisms (nakshatralok / karmadevlok) and divides into four sections (charans). Thus 27 x 4 = 108 frequencies reach the earth. (Refer ‘Science of Spirituality: Chapter 25 – Composition of the Universe’.) These frequencies reach the earth through the media of absolute ether (akash), Aditya or Mitra (sun), clouds and air. Hence all these are considered as representatives of the dyu region (dyulok). These 108 frequencies are referred to as narayan. They divide further into four – yama, surya, prajapati and conjoint frequencies. They are identical in all aspects, that is with respect to speed, purity and spiritual knowledge and in combination are known as vishnu. Vishnu frequencies descend onto the earth and impregnate it. As a result, the earth gives birth to several offsprings. These four frequencies are referred to as providers of food (‘चतुर्महाभागा: ओषधं ददाति ।’) where ओषध means food. Hence Lord Vishnu is known as the ‘deity of nourishment (annarasadevata)’. Thus since the entire world is created from these four frequencies it is composed of Vishnu Himself.

The yama, surya, prajapati and conjoint frequencies of radiance which are emitted by the 27 lunar asterisms generally descend onto the earth with greater potential on certain days as mentioned in the table below

B. Shiva: There is dissolution of the four frequencies (vishnu frequencies) when they collectively unite with the earth.

The yama, surya, prajapati and conjoint frequencies of radiance are associated with the 360 frequencies arising from the various cosmic elements mentioned above. Ancient sages from this land of the Vedas have explained the importance of specific dates (tithis) through the media of sacrificial fires, ritualistic worship, vowed religious observances, the Shrutis, Smrutis and Purans. Their motive behind this was to emphasise that the effect of these radiant frequencies on the body is favourable and that they assist an embodied soul undertaking spiritual practice (jivatma) to make spiritual progress stepwise to the subtle soul (sukshmatma), divine soul (divyatma), purified soul (vishuddhatma) and liberated soul (muktatma) and to attain the Final Liberation from the cycles of birth and death.

G. Path of the Great Illusion (Prakruti) and that of its controller: The 360 frequencies resemble the serpents in a game of snakes and ladders. They envelop the one leaving the atmosphere of the earth and keep him in bondage. Due to the velocity of these 360 frequencies, the subtle body leaving the earth gets trapped in the atmosphere of the earth. This is known as ‘the path of destiny’. Contrary to this, the hiranyagarbha frequencies travel from below upwards with great intensity. At the point where they intersect the 360 frequencies the intensity of the latter is reduced. Taking advantage of this, that is using the points of intersection as sort of ladders the subtle body can cross this bondage of 360 frequencies and go beyond the earth. Within a moment Sage Narad would travel from the earth to heaven using the same ladder. This ladder is referred to as the ‘path of the Creator’, that is the ‘path of zero stress nature’. The influence of the Creator is important in places of pilgrimage, elsewhere destiny predominates.

In destiny, the eightfold Great Illusion (ashtadha Prakruti), that is upheaval of emotions is important. Destiny, that is absolute earth (pruthvi) tries to incorporate everyone into itself. People under the influence of destiny (those trapped in destined actions) feel ‘I am (aham)’ whereas those in constant communion with the Creator (seekers) say ‘He is I (So’ham)’. Shaivites who believe in the 360 frequencies apply holy ash (bhasma) in three horizontal stripes while Vaishnavites who believe in the 108 frequencies apply sandalwood paste (gandha) in three vertical stripes.

The 108 and 360 frequencies are of the samyak type. Heaven (svargalok) has samyak, the earth has tiryak and hell (patal) has visphutit frequencies.

1.5 Do locations of places of pilgrimage (tirthakshetras) change?

B. Modern astronomers state that the axis of the earth is changing. Consequently the places of pilgrimages and the adjacent territories do not change because according to the influence of time the points from where the frequencies originate also change.

1.6 Importance of a deity of a place of pilgrimage (tirthakshetradevata)

B. When studying at a place of pilgrimage if one is inspired by one thought then that place generates ten more thoughts.

C. Since there are 108 pure frequencies at a place of pilgrimage, spiritual practice done there is far more rewarding. This is precisely the reason why formerly schools of Spirituality were established at places of pilgrimage.

D. A sacred place (tirtha) is meant for accomplishment of spiritual progress while a territory fulfills materialistic aspirations.

E. Saint Tukaram says, ‘Concentrate the mind remaining seated in one place where you live and contemplate on The Lord’. This quote might raise a doubt in the minds of some whether one should undertake pilgrimages. After fulfilling all worldly tasks instead of wasting one’s leisure one should undertake chanting, meditation, etc. Obviously for this one requires a liking for spiritual practice, concentration and a peaceful mind. In the absence of these one should go on pilgrimages, pay obeisance to saints by placing one’s head on Their feet and return home with the same spiritual emotion (bhav), foster it and let it grow.

1.7 To which sect does a place of pilgrimage belong?

The one who experienced either Shiva, Vishnu or Divine Energy (Shakti) in a place of pilgrimage for the first time considered that place as belonging to his sect. In sects such as the Shaiva, Vaishnav, etc. which are male dominant a sacred place is considered more important than a territory. However in the Shakti sect the converse is true. Hence at times, a place of pilgrimage has two names – one masculine and the other feminine. Male guardian deities of a territory are related to female deities by relationships such as the father, husband, son, servitor, charioteer, friend, assistant, etc. A territory is known as asthan and the guardian deity of that territory as asthanak. Such a deity of a place of pilgrimage has the following special features.

1.8 Importance of India with respect to deities of places of pilgrimage

Of the 108 centres, 52 are in India. Their prominent feature is that they are activated synchronously. They have remained active in India because of religious rites and the presence of saints. The centres from Kanyakumari in South India to Kashmir in North India are elliptical in shape and resemble the birth passage (yoni).

Out of centres 53 to 108, half are devoid of energy as their activity has not been maintained. Besides other centres do not get activated synchronously.

1.9 The five great places of pilgrimage

They are 1. The earth (bhumi), 2. Clouds (megh), 3. The Sun deity (Aditya), 4. The phallus (father) and 5. The birth passage (mother). At times the earth is said to be the first territory and the sun and the clouds, the guardian deities of the territory.

Ancient seats of Divine Energy (shaktipiths), jyotirlingas and places of pilgrimage such as Badrinath receive the 108 frequencies continuously and will continue to remain places of pilgrimage till eternity. As against this, places of pilgrimage created by saints do not remain so after two to three centuries of their creation according to the rule that ‘whatever is created has to undergo dissolution’.

1.12 The attitude while visiting places of pilgrimage

Before the advent of the foremost (adi) Shankaracharya people used to embark on a pilgrimage to three places Kashi, Prayag and Gaya (tristhali yatra). It was only later that Shankaracharya began the concept of pilgrimage to four places Kedarnath, Rameshvar, Jagannath and Dvarka (chardham yatra). When undertaking such pilgrimages one can visit all the places of pilgrimage in India and study the entire country as well.

A. What should the attitude be like?: If a visitor to a place of pilgrimage has the following qualities then they prove beneficial to him.

The qualities are 1. Yearning to know the truth, 2. Dedication unto scholarly pursuits, 3. Realising that there is still a lot to learn even after extensive study.

B. What should the attitude not be like?: A common man carries the following when visiting places of pilgrimage.

These four attributes illustrate that man is indeed a four-legged animal!

1.13 How much time should one spend at places of pilgrimage ?

The duration of one’s stay at a place of pilgrimage is not important, but the capacity to grasp Spirituality is and it is this which determines that duration. No matter how painstakingly a Guru teaches His disciple at a place of pilgrimage, when the disciple returns to the Great Illusion, he forgets what he is taught. However after acquiring absolute knowledge no matter where a disciple goes he can attract the 108 frequencies as he can create absolute ether (akash) [vacuum]. Once this occurs frequencies at a place of pilgrimage can reduce. Diverting a deity’s energy elsewhere in this way is referred to in the Konkan region in India as ‘keeping a deity in bondage’. However such a deity can ‘free’ itself from the bondage and help an earnest devotee.

1.14 Importance of maintaining sanctity of places of pilgrimage

Trustees along with priests and devotees should strive to maintain the sanctity of places of pilgrimage. Otherwise they remain as namesake places of pilgrimage and later since devotees do not get spiritual experiences there they lose their faith in them. The following examples will illustrate what happens if sanctity is not maintained.

1.15 Guardian deity of a field

A. This deity is classified in the bhairav class of Lord Shiva’s retinue. Many a time it holds a lotus in its hand and is associated with a serpent. The lotus represents Brahma and the serpent, Vishnu and Shiva thus illustrating the relationship of the guardian deities with superior deities.

B. Other Names: In the Konkan region in India it is known as Khetri. Some people also consider deities such as Jotiba, Ravalnath, serpents, etc. as guardian deities.

D. Science behind the idol and instruments

E. Family: A guardian deity is accompanied by a dog.

F. Vehicle: The vehicle of many guardian deities is a horse or a serpent.

1.16 Guardian deities of a higher spiritual level in India

A. South Konkan and Goa
Male deity: Ravalnath (raval means snake hole). Parshuram is the creator and not the guardian deity of the Konkan region.
Female deities: Bhumika, Santeri, Shantadurga, etc. are worshipped in the form of snake holes.