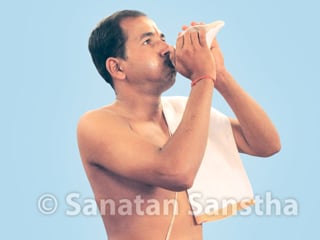 Namaskar! We heartily welcome you all for this Satsang (spiritual meet)! Before we commence this Satsang let us pay obeisance at the Holy feet of Sadguru (spiritual master) so that by His grace the very objective of this Satsang is fulfilled. Please pay mental obeisance to your personal icon of faith and recite as follows:

In the previous spiritual meets we have understood the arrangement of temple room and the importance of it from the view point of spiritual science. We have also seen the spiritual significance of various articles of puja such as kalash, lamp etc. Similarly we have also come to know the importance of ghee lamp, its effect on the worshipper, the difference between the straight and puffed wicks in Sanatan Vaidik Hindu Dharma. The science underlying the importance of copper articles in puja ritual was also explained. We hope that you must have tried to take the benefit of the spiritual science explained in these Satsang by actually putting it in practice.

In this Satsang we shall make you familiar with other articles of puja namely, ‘bell (ghanta) and conch (shankh)’ from the standpoint of spiritual science.

1. Importance of conch (shankh) as per scriptures

First of all let us see the importance of shankh. According to our ancient scriptures that is Puranas, the shankh was originated during the Churning of ocean (Samudramanthan) by the Deities and Shri Vishnu held it in the form of weapon. As per a holy verse which is regularly chanted during the puja ritual it is mentioned that by the command of Shri Vishnu the deities Moon, Sun and Varun are stationed at the base of the shankh, the deity Prajapati on its surface and all the places of pilgrimage like Ganga and Saraswati in its front portion. Yet another specialty of shankh is that the vibrations emanating on blowing it destroys the disease causing germs in the atmosphere. That is the reason it has a important place in Ayurved and medicine.

Let us see a subtle drawing which explains us the importance of shankh.

In this subtle drawing we can see that the yellow coloured circles of chaitanya are being emitted from shankh in the atmosphere. The subtle blue coloured dots depicting devotion are projected like rays in straight line. The pink circles are formed of particles of bliss (anand) and they are constantly active.

2. Blowing of shankh in puja ritual

When the shankh is blown before the start of puja energy is emitted from the shankh. This energy reduces the strength of distressing frequencies. Besides a protective armour of chaitanya (divine consciousness) is formed around the articles of puja.

There is another benefit too. That is when the shankh is blown the activated energy of Shri Vishnu in the universe gets attracted towards the place of worship which is not only beneficial to the person who is blowing the shankh but also to all those who hear it.

Just as the shankh is blown before the start of puja, it is also blown before an arti. The objective behind this being to sustain the deity’s chaitanya attracted to the place of puja ritual and the pure atmosphere generated because of the sattvik frequencies, for a long period.

2.1 Effect of energy emitted from blowing of shankh

As soon as the shankh is blown the frequencies of divine energy (shakti) are emitted into atmosphere due to sound generated. These energy frequencies are seen in red colour. Along with these energy frequencies yellow circles of chaitanya are also projected in the atmosphere. You can also see the pink particles of Bliss being emitted in the atmosphere. This increases the proportion of shakti (energy), chaitanya and anand in the environment and that is why the negative energies get distressed and run away.

Thus it has become clear to us the importance of blowing shankh during puja ritual. The blowing of shankh makes the atmosphere  holy and pure and conducive for the spiritual practice (sadhana) of the individual. Thus it becomes easier for an individual to receive maximum sattvik frequencies emanating from the deities.

We have seen that because of blowing of shankh the frequencies consisting raja–tama particles are destroyed and at the same time the saviour and destroyer principle of a deity is awakened. Now let us see the correct method of blowing the shankh.

First slightly raise your neck and bend it little backwards and keep the mind focused. Take a deep breath and start to blow with increasing intensity. One should keep in mind that blowing of shankh should be completed in one single breath. When the shankh is blown in this way Sushumna channel of the individual gets activated and it helps in keeping a correct balance of raja and sattva particles related to Tej and Vayu elements. This awakens the saviour and destroyer principle of a deity according to the need.

There are several crisscross circles on the inner surface of shankhani. When you blow through it these circles create obstruction in the interrupted flow of sound vibrations. The sound vibrations when generated rub against these circles thereby producing distressing frequencies. These new distressing frequencies further activate the distressing frequencies already present in the atmosphere. Both the vibrations from the shankhani and those from the negative energies present in the atmosphere get attracted towards the place of puja and make the surrounding atmosphere impure. That is the reason shankhani is not used in the usual puja ritual. However the worshippers following the Aghori Vidya (worship to accumulate black energy) use the shankhani for attracting negative energies at the start of their worship.

During puja ritual the shankh is kept in a specific way. The pointed portion is directed toward the deity.

When the shankh is kept with its pointed portion towards the deity then the house gets the energy emitted from  the other end in required amount. Now let us know about ritualistic worship of shankh.

A shankh is filled with water prior to actual puja of a deity and following the puja of kalash. Then it is ritualistically worshipped by offerings of sandalwood paste, flowers and Tulsi leaves. After the shankh puja the worshipper sprinkles the water filled in shankh on himself and the articles of puja. The water filled in shankh is considered as pure as water of Ganga river. It is also used for giving holy bath (abhishek) to the deities.

5. Important points to be noted while using a shankh

Now let us see some useful points about shankh

The bell is used mainly at two places – One which we use in our temple room and the other we see in the temples. First of all let us understand about the bell we use in our temple room. Nowadays we come across articles of puja made up of various metals. They even have different artistic designs on them. As per the science of spirituality the bell should be made from either copper or brass. The carving of images of Garud or Nandi is allowed according to scriptures.

The Sound generated by the bell should be gentle and sweet. In a puja ritual the bell is used during such sub-rituals as waving Frankincense (dhoop) and Lamp as well as while performing arti for creating gentle sound. In a puja ritual what is the importance of sound and what happens on spiritual level can be understood by looking at a subtle drawing. The subtle drawing means a drawing which tells us about the subtle process which is going on at spiritual level about whatever we see with the gross eyes about an object or action.

6.1 Effect of energy emitted from the bell

Let us now see how the energy is emitted from the bell and what exactly happens with the help of a subtle drawing.

The dome shaped body of the bell and the clapper when strike with each other create circles of chaitanya which are projected in the atmosphere. The sound generated simultaneously also emits frequencies of chaitanya predominant in Akash tattva (absolute ether element). We can see them in yellow colour. The stroke of clapper emits red coloured divine energy rays. The particles of divine energy which spread in the atmosphere and are of red colour are also seen here. The divine energy and chaitanya generated by the sound of bell drives away the negative energies.

During a puja ritual as mentioned in scriptures when we do puja of bell as an initial part of puja, the bell is gently rang and following holy verse is recited,

The purport being, ‘I am ringing this bell to invoke Deities and to drive away demons.’

7. Difference in sound vibrations of bell and shankh

Now you must have understood the importance of bell and ringing of bell. It must also have been clear that the purport of the holy verse and the knowledge obtained through the medium of subtle drawing match with each other.

One point is clear from the information we have got up till now that sound vibrations are created in every puja ritual with the help of two articles namely shankh and bell. Sound vibrations produced by shankh is called Shankhanad while that of bell is known as Ghantanad.

Close-up: If you get any spiritual experiences by following the view points mentioned in this Satsang or if you have any queries about the topic presented today , please inform us. Our contact details are [email protected]