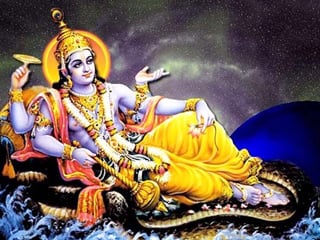 1. Personages and parts of Lord Vishnu

A. Personages : ‘Four personages of Lord Vishnu have been described in the Vishnu Puran, the first reclines on Shesh, the second nurtures creation, the third assumes an incarnation and reinstates Righteousness (Dharma) and the fourth destroys unrighteousness and demons.

B. Parts : Lord Vishnu has four main parts. With one He becomes the unmanifest Brahma, with the second Prajapati like Marich etc., with the third He is the time (kal) and with the fourth He is in the form of animate and inanimate creation. Thus in these four ways He exists in creation.’

All information regarding incarnations with regard to why they are assumed, their mission, types, characteristics, etc. are given in ‘Science of Spirituality : Vol. 7 – Supreme God, God, Incarnations and Deities.’ Here information only on the ten main incarnations of Lord Vishnu has been given.

* At the end of the Kaliyug on the third day of the bright fortnight of Shravan the incarnation, Kalki will be born (Kalki Puran).

This is totally an idea from the Vedas.

C. Implied meaning : Just as a fish swims against the stream of a river, that is towards its origin so also a seeker should go to his place of origin, that is, to The Supreme God. This is what It teaches us.

B. Idols : Idols of Nrusinha (the man-lion) and Varaha (the boar) are found all over India in abundance; however there are very few of the Kurma incarnation found separately.’

C. Implied meaning : Just as the tortoise withdraws its four limbs, head and tail into its shell so also one should control the six foes of the soul (shadripu).

B. Idols : According to the text Vaikhanas Agam the idols are of the following types.

B. Idols :The body is that of a man and the head that of a ferocious lion.

C. Implied meaning of some incidents

D. Ritualistic worship : Since it is difficult to tolerate the radiance of Nrusinha, He is worshipped after the back of His idol is adorned with eyes, whiskers, etc. Similarly the eyes of Balaji of Tirupati are half open as one cannot tolerate His radiance.

E. Nara-Narayan : Nara was created from the human part of Narsinha and Narayan from the face of a lion (Kalika Puran 29). Refer point ‘Nara-Narayan’.

Vaman is the son of Kashyap and Aditi. His other name is Urukram. Urukram means one having a wide stride.

A. Mission : He kept Bali a demon king, in bondage.

C. Implied meaning : The three footsteps that Vaman asked King Bali for, describe the all pervading nature of Vishnu. With His three footsteps Vaman encompassed the earth, space and the sky (or the earth, heaven and hell). (Refer point ‘Vishnu’s advance (Vishnukram) ’.)

One comes across stories about Parshuram in the Ramayan, the Mahabharat and in some Purans. There is no separate mythological text (Puran) about Him unlike the incarnations preceding Him.

A. Parents : Sage Jamadagni of the Bhrugu dynasty and Renuka were the parents of Parshuram. Renuka was the daughter of a Kshatriya (warrior). However Jamadagni being a Brahman Parshuram too became a Brahman. The ashram of Sage Jamadagni was situated on the banks of the river Narmada. Parshuram was born there in the nineteenth Tretayug (in the transitional period between the Treta and Dvaparyugs according to the Mahabharat). Renu means particles of earth. Renuka undertook spiritual practice of the water element. Hence she could fetch water in pots made of wet clay. Jamadagni had done spiritual practice of the fire element. Jamat is a type of fire. Jamat also means a resolve made with a definite purpose.

D. ‘The territory of Parshuram : The Salher mountain is situated at the northern end of the Sahyadri range. Over there, there is a fort from the middle ages with a temple of Parshuram at its peak. Two footsteps four times the size of the footstep of an average person are engraved in the earth at a distance of 100 feet to the north of the temple. They are designed in the stance adopted by a person while shooting an arrow from a bow. It is said that Parshuram shot an arrow into the ocean from here and made it recede.

An ancient temple of Parshuram is located in the Kangada district of Punjab. In the Konkan there is one on a mountain situated five miles from Chiplun. The temple has three idols standing in a row, their names being Kama, Parshuram and Kal. The idol of Parshuram is a little taller than the others. The three idols are arranged such that they represent Brahma, Vishnu and Shiva respectively.’

E. Idols: The body of the idol is huge like that of Bhim. It has matted hair locks and sports a bow on the shoulder and an axe in the hand.

F. Ritualistic worship : Parshuram being an incarnation of Lord Vishnu is worshipped as a deity worthy of worship. His birthday (jayanti) which falls on the third day (trutiya) of the bright fortnight of the Hindu lunar month of Vaishakh is celebrated both as a vowed religious observance (vrat) and a religious festival (utsav).

Information on Rama is given in ‘Rama’.

Information on Krushna is given in ‘Krushna’. Krushna being an absolute incarnation (purnavtar) is not referred to as an incarnation but as Lord Vishnu Himself who has assumed an incarnation.

A. Birth : ‘He is the tenth or twenty-first incarnation of Lord Vishnu. He will be born on the third day (trutiya) of the bright fortnight of the Hindu lunar month of Shravan at the end of the Kaliyug to a Brahman named Vishnuyashas in the village Shambal of Kikat. His lineage (gotra) will be Parashar.

B. Mission : He will embark on the conquest of the earth on His horse named Devdatta. He will destroy the evil and unrighteous and reinstate Righteousness (Dharma). He will destroy His enemies, the evildoers and rule the world. The priest Yadnyavalkya will assist Him in this mission and finally at the age of twenty-five He will renounce His body at the confluence of the rivers Ganga and Yamuna. The Bhavishya Kalki Puran predicts that after this the Krutyug (Satyayug) will commence.

C. Idols : The Hayshirsha Pancharatra and the Agni Puran describe the image of Kalki in two different ways – one with two arms and the other with four arms. The Chaturvarga Chintamani describes His idol with two arms as –

Meaning : Kalki wields a sword in one hand, is seated on a horse, is mighty, is the destroyer of evildoers and has two arms.’