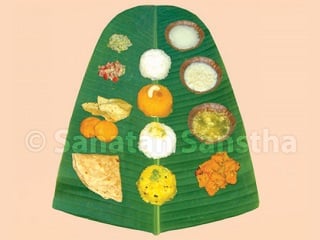 It is a common practice in Hinduism / Hindu Dharma to offer food to the Deities during ritualistic worship or puja at home or temples. This offering is called as Naivedya. It signifies the actual gross state of the individual. Offering Naivedya is the last step in puja. The food items to be offered to each Deity is predetermined. It is said that every Deity has some favourite food item which is offered as Naivedya to Him / Her, for example, kheer or shira for Vishnu, modak for Ganapati, payas for Goddess. The specific food item offered to a specific Deity attracts more frequencies of that respective Deity. After offering the Naivedya, the Deities subtly accept it afterwards this offering is called as Prasad, which is partaken by everyone. When this Naivedya is partaken as prasad, we benefit from the energy of that Deity in it. In this article gives information about spiritual significance of offering Naivedya and various aspects of this act.

1. How to offer Naivedya to the God ? 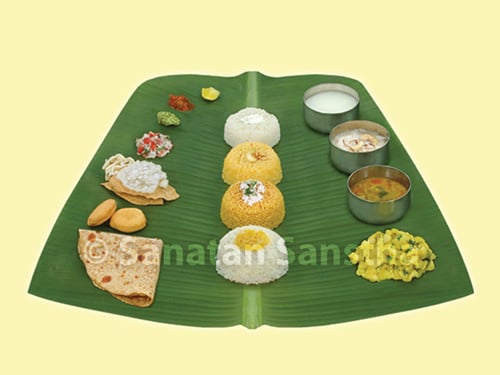 A. While preparing Naivedya, less amount of red chilli powder, salt and oil should be used; sattvik substances such as ghee (Clarified butter) should be used in ample quantity.

B. Banana leaf should be used for offering Naivedya.

C. Salt should not be served on the leaf prepared for Naivedya to a Deity.

D. Keep the leaf (on which the Naivedya has been served) covered.

I. ‘We should have a bhav that the Naivedya offered is reaching the Deity and the Deity is consuming it.’

J. After offering Naivedya (usually in small quantity), mix it with the rest of the food, so that those who eat this food beneﬁt from it.

2. What should be the bhav of the individual who is offering Naivedya ?

Bhav is important when offering any food item to a Deity. Greater the bhav of the individual offering Naivedya, greater is the possibility of the food being accepted by the Deity. While offering Naivedya, we should have a bhav that the Naivedya being offered by us is reaching the Deity and the Deity is accepting it.

3. What should be offered as Naivedya ?

A. Why should salt not be served in the plate / leaf used for offering Naivedya ?

Salt is associated with Pruthvitattva (Absolute Earth Principle) and apatattva (Absolute Water Principle) and hence, the proportion of Raja -Tama predominant waves attracted to it is greater. Therefore, pinch of salt should not be served in the plate / leaf used for offering Naivedya. However, items prepared using salt can be offered to the Deities.

B. Why are sattvik dishes prepared for Naivedya?

Use minimum quantity of chilli, salt and oil when preparing dishes for Naivedya, since these substances are Raja-Tama predominant. Use more of ghee, since it is sattvik. It makes the other substances sattvik too. Serve as many sattvik dishes as possible in the plate / leaf used for offering Naivedya, since such food items have a greater ability to imbibe the sattvik waves emitting from Deities in the form of blessings.

4. Why should the Naivedya be kept covered before offering it to a Deity?

When covered, the emission of waves from the food items into the atmosphere is controlled.

5. When offering Naivedya, how should the banana leaf be placed ?

Naivedya is offered to a Deity on a banana leaf. When compared with the stalk of a banana leaf, its tip has greater ability to emit sattvik waves. sattvik waves emit from the tip of the banana leaf like a fountain. These fountain-like waves help in reducing the proportion of Raja-Tama components in the environment around the individual. Hence, while offering Naivedya to the Deity, the stalk of the leaf on which the Naivedya is served should be towards the Deity and its tip should be towards us. 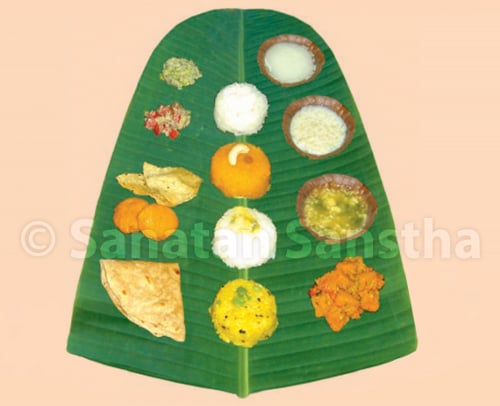 The banana leaf with Naivedya shown in the arrangement above symbolises the state of the individual. In the actual arrangement do not place the Naivedya leaf. Offer Naivedya only after puja has been completed. For convenience, before commencing puja, move the platter to the right of the panchapatra and ritualistic spoon.

6. Why are tulsi leaves used while offering Naivedya to a Deity ?

When tulsi leaves are used for offering Naivedya to a Deity, it reaches the Deity faster, Naivedya becomes sattvik and the possibility of attacks due to negative energies reduces.

7. How many times water should be sprinkled around the Naivedya ?

While offering Naivedya, sprinkle water around the plate / leaf only once in a clockwise manner (to make a mandal. Do not sprinkle water in an anti-clockwise manner, because this activates the dormant tiryak (Raja-Tama-predominant) waves in the universe and a dynamic sheath of these distressing waves is created around the plate. Due to the waves emitting from this sheath, the Tama component in the praṇamaya-kosha (Vital energy sheath) of the individual increases, which makes it restless.

Reduction in the possible distress caused by negative energies through the medium of food: Waves emitting from the mandal drawn around the plate converge towards the centre below the plate, which activates the unmanifest energy of the associated Deity present in the centre, and are once again emitted into the environment from the centre. This helps in creation of a covering of subtle sattvik waves on the plate. Hence, while eating the food, the distressing waves emitted by negative energies present in the environment are obstructed from spreading into the body through the medium of food. Similarly, due to the sattvik waves emitting from the water, the black covering of Raja-Tama-predominant waves that has formed on the food is also reduced to some extent.

sattvikta (Purity) spreading rapidly in the body: In this way, we get the benefit of eating sattvik food. The subtle air generated from the waves emitting from such sattvik food is imbibed quickly by the cells of the body and the sattvikta generated by the food spreads quickly in the individual’s body.

8. Why should the eyes be closed while offering Naivedya ?

The sight of food leads to a desire to eat it. To avoid this and be able to offer pure Naivedya devoid of any desire to the Deity, eyes should be closed while offering Naivedya to a Deity.

9. Why is Naivedya offered to the Deity from below to the upward direction ?

Sattvik waves of superior Deities are active in the upper strata of the atmosphere. The auspicious ritual of puja is one that involves invoking Deities in the upward direction and materializing the Principles of Deities associated with the Tejtattva. Hence, this process is associated with the sagun (Materialized). The daily puja is an auspicious act and hence, Naivedya is offered to the Deities (Idols or pictures) from below to the upward direction.

Performing actions with the right hand is auspicious and hence, a Deity is invoked with the right hand. The act of taking food to the Deity’s mouth symbolizes devotedly touching the Principle of the Deity and awakening the Deity. It is essential that the medium used for touching the Deity while awakening it should also be sattvik, equally sensitive and symbol of the kriyashakti. That is why, the act of holding a tulsi leaf and taking the hand higher towards the Deity’s mouth is performed. The hand moves in the upward direction and the vibrations of the Deity too are activated at the subtle level to a greater extent in the upper atmosphere. That is why the act of taking the morsel in the upward direction towards the mouth is given precedence. This act is associated with the sagun, meaning, equal importance is given to bhav as well as action. Greater importance is given to action in the inferior sagun, while greater importance is given to bhav in the superior sagun.

10. How does Deity accept the Naivedya ?

First, the Deities activate the akashtattva present in them, because it helps awaken the other Principles. Next, as per the need, Vayutattva and Tejtattva are awakened. Deities accept the Naivedya through the medium of these awakened Principles.

11. The time required by the Deity to accept Naivedya

It takes only a few seconds for the Deity to accept Naivedya.

A. The taste of halwa (A sweet dish prepared with semolina, sugar and ghee) improving merely by offering it as Naivedya to His Holiness Bhaktaraj Maharaj: ‘On the day of Gurupourṇima (Full moon day of the month of ashadha, also called Vyas Pourṇima) in 1999, we decided to perform Gurupūjan at home and leave for the venue of Gurupourṇima programme by 10.00 a.m. However, since we were in a hurry in the morning, the halwa (Indian sweet) I prepared did not turn out to be good. There was no time to make it again, therefore, we offered the same halwa as Naivedya to the photo of His Holiness Bhaktaraj Maharaj (fondly known as Baba) and performed the puja. Then, my mother offered me some halwa as prasad on my palm. I ate it and said to my mother, ‘The halwa has been prepared well and tastes just like the prasad of ‘Satyanarayaṇ puja’. Hearing this, my mother kept the vessel with the halwa in front of me. Upon tasting the halwa in the vessel, I realised that there was a lot of difference between the halwa as prasad and the halwa in the vessel.’ – Mrs Arati Nadkarni, Ponda, Goa.