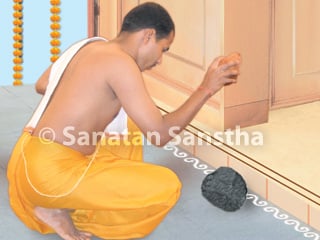 Udghatan (Inauguration), ‘ud’ means to activate or manifest. Thus, commencing a function by invoking Divine frequencies to a venue through prayers is called udghatan. The coconut has great significance in Hinduism. It has religious and social connotations. It is also known as Shrifala, or “the auspicious fruit” to be offered to God. Coconut breaking is a symbolic act of submitting oneself completely to the God. Before starting anything auspicious, coconut is offered. Let us understand why inauguration ceremony should be done by breaking a coconut instead of western tradition of inaugurating by cutting a ribbon.

Since every action in the Hindu Dharma is based on the science of Spirituality, a individual should always be inclined
towards abiding by Dharma. Only then does it help him obtain true benefits. Seeking Divine blessings for the success of any function or ritual is necessary. Performing the ritual of inauguration attracts Divine waves to the venue and creates a protective sheath at the venue of the function, thus controlling the movement of negative vibrations there. That is precisely why, inauguration ceremony should be done in a ritualistic manner, meaning done as per the underlying spiritual science.

Breaking a coconut and lighting a lamp at the venue are the important rituals in the purification of a premises, that is, in the ritual of inauguration.

A. Inauguration of a stage programme

B. Inauguration of shops, establishments etc.

Since shops and establishments etc. are mostly always associated with worldly matters, when inaugurating them, it is sufficient to break a coconut in the premises; lighting a lamp is not necessary

3. Importance of inauguration done by Saints

The mere presence of a Saint at an inauguration venue is sufficient to attract and activate the subtle Divine waves. Due to their presence, the atmosphere gets purified and enriched with Chaitanya, thus creating a protective sheath around the venue. Hence, when a Saint inaugurates a premises, even breaking of a coconut is not necessary.

4. Why is the western tradition of inaugurating by cutting a ribbon inappropriate ?

Cutting anything represents a destructive action. Cutting a ribbon amounts to breaking or ending its continuity. Any action leading to an end represents tamasik nature. Thus, inauguration done by cutting a ribbon in anyway does not help in overcoming the distressing vibrations in the premises.

An average individual is Raja-Tama-predominant. When cutting the ribbon, its ego is awakened. The Raja-Tama-predominant waves emanating from its body pollute the surrounding atmosphere. The scissors held in the hand are also charged with Raja-Tama particles. Cutting the ribbon with such a scissor imparts momentum to the RajaTama particles surrounding the ribbon and from the cut ends of the ribbon, swiftly moving Raja-Tama waves are released like a fountain into the environment. Any action producing distressing waves is prohibited by the Hindu Dharma. Hence, inauguration by cutting a ribbon is prohibited.

5. Ill-effects of inaugurating by cutting a ribbon

1. Tama-predominant vibrations are emitted into the environment due to sound generated from actions such as cutting, slitting etc.

3. An individual who performs inauguration by cutting a ribbon has more proportion of ego. The Tama-predominant vibrations generated while cutting a ribbon, besides spreading in the premises, also spread in the body of the person who cuts the ribbon, thereby increasing his ego. Therefore, thoughts such as ‘I am an important person’ begin to develop in his mind. Hence, an inauguration should be performed at the hands of an individual who as bhav, or
Saints since they have less proportion of ego.

5. Negative energies attack the premises from all the ten directions due to cutting of a ribbon.