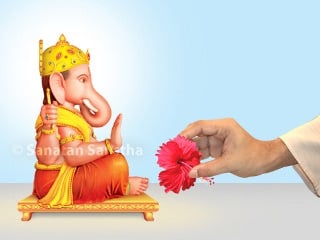 Offering flowers is an important part of the Hindu tradition. Many people like to decorate Deities with flowers in temples at their homes, as it gives a divine look to the God (Deity). Specific flowers have greater ability to attract the pavitraks  (Subtlemost particles) of specific Deities when compared with other flowers. When such flowers are offered to the God, we benefit immediately from the God’s Chaitanya in the Idol. Let us find out in detail through this article, how does this act of offering flowers to God is spiritually beneficial to individual.

1. Which flowers are offered to which God ? 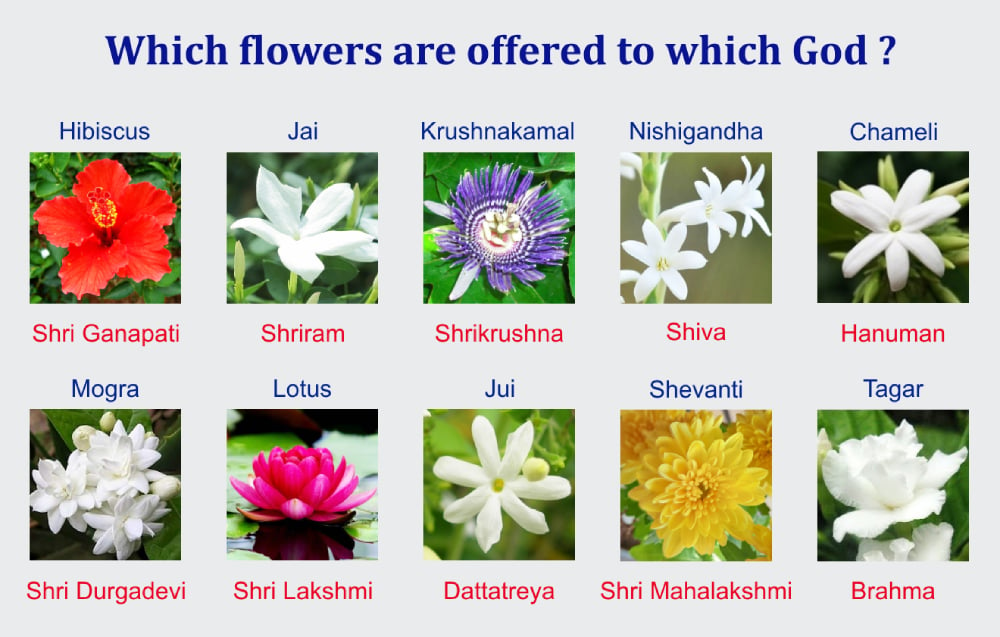 The waves emitting from a Deity, the number of flowers that represent the Principle of the Deity and the specific arrangement of the flowers associated with that Principle, all this helps retain the active waves emitting from the Deity in that arrangement and their emission through the fragrant particles of the flowers as per the need. The Deity Principle is attracted swiftly to a specific number of the specific flowers.

Progressing through the three paths of Yoga – Karmayoga, Bhaktiyoga and Dnyanyoga, the individual moves from ‘Many to one’, that is, towards the nirguntattva.

3. Why should the sequence of offering flowers be from bright flowers to white flowers ?

Moving from the apex of the cone towards the end symbolizes going from dvait to advait. Conversely, beginning with the small bright flowers and then offering big white flowers in the end and thereby, merging with the expansive nirgun (Non-materialized) form of God, amounts to performing sagun (Materialized) worship through the medium of flowers and attaining the nirgun. Instead of the shape / size of the flowers, give importance to the sequence of their colour; because, due to the contact of the colour-waves emitting from the flowers the specific Deity Principle is awakened sooner.

4. Why should a flower be offered with its stalk towards the Deity ?

When offering a flower to a Deity, let its stalk be towards the Deity and the plume be towards us. Waves of Deities attracted by the stalk have a greater proportion of nirgun waves. When this flow of nirgun waves enters the stamens and petals, the movement of colour and fragrant particles in them convert the nirgun waves into sagun waves with the help of Pruthvitattva and apatattva. These sagun waves are emitted towards the individual through the medium of colour and fragrant particles. Since the physical body of the individual is made of Pruthvitattva and apatattva, the waves transmitted through the medium of colour and fragrant particles are easily imbibed by the individual. These waves do not cause any distress to the individual. Instead, the individual is able to imbibe the sagun Chaitanya of the respective Deity to the maximum extent through them. Various Principles are found united in flowers. It is the presence of Pruthvitattva that imparts fragrance to the flowers. Flowers are visible because they have Tejtattva. They can be felt with the hands since they have Vayutattva. Therefore, we receive the Deity’s Principle, sattvik waves and Chaitanya through the medium of fragrance, touch or even mere sight of the flowers and garlands made from flowers.

B. The worshipper receives waves of Shakti in the form of fragrance.

C. Through the picture or the Idol of the Deity, superior level vibrations are emitted; however, the implements or objects used in Deity worship have very little ability to imbibe these vibrations and make them available to the worshipper. A worshipper who has bhav is able to imbibe them very easily.

D. These vibrations are emitted for 2 to 3 hours by the flowers that have been offered to a Deity. As the flower becomes stale, there is a reduction in the emission activity.

5. Do not offer petals or decorative flowers to Deities

6. Why should buds or dried flowers or

flowers that have fallen from a tree not be offered to a Deity ?

7. How should the flowers that are to be offered to a Deity be plucked ?

The tubular section adjoining the petals is known as the stalk. The inertia-laden part behind the stalk is known as the
sepal. The hidden sound in the sepal is laden with inertia, meaning, it is impact-oriented. Whereas, the sound in the void of the stalk is porous; meaning, it is associated with vayu. That is why, these are at the forefront in carrying Chaitanya with them. Do not pluck flowers from the stalk adjoining the flower or stalk of the flower; because, sometimes this breaks the petals, and the ability of the flower to absorb and emit Chaitanya reduces. In some flowers, besides the stalk adjoining its petals, there is a small green part which is in fused below the stalk. Pluck the flowers from this point. In flowers such as Barleria prionitis (commonly known as porcupine flower) or Crep jasmine, these small sepals are found attached below the stalks. Break them, because these sepals create an obstacle in the transmission of the Deity’s Chaitanya towards the stalk. These sepals contain inertia or the Pruthvitattva. Hence, their ability to carry Chaitanya is very little. If they are allowed to remain with the flowers, then through their touch, they lower the functioning ability of the stalk to carry Chaitanya. As a result, the worshipper is unable to obtain the desired benefit of Chaitanya emitting from the Deities. Hence, offer flowers to the Deity only after removing these lower sepals.’

8. Why should we not smell the flowers that are to be offered to a Deity ?

Flowers have the ability to absorb and emit the Deity Principle. When a individual smells the flowers, the ichha-shakti associated with its fragrance in the form of desire enters the subtle chamber of the flower through exhalation. This reduces the functioning ability of the flower. When we smell a flower, the natural Sattva component in it also reduces. Offering such flowers to the Idol of a Deity gives rise to the possibility of the Idol getting charged with Raja-Tama components. This creates an obstruction in the emission of Chaitanya particles that appear in the Idol for the benefit of the devotees. As a result, there is less emission of Chaitanya (for the society). Hence, in a way, smelling flowers to be offered to a Deity is considered a sin.