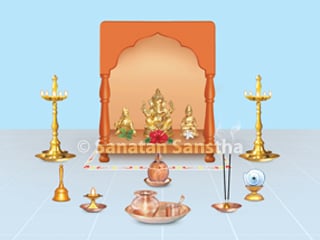 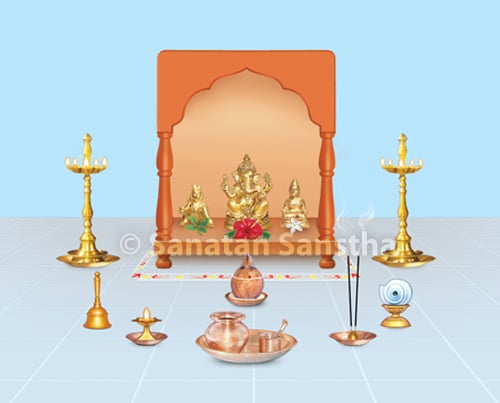 1. Why the temple at home should be placed in the East-West direction?

‘The temple at home should always be in the east-west direction. When the temple faces the east, the waves emitted by the Deity get activated on the strength of kriya-shakti (Energy of action) accumulated in the hollow in the east. This helps the nirgun (Non-materialised) waves of the Deity transform into sagun (Materialised) waves. When the kriya-shakti from the universe associated with the east-west direction manifests due to the waves emitted by the Deity, its direction is mostly upwards. The effect of the upward mobile waves on the environment lasts much longer than that of the downward mobile waves. Hence, for the effect of the sattvik (Sattva-predominant) waves emitted by the Deity to last longer, the direction of the temple at home should be east-west.

On the other hand, when ichha-shakti accumulated in the north-south direction gets activated, it flows mostly downwards. This flow activates the tiryak waves in the environment. This causes obstruction to the sattvikta emitting from the Deity and as a result the benefit obtained by the individual when compared with the first arrangement is less.’

2. What material should the temple at home be made of to increase the sattvikta / positive energy in the house

As far as possible, the temple at home should be made of sandalwood or teakwood. Sandalwood is expensive and may not be viable for the average individual. Comparatively, teakwood is cheaper and has better ability to retain and emit sattvik (Sattva-predominant) waves. Eventually it is the bhav (Spiritual emotion) towards God that attracts the Divine waves to the top of the temple, which are further dispersed in the house as per the requirement.

3. Importance of retaining the original colour of wood for the temple at home?

Though the modern trend is to paint the temple at home with different colours in the name of decoration, it is ideal to retain the original colour of wood, that is, pale brown. God operates through two Principles, namely sagun Principle and nirgun Principle. Pale brown colour symbolises the border between the sagun and the nirgun, meaning the transition phase of the journey from sagun to the nirgun. Human beings with Panchatattvas (Five Cosmic Principles) as their constituents fall in the sagun category and the formless God falls in the nirgun category. Since a simple religious act like worship of a Deity amounts to spiritual practice, it helps the individual in traversing from the state of sagun to nirgun, meaning, from duality to non-duality. Obviously, the pale brown colour of the temple is complementary to this spiritual journey.

5. What should be the shape and size of the temple at home for an average individual? 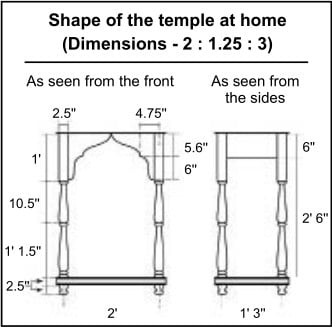 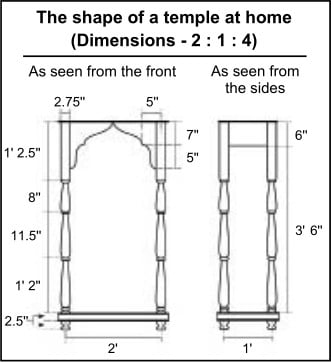 6. In puja, why is it preferable to use implements made of copper and brass?

B. Copper and brass have better capacity to absorb sattvikta : In the earlier times, implements used in worship of Deities were made of copper and brass. Every particle of these two metals has high capacity to absorb the sattvikta. Besides, cleaning these implements everyday with tamarind and lime before pūja removes the black energy enveloping them. 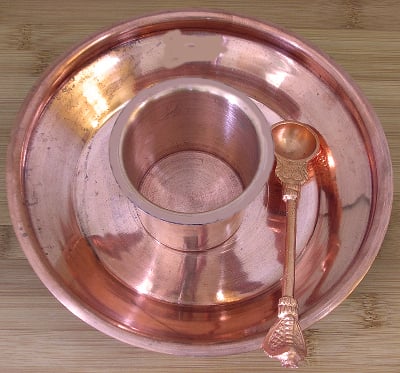 Gold is associated with the Tējtattva. Hence, worshippers of the Gayatri mantra use implements made of gold or gold dust mixed in Vibhūti in order to gain control over the Tējtattva. Gold dust activates the Sun channel (in the body) which is beneficial for worship of Tēj in the body in a shorter time.’

7. Why should the hands be washed if the lamp is touched during puja?

‘While performing ritualistic or mental worship of the Deity, the sattvikta of the lamp increases. The lamp is offering its light unto the Holy feet of the Deity and thereby performing its spiritual practice. When we touch the lamp, the Raja-Tama components from our body enter the lamp. As a result, the sanctity of the lamp reduces. Thus, we become guilty of having obstructed its spiritual practice. Water is all-encompassing. When something is offered to water, it reaches the respective Deity in quicker time. Through the medium of water when our demerits are offered unto the Holy feet of the Deity, the Deities forgive us.’

8. Why `akshata` are being considered important in a platter of puja?

In the middle of the platter place all-encompassing akshata. Since these are in the centre, they attract waves of the five superior Deities – Shiva, Shri Durgadevi, Shriram, Shrikrushna and Shri Ganapati, and get emitted towards the surrounding substances like haldi (Turmeric), kumkum (Saffron) etc. as per the need.

9. What are the benefits of arranging the implements and other constituents of a puja, according to the level of panchtattvas?

A. ‘The Panchatattvas are appropriately balanced and controlled and it helps the individual in maximising the advantage of the sagun and nirgun waves emanating from the Deity.

B. The appeal made to the Deities along with prayers before puja helps the active waves of the respective Deity in the universe to take a sagun form. Depending on the constituent of the Panchatattvas present in them, these Divine waves get attracted to the respective implements in the puja and charge them. It is because of these charged implements, that even the atmosphere surrounding the place of worship gets purified. Further, the physical body of the individual standing within the boundary of this purified environment also becomes sattvik. The combined effect of the sattvik body and sattvik implements helps the individual derive maximum benefit from the Divine waves emitted by the Deity.’

10. Why should the water from the kalash used during puja be offered to tulsi plant and sprinkled in the premises?

‘It is well known that the tulsi plant has great importance in the science of Spirituality. Purity means more of the Sattva component. Tulsi plant has a higher ability to attract pure vibrations from the atmosphere when compared with other plants. Besides, it also emits pure vibrations into the atmosphere throughout the day. When the water in a kalash charged with Chaitanya is offered to the tulsi plant, along with the water, the plant also absorbs the Deity Principle present in it. Then along with its own sattvikta, the plant emits the Chaitanya back into the atmosphere. As a result, a sheath of rhythmic vibrations is formed and it helps maintain purity in the premises and surrounding areas. In a way, this sheath can be referred to as the armour of God. Sprinkling this water in the premises increases the Divine vibrations within the premise, thus purifying it.’

11. Why is a metal coin or a betel-nut placed within and then a coconut placed on a kalash that is used to install a Deity?

A. Placing a betel-nut in the kalash : Betel-nut emits waves of Raja component. By placing it in water, the sattvik water becomes Sattva–Raja-predominant. The Raja component enhances the ability of this water to emit the sagun Principle of the Deity. Also, due to the particles related to Pruthvitattva in the betel-nut, retention of Sattva particles related to the nirgun Principle present in water is facilitated. This in turn facilitates retention of the sattvikta in water for longer periods.

B. Placing a coconut on the kalash : When a coconut is placed on the kalash, through the tip of tuft of the coconut, the Principle of the worshipped Deity gets attracted to the coconut and gets transferred to the water in the kalash. This act of transfer generates rhythmic ripples of the waves of Deities. The ripples are very subtle in nature. Water is more clean and pure, and hence absorbs the Sattva particles in the Divine waves to a large extent; however, deficiency of the Raja component in the water reduces its capacity to emit the sagun Principle.’

12. What is the importance of blowing a conch in puja?

13. How to test the genuineness of a conch?

A melodious sound can be heard when a genuine conch is held to the ear (even without blowing).

14. Why should a conch be placed with its tip facing the Deity?

The tapering hollow of the conch helps in accumulation of energy emitted by Deities. When this accumulated sagun energy manifests as per the bhav of the individual, the waves in it are transformed into waves of the form of high velocity marak rays. When this marak form of energy leaves the conch from the hole at other end, the rays are converted into circular waves as they enter the atmosphere. The spread of these circular waves and the duration of their effect on the environment are more when compared with that of the rays.

The energy emanating in the form of rays has a higher content of the maraktattva. Hence, to avoid any distress to the individuals, the tip of the conch must face the Deity. As a result, the circular waves emanating from the opening in the conch help maintain the required level of marak form of Chaitanya in the premises for a longer period. The negative energies fear the conch because of the marak energy that it emits.

Reference : Sanatan Sanstha’s Holy Text on ‘Temple at home and implements used in the worship of God’ and ‘What is the Importance of the Substances used in Ritualistic Worship?‘