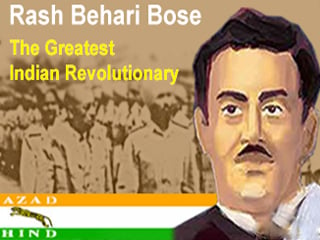 Rash Behari Bose was one of the key organizers of the plan to assassinate Lord Charles Hardinge. 21st January is the Death Anniversary of Rash Behari Bose

Rash Behari Bose played a crucial role in the Ghadar Revolution, a plan to attack British army from the inside. Rash Behari Bose was the founding father of Indian National Army (Azad Hind Fauz) that Subhash Chandra Bose capitalized on later. Rash Behari Bose was born on May 25, 1886, in village Subaldaha, Bardhaman district, in the province of Bengal. His mother passed away in 1889 when Rash Behari was still a baby. He was brought up thereafter by his maternal aunt Vama Sundari.

Rash Behari Bose was initially educated at Subaldaha under the supervision of his grandfather, Kalicharan, and later in Dupleix College at Chandernagore. At the time Chandernagore was under French rule thus, Rash Behari was influenced by both British and French culture. The French Revolution of 1789 had a deep impact on Rash Behari. Rash Behari Bose was not a very attentive student. He was a day-dreamer, his mind preoccupied with revolutionary ideas. He was more interested in his physical prowess than his studies.

Roots of the Patriotism in Rash Behari Bose

Rash Behari Bose did not get a chance to complete college because his uncle got him a job at Fort William. From there he transferred to the Government press in Shimla on his father’s wish. He was appointed the copy-holder in the press and was able to master English and typewriting. After some time he moved to the Pasteur Institute in Kasauli. Rash Behari was not happy with these jobs.

On a colleague’s advice,Rash Behari Bose went to Dehra Dun as a guardian tutor in the house of Pramantha Nath Tagore. He got a clerical post at the Dehra Dun Forest Research Institute where through hard work, Rash Behari became a head-clerk.

Beginning of Rash Behari Bose’s life as a Revolutionary

Rash Behari Bose suddenly came in to prominence after 23rd December 1912 when bombs were thrown at Lord Hardinge, the then Viceroy of India. The planning for it was ingenious. At a conclave in Chandan Nagar, the suggestion for an attack on Hardinge emanated from Shreesh Ghosh, a dare-devil friend of Rash Behari. But some present thought that it was unpractical. Rash Behari Bose was reflecting and spoke only that he was ready and resolute but laid two conditions – that he should be supplied with powerful bombs and that he should have a young man of unimpeachable revolutionary character. Both were obtained and the first rehearsal was made on Diwali of 1911, amidst sound of crackers all round. The bombs burst to Rash Behari’s satisfaction. But he had to wait for more than one year, which, however, was fully utilised in rehearsing for the outstanding action on 23rd December.

The young man who came from Chandan Nagar was one Basant Biswas, a handsome boy of 16 years. He could easily be dressed up as a girl and get mixed up with other women sitting on the spacious terrace of a building in Chandni Chowk. All were eagerly waiting for the Viceregal procession. The bombs had to be hurled by Basant on the target. He had actually practised it for months in the garden of Raja PN Tagore at Dehradun. Rash Behari was serving with the Forest Research Institute there, and Basant was supposed to be his servant. Cigarette tins were filled with stone pieces and were hurled at the imaginary height of Hardinge, seated on a Howdah. On the previous day Rash Behari took his young ‘girl friend’ in a Tonga and had a ride through the roads of Chandni Chowk, which was to be the venue the next day.

It was the 23rd December 1912. The Viceroy and the Vicerene were on the elephant back. Ladies were excitedly waiting for the procession to arrive. Basant (dressed as a girl) was one amongst them. The point chosen was the Clock-tower in Chandni Chowk, near the Punjab National Bank. The bomb was to be thrown when the elephant would be just in front. Rash Behari would be at a nearby point and Awadh Bihari would be just opposite, to throw the bombs if Basant somehow failed.

The atmosphere was electrifying, when it just occurred to Rash Behari that the practice of bomb throwing in cigarette tins at Dehrudun would be of no avail. It was from the ground to the imaginary height of the target on an elephant back. He just rushed in and asked Basant to enter the bathroom and quickly change his Sari to male clothes which he was carrying. There came out a handsome boy in place of a beautiful girl. In the all round excitement of the moment, none noticed the ‘sartorial change of sex’ of the boy from Bengal. He came down and got mixed up with the crowd on the foot path. But the bombs were not thrown by him but probably by Awadh Bihari. The Viceroy was seriously injured and was taken to a famous doctor, A.C. Sen, nearby. Awadh Bihari was later hanged but Rash Behari could not be touched.

Rash Behari Bose returned to Dehradun by the night train and joined the office the next day as though nothing had happened. Further, he organised a meeting of loyal citizens of Dehradun to condemn the dastardly attack on the Viceroy. Who on earth could imagine that he was the same person who had masterminded and executed the most outstanding revolutionary action. Lord Hardinge in his My Indian Years had described the whole incident in an interesting way.

Though Hardinge escaped death, Rash Behari’s efforts continued unabated. Actually, it was a larger area of operations, a sort of an all India revolution concentrating mainly on the various contonments. As a god-send the leadership for it came from unexpected quarters. By 1914, many ‘explosive elements’ came to India from America, Canada and the Far East. They were, broadly speaking Ghadar elements. About four thousand of them were already in India. They had brought some arms and money. But all that they lacked was a proper leader. After the attempt on Hardinge, their eyes fell on Rash Behari.

At this juncture came Vishnu Ganesh Pingle, an American trained Ghadr, who met Bose at Benares and requested him to take up the leadership of the coming revolution. But before accepting the responsibility, he sent Sachin Sanyal to the Punjab to assess the situation. Sachin returned very optimistic.

In mid January 1915, Rash Behari first announced the news of the impending revolution at a private meeting at Benares. The war in Europe had already started. Most of the Indian army was shifted to other theatres of war. Of the thirty thousand men left at home, most were Indians whose loyalty could be won over easily. In this context Rash Behari was considered the only leader, particularly after the heroic Hardinge episode. Various persons were placed on duty at various places. Men were sent far and wide to propagate the message at the forthcoming revolution. Trusted and tried Ghadrites were sent to some contonments to infiltrate into the army.

Rash Behari Bose was both the brain and brawn of the coming revolution. Not only was he capable of cool and clear thinking, he also had indefatigable energy to organise a revolution of such a magnitude, moving from place to place, always alert to evade the ever alert police in his pursuit. He even organised a few rehearsals at Khairon, Firozpur and Lahore.

February 21, 1915, was the date on which the signal of revolution would be given. At the very out-break, British officers would be rounded up and police outposts occupied. When it would spread to the Frontier Province, the tribals would come to the cities and capture the govt. establishments. Rash Behari personally would move from one contonment to another in the dress of an army officer.

But on February 15, Kripal Singh, a soldier, and also a new recruit to the revolutionary party, was seen suspiciously moving about the Lahore station, contrary to instructions. He was to have been at Mian Mir with a message from Rash Behari to the troops. The revolution planned for the 21st was fizzled out.

Rash Behari Bose left Calcutta on May 12, 1915. He went to Japan as Raja P.N.T. Tagore, a distant relative of Rabindranath Tagore. Some historians say that Rabindranath Tagore was aware of this impersonation. Rash Behari reached Singapore on May 22, 1915 and Tokyo in June. Between 1915 and 1918, Rash Behari lived almost like a fugitive, changing his residence 17 times. During this period he met Herambalal Gupta and Bhagwan Singh of the Ghadar Party. Japan was an ally of Britain’s in the First World War and tried to extradite Rash Behari and Herambalal from Japan. Herambalal escaped to U.S.A. and Rash Behari ended his hide and seek by becoming a Japanese citizen. He married Tosiko, daughter of the Soma family who were sympathetic toward Rash Behari’s efforts. The couple had two children, a boy, Masahide, and a girl, Tetaku. Tosiko died in March 1928 at the age of 28

Rash Behari Bose learned Japanese and became a journalist and writer. He took part in many cultural activities and wrote many books in Japanese, explaining India’s viewpoints. It was due to Rash Behari’s efforts that a conference was help in Tokyo from March 28 to 30, 1942, for discussion on political issues.

Following a conference held in Tokyo on 28th March 1942, it was decided to establish the Indian Independence League. After a few days it was decided to make Subhash Chandra Bose as its president. The Indian prisoners that were captured by the Japanese in Malaya and Burma were encouraged to join the Indian Independence League and the Indian National Army. It was the efforts of Rash Behari, along with Captain Mohan Singh and Sardar Pritam Singh, due to which Indian National Army came into existence on September 1, 1942. It was also known as Azad Hind Fauz.

Death of Rash Behari Bose and honour by the Japanese Government

It was on 21st January 1945 that Rash Bihari Bose died in Tokyo before the end of World War II. The Japanese government honoured him with the highest title given to a foreigner – The Second Order of Merit of the Rising Sun. But the honour done by the Emperor of Japan on his demise is more touching. The Imperial coach was sent to carry the dead body of the Indian veteran revolutionary. But we, in independent India, have failed even to get the ashes of the great patriot back to the motherland. What a shame ?