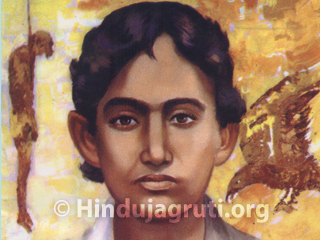 Hindu Dharma has a glorious past of great Saints. Several Self-realised Saints became Gurus and showed the path of God-realisation to many. They also taught Spirituality to society through their conduct and actions. Their mission was not limited to Spirituality. When the need arose they strived to protect the Nation in crisis. Some Saints travelled the world over selflessly, spreading the spiritual knowledge of Bharat. Millions of people abroad are benefitting from that. For lakhs of years, the Saints took tremendous efforts to preserve Vedic Knowledge, the pride of Bharat. They also simplified this knowledge by creating many subjects connected with human life. The most important thing that the Saints of Bharat have gifted to the world however is the ‘tradition of the Guru and disciple’.

The current scenario however is different. Cricketers, film heroes and heroines have become role models for Hindus. Also the two defects of selfishness and narrow-mindedness have overcome Hindus so much that it is causing great harm to Hindu society. Under such circumstances it is the need of the hour to study and follow the life of Saints who have imparted the teachings of sacrifice, unconditional love, righteousness, patriotism, social upliftment and kshatradharma (duty of a warrior). Here, we are publishing matter about them to create social awareness. We pray to God to inspire Hindus to study and follow their biographies and teachings.

Thousands of freedom fighters have come and gone. One among those is Khudiram Bose. It was this exceptional hero who hurled the first bomb on the British who were curbing Indians from their birthright of 'freedom (swatantrya)'. However, his freedom struggle did not last long because at the tender age of nineteen he became a martyr. He was one of the youngest revolutionaries of Bharat’s freedom struggle.

Khudiram Bose was born on 3rd Dec 1889 in Habibpur, Medinipur to Laxmipriya Devi and Troilokyanath Bose. The Bose couple had yearned for a male child but unfortunately did not live long enough to enjoy their happiness. They unexpectedly died when Khudiram was just six. The boy's elder sister Anurupadevi and his brother-in-law Amritalal had to shoulder the responsibility of bringing him up. He had to move on to Tamlook where he was admitted to Hamilton school. Like any other boy he was interested in reading detective novels and loved to play the flute. It was in his school days that he was inspired by the activists, Satyendranath and Gyanendranath Bose who headed a secret society to campaign and fight against British supremacy.

A born patriot, even at the age of seven or eight years, Khudiram Bose thought, 'Bharat, our country is great. Our ancestors say that this has been the home of knowledge for thousands of years. Why, then, are the red-faced British here? Under them, our people cannot even live as they wish. When I grow up I must somehow drive them out.'

These thoughts ruminated in his mind all day. Thus whether he read a book or sat down to eat he would see a red-faced, green-eyed Englishman glaring at him. This caused strange pain to his heart.

Even at that tender age, Khudiram had thought so deeply about the country's freedom. But how was he going to achieve it ? This was haunting him all the time. How could he perform his duty unto the country successfully?

When engrossed in this, one day Khudiram heard the cry 'Vande Mataram (I salute You O Motherland)' and 'Bharat Mata Ki Jai (Victory to Mother India)’. He was thrilled by these cries, his eyes glowed and he felt elated.

It was February 1906. A grand exhibition had been arranged at Medinipur in Bengal. The intention was to obscure  the injustice of the British then ruling India, through articles like pictures and puppets which could create the impression that the British rulers, though foreigners, were doing much to help the people of India. There were big crowds to see the exhibition.

Khudiram was distributing handbills having the title 'Sonar Bangla' to the people. It carried the slogan ‘Vande Mataram'. In addition, the true purpose of the British in putting up the exhibition was also exposed. The various forms of British injustice and tyranny were also explained.

Among the visitors to the exhibition, there were a few loyal to the King of England. They were opposed to the people who exposed the injustice of the British. Words like ‘Vande Mataram', 'Swatantrya' (freedom) and 'Swarajya' (self-rule) were like pins and needles to them. They tried to prevent him from distributing the handbills. Their eyes red with anger, they glared at him, rebuked and frightened him. But ignoring them Khudiram calmly continued his task. When some people tried to capture him, he made a smart escape.

Finally a policeman caught hold of his hand and pulled the bundle of handbills. But it was not so easy to catch him. With a jerk he freed his hand,  then swinging his arm forcefully struck the nose of the policeman. Snatching the handbills he warned the policeman, “Don't dare to touch me ! Let me see how you arrest me without a warrant".

The policeman who had received the blow rushed forward but Khudiram had disappeared in the crowd.

As people burst into cries of ‘Vande Mataram' the police and loyalists of the King were bereft of words and also humiliated.

Later a case was filed against Khudiram but the court set him free on the ground of his tender age.

It was on the night of April 30, 1908 that Khudiram and Profulla Chaki approached the European Club at Muzaffarpur. With a revolver and a bomb they hid waiting for Kingsford to come out.

In a short while a horse carriage drew from the compound of Kingsford's mansion. Khudiram who held a bomb in his hand, whispered to Profulla, "Run away as soon as I throw the bomb. Do not worry about me. If I survive, I shall touch the feet of our revered teacher. Be ready to run. Vande Mataram!"

When the carriage was just opposite him Khudiram aimed and threw the bomb inside.

The first bomb hurled at the British by India leapt from a young hand. As the bomb touched the coach there was a deafening explosion. A blood-curdling cry was heard. Without waiting to see what would happen next, Khudiram and Profulla fled in different directions.

Kingsford was lucky. He was not in the carriage on which Khudiram threw the bomb. The people in it were his guests, the wife and daughter of a lawyer named Kennedy, and a servant. The daughter and the servant died instantly. Mrs.Kennedy who was seriously injured died a day or two later.

Prafulla committed suicide when cornered by police at the Samastipur railway station. Khudiram was later arrested about twenty kilometres from Samastipur and twelve kilometres from Pusa Bazaar where Rajendra Agricultural University was first established. The railway station where Khudiram was arrested as he was drinking tea was earlier known as Pusa Road and recently has been renamed as Khudiram Bose Pusa (KRB Pusa). He was the first, youngest freedom fighter of Bharat.

A trial was carried out for two months on this Muzaffarpur bombing and other charges of bombing carried out by him. Although the leading Calcutta advocate Narendra Kumar Basu defended Khudiram's actions in defence of his motherland to his best, Khudiram was sentenced to death for the murder of women and children. The sentence was carried out, and he was hanged on August 11, 1908. Legend says that as he was hanged he was still smiling.

Not only did Khudiram himself became immortal, but he also inspired others by his sacrifice, to become immortal. In course of time, thousands of young men and women followed in his footsteps. While Kingsford had to quit his post, the British had to quit Bharat itself.