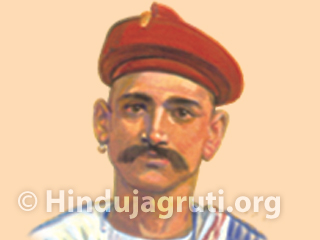 18 April is the martyr day of Damodar Hari Chapekar !

The purpose of this article is to let the people know about the revolutionary who in the prime of his life, was inspired to free his country from the shackles of the British and sacrificed his life to achieve his goal !

The family of Damodar Hari Chapekar originally hailed from Velaneshwar in Konkan, Maharashtra but his ancestors migrated to Chinchwad near Pune where on 25th June 1869, Damodarpant was born. Since his childhood, Damodarpant and his brothers Balkrushna and Vasudev were inclined towards doing something to free India from the bondage of the British. To prepare himself for undertaking revolutionary activities, Damodarpant used to do 1200 ‘Surya-namaskars’ everyday; he had also practiced to run whlie covering a distance of 11 miles in an hour. Haribhau, Damodarpant’s father used to visit Mumbai during every ‘Chaturmaas’ (the 4 auspicious months to undertake spiritual practice as per Hindu calendar) to deliver discourses. During the ‘Chaturmaas’ of 1896, Damodarpant and Balkrushna accompanied their father to Mumbai and smeared black tar on the face of the statue of Queen Victoria and garlanded the statue with shoes. During those days, the Congress session used to begin with salutations and the praising of the British Queen. Those, aware of this practice, would really appreciate their brave act.

In the year 1896, an epidemic of ‘plague’ struck Pune. The Government appointed an ICS officer named Rand to handle the epidemic. His white soldiers started repressing people in the name of checking the houses of the people. They used to break into their houses under the pretext of checking them and would molest women. Such atrocities in Pune kindled a fire of revenge in the hearts of the Chapekar brothers and soon, they got an opportunity to take revenge on Rand.

The year 1897 was the 60th year of Queen Victoria’s regime. A program was organized even in Pune on this occasion at the ‘Raj-bhavan’ in ‘Ganesh Khind’. On 22nd June 1897, Rand and Yurts left after attending the program at night in their respective horse-carriages. The carriage in which Yurts was travelling was a little ahead. As the watchword ‘Gondya Aalaa Re Aalaa’ was called out by Vasudevrao, Balkrushna entered the coach of Yurts and emptied his revolver which was aimed at Yurts head.

Even then, the call was going on, therefore, Damodarpant understood what had happened. He was also happy that although he thought that he was deprived of the opportunity by Balkrushna, now was his chance to take action. He stopped Vasudevrao who was running after Rand who was in the 2nd and he jumped into the coach. He drew aside the curtains and emptied his revolver into Rand’s head from the back. Damodarpant got off the horse-carriage very happy for having accomplished his mission. None of the incidents was noticed by either of the coachmen.

After a few months, Damodarpant and Balkrushna were caught due to the betrayal of the Dravid brothers. They were prosecuted and Damodarpant was hanged on 18th April 1898 whereas Balkrushna on 12th May 1899. The story of Chapekar brothers does not end here. Vasudevpant, the youngest brother was enraged to learn about the betrayal of the Dravid brothers. He killed the Dravid brothers with the help of his friend Mahadev Ranade and hanged himself on 8th May 1899. Damodarpant was only 27 years old when he killed Rand, Balkrushna was 24 years and the youngest Vasudevpant was just 18. The sacrifice and bravery of these young men, only in their early twenties, makes one feel proud even today. This is the only instance of heroic sacrifice in the whole world, made by 3 brothers for the welfare of their country.