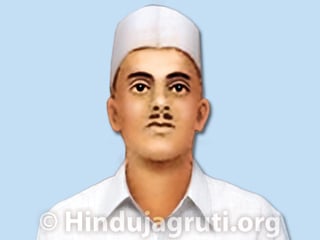 Sukhdev Thapar was a Bharatiya revolutionary from Punjab. He was an active member of the HSRA, being one of its senior most leaders. He is known to have started study circles at the National College (Lahore), in order to delve into Bharat's past as well as to scrutinise the finer aspects of world revolutionary literature. Along with Bhagat Singh and others he started Naujawan Bharat Sabha at Lahore. The main aims of this organisation were to activate the youth for freedom struggle, inculcate a rational scientific attitude, fight communalism and end the practice of untouchability.

His letter to Mahatma Gandhi written just prior to his hanging, protesting against the latter's disapproval of revolutionary tactics, throws light on the disparities between the two major schools of thought among Bharatiya freedom fighters.

We pay obeisance to this invaluable son of Bharat.