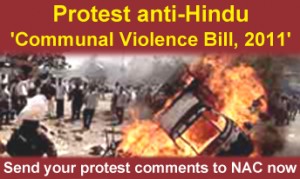 Introduction – What is this bill and why to protest ?

Apparently ‘Prevention of Communal and Targeted Violence (Access to Justice and Reparations) Bill, 2011’ is brought to curb the riots taking place between majority and minority communities. After the alleged post-godhra riots in Gujarat, the so called secularists are going pillar to post to bring this enactment. So called social activists like Teesta Settlewad, Asgar Ali ENgineer are the people involved in pushing this draft bill.

Prevention of Communal and Targeted Violence (Access to Justice and Reparations) Bill, 2011

The draconian provisions of the new Law

2. Curbing freedom of expression by terming it as Hate propaganda – Even publishing, communicating or disseminating of opposition may be termed as Hate Propaganda u/s 8 and is may extend to 3 years and/or fine. Again, it is targeted against the Hindu literature and and not anti-hindu literature.

Section 18 makes anything said or expressed against the minorities may be taken up as offence under this Act. The Govt. is to keep a constant vigil on this as to who is criticizing minorities, even fair criticizing may invite action by state else the public servant will be prosecutes – Sec. 18 – This provision may be misused widely even in the time of peace, for it is a continuing process.

4. Government machinery will be made a slave to the minorities – Under this Bill, public servants will be under constant supervision and torture- dereliction of duty and it casts vicarious liability on them(Sec. 12 to 16). As also the victim can at any point of time gets a right to know the stage of proceedings and can complain to the National authority against the Govt. Machinery.

5. Obeying orders is not a defense – Apart from the vicarious liability, the order obeying police etc. can not say that they obeyed the orders. Even if one obeys an order of his senior, he also is a accused. In the times of riots or attacks, controlling the same will be too much difficult because of this. (Sec. 16)

6. Creation of a post – Defender for Justice and Reparations. – (Sec. 56) It appears that his sole activity will be to press for the rights of minorities.

7. Creation of National Authority for Communal Harmony, Justice and Reparation

8. The public servants like District Magistrate or Police Superintendent made directly answerable to the National Authority. (Sec. 72,29, 69, 71, 4138,39)

9. Presumption of guilt and burden of proof on the accused (Hindus) – The accused will have to prove innocence ( Sec. 74) This changes the entire legal proceeding against the hindu accused people.

10. More than one third of public prosecutors will be from the religious or linguistic minority. ( Sec. 78)

11. Provision for funds – There will be funds diverted from the Consolidated Funds of India in addition to the fines collected under this act which will be disbursed to the alleged victims.

12. Apart from punishment the convict will have to pay to the victim – Whatever is given to the victims are in turn subrogated from the the persons allegedly responsible for the loss of property, life or liberty (Sec 110)