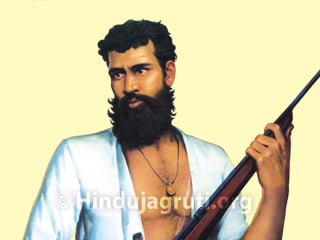 Vasudeo Balwant Phadke (Marathi: वासुदेव बळवंत फडके) was an Indian revolutionary and is widely regarded as the father of the armed struggle for India’s independence. Phadke was moved by the plight of the farmer community during British Raj. Phadke believed that ‘Swaraj’ was the only remedy for their ills. With the help of Ramoshis, Kolis, Bhils and Dhangars communities in Maharastra, Vasudev formed a revolutionary group called as Ramoshi. The group started an armed struggle to overthrow the British Raj. The group launched raids on rich English businessmen to obtain funds for their liberation struggle. Phadke came into limelight when he got control of the city of Pune for a few days when he caught the British soldiers off guard during one of his surprise attacks.

Vasudev was born on 1845-11-04 in Shirdhon village of Panvel taluka based in Raigad district in Maharashtra state in a Marathi Chitpavan Brahmin family. As a child Vasudev preferred learning skills like wrestling, riding over high school education and dropped out of school. Eventually he moved to Pune and took the job as a clerk with military accounts department in Pune for 15 years. Krantiveer Lahuji Vastad Salve a then prominent social figure based in Pune was the mentor of Vasudev. Lahuji Salve, an expert wrestler operated a gymnasium. Lahuji preached the importance of independence from British Raj. Lahuji belonged to Mang community an untouchable community, taught Vasudev the importance of getting backward castes into mainstream freedom movement. It was during this period that Vasudev began attending lectures by Govind Ranade which mainly focused on how the British Raj policies hurt the Indian economy. Vasudev was deeply hurt by how this was leading to widespread suffering in the society. In 1870, he joined a public agitation in Pune that was aimed at addressing people’s grievances. Vasudev founded an institution, the Aikya Vardhini Sabha, to educate the youth. While working as clerk, Vasudev was not able to see his dying mother due to the delay in approval of his leave. This incident enraged Vasudev and happened to be the turning point in his life.

Revolt with the help of the Ramoshi’s

In 1875, after the then Gaikwad ruler of Baroda was deposed by the British, Phadke launched protest speeches against the government. Severe famine coupled with the evident apathy of the British administration propelled him to tour the Deccan region, urging people to strive for a free republic. Unable to get support from the educated classes, he gathered a band of people from the Ramoshi caste. People from the Kolis, Bhils and Dhangars were also included later. He taught himself to shoot, ride and fence. He organised around 300 men into an insurgent group that aimed at liberating India from British rule. Vasudev intended to build an army of own but lacking funds they decided to break into government treasuries. The first raid was done in a village called Dhamari in Shirur taluka in Pune district. The income tax which was collected for British Raj was kept in the house of local business man Mr. Balchand Fojmal Sankla. They attacked the house and took the money for the benefit of famine stricken villagers. There they collected about four hundred rupees but this led to his being branded as a dacoit. To save himself Vasudev had to flee from village to village, sheltered by his sympathisers and well-wishers, mostly the lower class of the society. Impressed by his zeal and determination, the villagers of Nanagaum offered him protection and cover in the local forest. The general plot would be to cut off all the communications of British forces and then raid the treasury. The main purpose of these raids was to feed famine-affected farmer communities. Vasudev performed many such raids in areas near Shirur and Khed talukas in Pune.

Meanwhile, Vasudev continued his raids and increased his follower-base. The monetary situation of the movement improved. But then Vasudev had a realization the people around him were more interested in his loot, or wealth, than in the ideals that he wanted to fight for. Vasudev decided it was time for him to find a new place. He decided to move to south, and headed for Shri Shaila Mallikarjun shrine. After overcoming the moral defeat, Vasudev again recruited about 500 Rohilas to form strong army to start a fresh fight against the British Raj.

Vasudev’s plans to organize several simultaneously attacks against the British Raj nation wide were met with very limited success. He once had a direct engagement with the British army in the village of Ghanur, whereafter the government offered a bounty for his capture. Not to be outdone, Phadke in turned offered a bounty for the capture of the Governor of Bombay, announced a reward for the killing of each European, and issued other threats to the government. He then fled to Hyderabad State to recruit Rohilla and Arabs into his organisation. A British Major, Henry William Daniell and Abdul Haque, Police Commissioner to the Nizam of Hyderabad, pursued the fleeing Vasudev day and night. The British move to offer a bounty for his capture met with success: someone betrayed Phadke, and he was captured in a temple after a fierce fight at the district of Kaladgi on 20 July 1879 while he was on his way to Pandharpur. From here he was taken to Pune for trial. Vasudev and his comrades were housed in the district session court jail building, near Sangam bridge, which now happens to be the state C.I.D. building. His own diary provided evidence to have him sentenced for life. Vasudev was transported to jail at Aden, but escaped from the prison by taking the door off from its hinges on 13 February 1883. But his escape was too short lived: he was recaptured and put back in prison. Vasudev then went on a hunger strike to death. On 17 February 1883 Vasudev breathed his last breath as a result of his protest hunger strike.

One of the reasons for Vasudev to known as the father of the Indian armed rebellion was the fact that he was the source of inspiration for couple of fellow freedom fighters. Bankim Chandra Chatterjee’s famous patriotic novelAnand Math incorporated various contemporary acts of patriotism performed by Vasudev during his freedom struggle. As the British government didnt like this, Bankim had to print upto 5 editions of the book to tone down these stories.

What you can do to protect the Nation & Dharma?

And the most important is start the spiritual practice to attain blessings of God and Saints to have success in your mission.