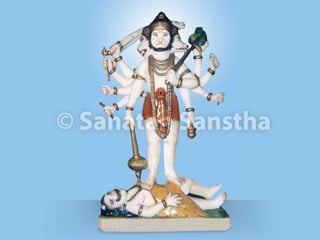 1. Forms of Hanuman : Science behind the idol

One comes across varied information about Hanuman’s true form. He is mostly red and rarely black. ‘Red’ Hanuman is one who is smeared with sindur (vermilion). Saturn’s (Shani’s) influence may have resulted in His black complexion. Hanuman is popular as an incarnation of Rudra or as the son of Rudra. The red complexioned Rudra has perhaps influenced Hanuman’s complexion too. When Hanuman became red in complexion, tales of His love for sindur gained popularity.

1. Once after bathing, Sita applied a red circular mark in the centre of Her forehead with sindur. When Hanuman asked Her the reason for it, She replied, “It prolongs the life of your Master.” This influenced Hanuman so greatly that He smeared sindur over His entire body !

Once when Hanuman was proceeding to Lanka with the Dronagiri hills Bharat struck Him with an arrow and wounded His leg. The wound healed with a mixture of sindur and oil. Hence sindur and oil are Hanuman’s favourites.’

Look at the two figures given below. Decide with which figure you feel more pleasant and then read further.

One finds quite a few idols of the five-faced Maruti. These five faces are those of the eagle (garud), boar (varah), horse (hayagriva), the lion (sinha) and the monkey (kapi).This idol has ten arms, wields a flag, a human head, a sword and other weapons. A five faced Deity implies that it maintains vigilance and controls the five directions – North, South, East, West and the upward direction. Hanuman facing the south : Here, ‘south’ means the south direction and the right side.

The face of the idol is towards the south, hence it is known as dakshinamukhi (dakshin = south, mukhi = face). One finds such Hanuman idols in the cities of Mumbai, Pune, Aurangabad, etc. in the state of Maharashtra and Basavgudi in Karnataka. Hanuman facing the right side is aggressive (emits energy), akin to Ganapati with His trunk pointing towards the right. Both these are worshipped in order to overcome the adverse effects of distressing energies. The sushumna nadi is always active in Deity Ganapati and Hanuman; but once Their form is changed, there are slight variations and accordingly either the surya or chandra nadi gets activated to some extent.

Although there is a firm belief among people about the relationship between Shani and Hanuman, its explanation is equally mysterious and beyond comprehension.

1. In the Hanumantsahasranam stotra, Shani is mentioned as one of the thousand names of Hanumant.

2. The Suryasanhita mentions that Hanuman was born on a Saturday (Shanivar).

3. Rudra is one of Shani’s ten names.

4. Like Shani, Hanuman too is occasionally depicted as dark complexioned.

5. In Garhval where Shani is popular, Hanuman too is depicted as wielding an iron whip. Hence, unknowingly a similarity must have been established between Shani and Hanuman. Thus leading to worship of Hanuman on Saturday and the incorporation of this worship in the vowed observance on Saturday.

2. There is discord between Shani and the Sun, whereas Hanuman is a devotee of the Sun. Hanuman has acquired all His knowledge from the Sun. The Sun has also imparted a hundredth fraction of its radiance to Hanuman. Due to discord between Shani and the Sun, the Sun helped Hanuman, who is considered to be Shani’s enemy. At that time, the air element and energy had not manifested completely in Hanuman.

3. Shani is slow, whereas Hanuman is swift like the eagle.

4. Shani is considered to be an evil planet. Hanuman is certainly not evil.

5. There is a custom of not selling oil on Saturdays, whereas there is a tradition of offering oil to Hanuman on Saturdays.

The Yakshas are described as brave and invisible. In the Valmiki Ramayan, Hanumant is addressed as the ‘invisible one’. Mahavir (The great valiant) is one of the well known names of Hanuman. It indicates the relationship between Hanuman and the worship of Yaksha. Hanumant finds a mention in the list of the fifty-two valiants, as Kapilumbir. At many places in Maharashtra, in the Hindu lunar month of Phalgun, processions of ‘valiants’ are on their way to worship Virmaruti.

Both are red in colour. Both possess ashtamahasiddhi (The eight great supernatural powers).

5. Importance of Maruti as described by saints

Samarth Ramdas Swami has said, ‘Hanumant is our Deity’. Hanuman represents energy, skill and devotion. Hence, Saint Ramdas initiated the worship of Hanuman. The eleven Hanuman idols installed by Him are well known. In North India too, Saint Tulsidas established temples and gave importance to worship of Hanuman. Madhavacharya (founder of the Brahma sect, propounding duality) is considered to be an incarnation of Hanuman. Several other saints have also glorified Hanuman through Their compositions to set an example for society.