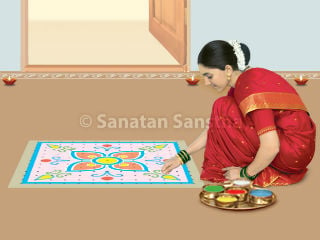 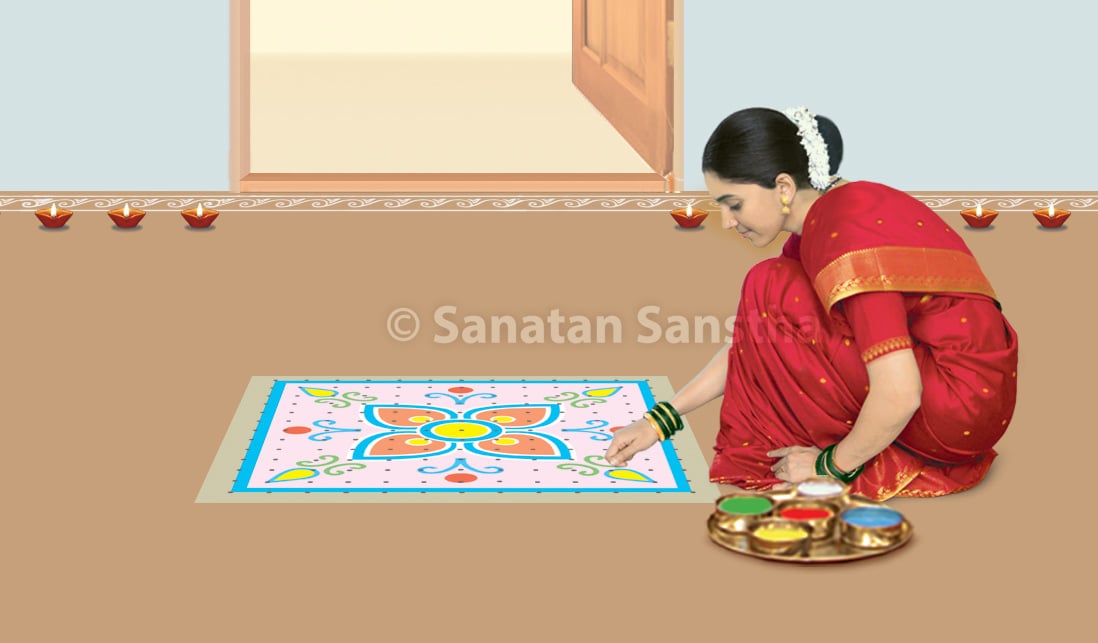 The basic Sanskrut word is rangavalli. A design created by allowing the powder of a special soft white stone to flow freely, with a pinch of the hand is called Rangoli. Rangoli is an art which precedes sculpture and painting. It is both an auspicious and a preliminary necessity in any religious ritual. It is a practice to draw Rangoli at the site of any auspicious religious ritual such as a holy festival, a religious festival, an auspicious function, ritualistic worship, a vowed religious observance, etc. When performing the act of moving lit lamps about the face for someone (arti) too, Rangoli is drawn around the wooden seat (pat) on which he is seated and also in front of him. At public functions also during a meal Rangoli is drawn around a wooden seat and the plate or leaf on which the meal is served. During Diwali various Rangoli designs are drawn at the doorstep and decorated with different colours. In the ancient times it was a practice to sweep and sprinkle every doorstep with cowdung everyday and draw Rangoli. Ground smeared with cowdung but not decorated with Rangoli is said to be inauspicious.

2. What is Rangoli made of?

Rangoli is a coarse powder obtained by pounding a cleavable and lustrous mineral (shirgola). In the Konkan region (near Maharashtra and Goa states in India) the husks of rice are burnt and the white ash obtained is used as Rangoli.

3. How is Rangoli executed?

a. The surface on which the Rangoli is to be drawn is prepared by cleaning it thoroughly. Traditionally, the surface was smeared with cow dung, and after it dried, Rangoli was drawn on it at specific locations. In the ancient times it was a practice to daily sweep and sprinkle every doorstep with cow dung and draw Rangoli.

b. A design or auspicious symbols or signs are selected for drawing.

c. After the selection, the required numbers of points are created on the floor using the Rangoli.

d. Then these points are joined with the appropriate design shapes, lines, curves, etc.

Lastly, colours are filled in the Rangoli as per the design recommendations.

4. Where is the Rangoli drawn?

a. When performing the act of moving lit lamps about the face for someone (Arati) too, Rangoli is drawn around the wooden seat (pat) on which he is seated and also in front of him.

b. At public functions also during a meal Rangoli is drawn around a wooden seat and the plate or leaf on which the meal is served.

c. During Diwali various Rangoli designs are drawn at the doorstep and decorated with different colours.

d. After smearing the ground with cow dung one should not forget to draw at least four lines of Rangoli on it. Ground smeared with cow dung but not decorated with Rangoli is said to be inauspicious.

5. Why Rangoli is drawn?

When sweeping the floor or smearing with cow dung, subtle lines are created on it. These possess certain frequencies. As these lines are irregular, their vibrations too are irregular. These are harmful to the body, eyes and mind as well. To overcome these unfavourable frequencies if cones and auspicious symbols are drawn systematically with Rangoli on the swept or smeared floor; the ill-effects of sweeping and smearing are overcome and favourable results are obtained.

6. What are the various types of Rangoli?

6A. Rangoli is of two main types

6A1. Form dominant: In this type of Rangoli, lines, cones and circles are drawn proportionately.

6A2. Ornamental: In this type of Rangoli, importance is given to flowers, leaves, trees, creepers, animals and birds. This Rangoli is more appealing than the form dominant one.

6C. Two parallel lines of Rangoli are drawn. In the middle of the lines two curved lines are drawn so as to create a chain. This chain represents a serpent couple.

6D. The eight petals represent the universe with eight directions, as well as the sun and Shri Vishnu. The lotus is symbolic of Shri Lakshmi as well as the energy for procreation, so it is given special importance in the worship of Shri Vishnu.

6E. Besides Rangolis with a one-sided auspicious emblem (ekalingatobhadra), eight-sided propitious emblems (ashtalingatobhadra) and those which are auspicious on all sides (sarvatobhadra) are also drawn pertaining to religious acts. In this type, a big square is divided into small squares. The small squares are then filled with vermilion (kumkum) in a specific manner so as to create the form of Deity Shiva’s linga. These rangolis are seen in the Shaiva sect.

6F. Another type of Rangoli is drawn with the help of dots. First the dots are made on the ground and then vertical and transverse lines are drawn joining these dots so as to create various figures such as a peacock, a tortoise, a lotus, a creeper, etc. Though this Rangoli with dots is complicated, it is attractive.

In Hindu Dharma, Rangoli is drawn during every festival, auspicious occasion, religious rituals, etc. All the festivals, auspicious occasions, rituals, etc. are associated with one of Deity principles. During these days, the Divine principle of a specific Deity is present in the atmosphere in a larger proportion on the day of the respective festival or is attracted to the venue where religious rituals of that Deity are being performed. In order to attract maximum Deity principle, rangolis that attract and transmit respective Deity principle are drawn so that everyone derives spiritual benefits from it.

According to a Principle in Spirituality that ‘word, touch, taste, form, smell and their energy co-exist,’ even if a small variation is made in the form and colour of the Rangoli, its vibrations change. The booklet ‘Sattvik Rangolis’ illustrates various sattvik designs of rangolis which attract and transmit various Deity Principles such as – Shri Ganesh, Shri Rama, Shrikrushna, et. al.

The main feature of sattvik Rangoli is that due to transmittance of Deity Principle, the devotees get various anubhutis (spiritual experiences) of Shakti (Divine Energy), Bhav (spiritual emotion), Chaitanya (Divine Consciousness), Anand (Bliss) and Shanti (Serenity).

A maximum of 10% of the Deity’s Principle can be attracted by these rangolis. Rangolis available elsewhere contain -1 to +1% (negative or positive) Principle.

An auspicious mark, which represents the Principle of Divine Energy in the form of Shrī Lakshmī.

An ancient Bharatiya language of Divine discourse. This is also considered to be the language of the Gods