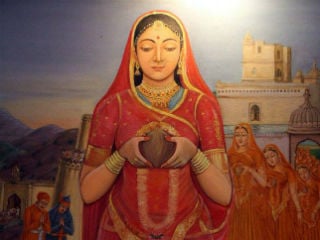 Jai Har Har, the rousing war cry which instilled fear in the enemy’s heart, invoked the protection of God on the nation and religion from calamities. Jai Har Har became Jauhar, a means for women and children from Rajput clans to escape being captures, raped and enslaved. Jauhar, self immolation of their families, became the spur that goaded the Rajput warriors to cast aside the family bonds and fight for Dharma and the motherland. 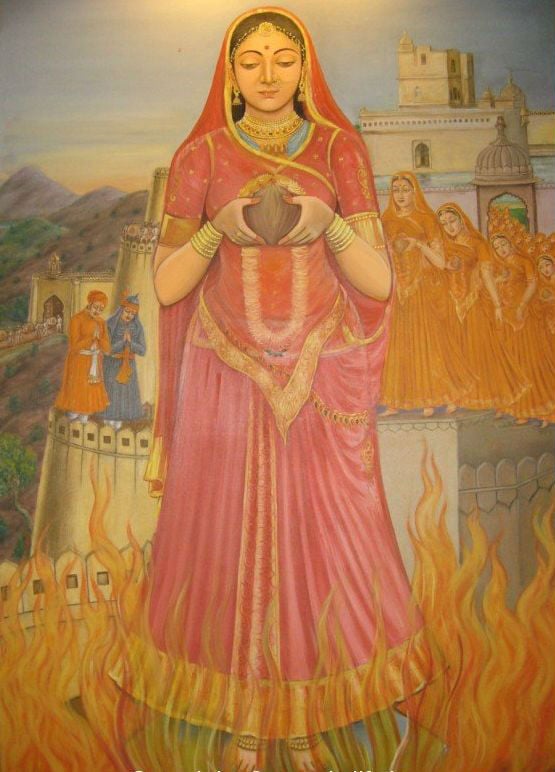 After hearing the beauty of Padmini, Queen of Rana Bhimsingh of Chittor, Allauddin Khilji whose lust knew no bounds, invaded Chittor. When Bhimsingh’s army started losing against Chilli’s army, the womenfolk of Chittor decided on self immolation. Queen Padmini along with the wives, daughters and sisters of the warriors of Chittor jumped into a fire pit and sacrificed their lives. This was the first big Jauhar, following which Bhimsingh’s army fought valiantly with the invaders but was defeated.

Sultan Bahadur of Gujarat invaded Chittor with huge army. At that time Vikramjitsingh, son of Rana Sanga, adorned the throne of Mewar. Though all the Rajput kings came to help of Vikramjitsingh, they were unsuccessful. Lastly Javahirbai (Karnavati, Vikramjitsingh’s mother) entered the battlefield where she was martyred. This extinguished any hope for victory. To preserve their honour, in case the marauding invaders captured them, Rajput women lit a fire in which 13000 women sacrificed themselves in Jauhar.

When Akbar was ruling Delhi, King Udai Singh was the King of Chittor. Akbar invaded Chittor with a huge army. When Rajputs felt that their army and strength would fall short, 8,000 Rajput warriors donning saffron attacked Akbar’s army and fought fiercely. All the Rajputs died on the battlefield. Akbar’s siege of Chittor saw the massacre of 30000 people. Apart from this he was responsible for the death of 1700 women and girls. No one was alive. Akbar looted sacred threads and jewellery from the slain Rajputs, all of which weighed 74 1/2 maunds (2980 Kg.). Whole of Rajasthan grieved. From that date till today Rajput people and jewellers write the figure 74 1/2 on all their papers, hundies. People of Chittor regard this as an inauspicious number. It remembered to keep the memory of those who sacrificed themselves alive.

During this war Akbar has noted down the words he heard from Rajput women. Akbar notes that every mother of Chittor would exhort her children to fight on. Akbar also notes that the mothers would tell their children that it was acceptable if the entire clan ceased to exist while fighting to protect Chittor, but fight they must.

These three Jauhars are noted in the history and as such innumerable mothers, sisters, daughters and wives of warriors have sacrificed their lives for protection of Dharma and the motherland.

Respectful obeisance to these warriors who kept the flag of honour flying !