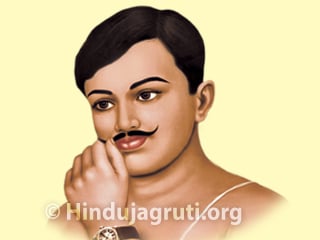 Chandrashekhar Azad : One of the greatest freedom fighters 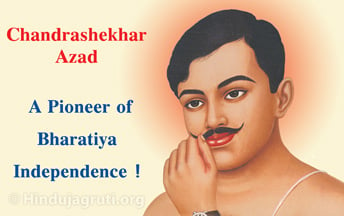 Chandrashekhar Azad was a great Indian freedom fighter. His fierce patriotism and courage inspired others of his generation to enter freedom struggle. He was the mentor of Bhagat Singh, another great freedom fighter, and along with Bhagat Singh he is considered as one of the greatest revolutionaries that India has produced.

Chandrashekhar Azad was a Bharatiya revolutionary from Allahabad, Uttar Pradesh. He believed that his Dharma was to fight for the Nation. He said a soldier never relinquishes his weapon. He was involved in the Kakori Train Robbery (1926), in the attempt to blow up the Viceroy’s train (1926), and in the shooting of Saunders at Lahore (1928) to avenge the killing of Lala Lajpat Rai. He formed the ‘Hindustan Socialist Republican Association’.  He was an ideal for revolutionaries such as Bhagat Singh, Sukhdev, Batukeshwar Dutt and Rajguru.

Chandrashekhar Azad was deeply troubled by the Jallianwala Bagh Massacre in Amritsar in 1919. In 1921, when Mahatma Gandhi launched Non-Cooperation movement, he actively participated in revolutionary activities. He received his first punishment at the age of fifteen. He was caught while indulging in revolutionary activities. When the magistrate asked him his name, he said “Azad” (meaning free). He was sentenced to fifteen lashes. With each stroke of the whip the young Chandrasekhar shouted “Bharat Mata ki Jai !”. From then on Chandrashekhar assumed the title of Azad and came to known as Chandrashekhar Azad. He vowed that he would never be arrested by the British police and would die as free man.

Chandrashekhar Azad as a revolutionary

Chandrashekhar Azad was then attracted towards more aggressive and revolutionary ideals. He committed himself to complete independence by any means. Azad and his compatriots would target British officials known for their oppressive actions against ordinary people and freedom fighters.

Azad was a terror for British police. He was on their hit list and the British police badly wanted to capture him dead or alive. On February 27, 1931 Azad met two of his comrades at the Alfred Park Allahabad. He was betrayed by an informer who had informed the British police. The police surrounded the park and ordered Azad to surrender. Azad fought alone valiantly and killed three policemen. But finding himself surrounded and seeing no route for escape, he shot himself. Thus he kept his pledge of not being caught alive.

Azad lived only for 25 years, but inspired thousands of Indians to take part in freedom struggle.