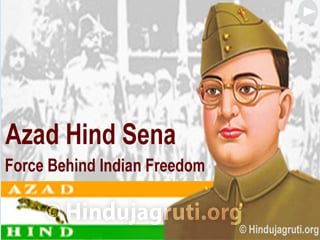 Netaji Subhashchandra Bose, founder of Azad Hind Sena, was a radical thinker. Destiny had bestowed upon him the task of teaching a lesson to British in the final struggle for freedom of India. This pious work of Netaji was accomplished by the boundless courage and unmatched sacrifice of body, mind and wealth by the Hindstani soldiers of ‘Azad Hind Sena’. Here is a short introduction of this organization!

Organization of Hindustani soldiers in British army by Netaji !

After escaping from the house arrest Subhashbabu resided in Germany till Feb 1943. He visited Hitler, the German dictator, many times and appealed for his help to free India. Hitler, on a winning spree in the Second World War offered cooperation to Subhashchandra Bose. He enlightened the Hindustani soldiers in British army who had surrendered to Germany. The Hindustani soldiers used to be impressed with the lectures of Subhashchandra Bose and would pledge for freedom.

Founding of Azad Hind Sena and slogan of ‘Dilli Chalo’ !

Germany’s friendly nation Japan’s army was defeating British armies in East Asian countries. They also had Hindustani soldiers in the British forces that surrendered. Rashbehari Bose already residing there started organizing these Hindustani soldiers as per guidance of Netaji Subhashchandra Bose. To meet these soldiers Netaji Subhashchandra Bose traveled for 90 days in a German submarine, braved all odds and reached the Japanese capital city of Tokyo in July 1943. Rashbehari Bose handed over the leadership of this army to Netaji and on 5th July 1943 Netaji Subhashchandra Bose founded Azad Hind Sena at Singapore. While addressing thousands of soldiers in his historic address he said,”Friends, soldiers let your war cry be only one! ‘Dilli Chalo!’ (On to Delhi) I do not know how many of us would personally survive; but I know, victory is ours. So stand up and take your arms. In India the revolutionaries have already prepared a path for you and this will lead us to Delhi…. Dilli Chalo!”

On forming an army of thousands of Hindustani soldiers and after getting the support of lakhs of Hindustani people in East Asia for the freedom of India, Netaji established another interim Government of free India on 21st Oct 1943. This Government was recognized by Japan, Germany, China, Italy, Burma. Azad Hind Sena was army of this Government.

Azad Hind Sena was army of soldiers from all castes, various states and different languages. Sena was integrated unit. With the inspiring song ‘Kadam Kadam Badhaye Ja’ on their lips, Netaji and his army started a winning campaign to realize the dream of free India.

Establishment of  ‘Rani of Jhansi’ regiment !

Netaji established ‘Rani of Jhanshi Regiment” on the lines of Rani Jhansi’s army. He took a strong stand that women should also participate in military training along with men. Netaji used to say, ‘Rani of Jhansi who had fought battles in the freedom struggle of 1857 should be the role model for women to contribute to the pious work of freeing India by participating in freedom struggle’.

As soon as Azad Hind Sena revolted against British empire, Japan’s head of state General Tojo handed over two islands Andaman and Nicobar won from England to Azad Hind Sena. On 29th December 1943 Netaji Subhashchandra Bose visited Andaman as Head of the state of free India, hoisted a flag and paid homage to revolutionaries who had undergone punishment in the cellular jail.

Netaji moved his military to Burma in January 1944. It was on 19th March 1944 that history was created when Azad Hind Sena entered land of India. This army vanquished the British forces in places like Imphal, Kohima. On this victorious occasion in his address Netaji roared, ‘Our mother land is looking for freedom! Today, I demand of you one thing, above all. I demand of you blood. Give me blood and I promise you freedom’! This speech was immortalized in history. His soulful words thrilled the young Hindustani boys present there and they wrote their pledge in blood.

From March 1945 Japan started suffering a setback. On 7th May 1945 Germany surrendered unconditionally and on 15th August Japan officially surrendered to the Allied forces. Because of unexpected defeat of Japan-Germany Subhashchandra lost all hopes. While traveling to Siam on 18th August it is widely believed that this bright flame of Indian Resistance extinguished.

Azad Hind Sena could not reach Delhi, but the challenge it created against the mighty British Empire has no parallel in history. This rocked the very base of Britsh rule. British realized that it would be difficult to rule India in future due to revolt of Hindustani soldiers. The shrewd and cunning British Government recognized this danger and instead of undergoing a humiliating exit, they decided to leave this country. This was confessed by the then Prime Minister of Britain.

British apprehension and change in stance by Nehru !

Spontaneous support was given by Indians to the Azad Hind Sena which was founded by Netaji for which he sacrificed everything. This was realized during the trial of army officers of Azad Hind Sena for waging a war against king of England in the red fort at Delhi. When Netaji announced military attack against British rule, Nehru had taken a position against it. However, after the Netaji went missing and the trial started against the officers of Azad Hind Sena in Delhi, the public opinion in the entire country was in favor of them. On seeing the popularity of Azad Hind Sena finally Nehru changed his position and he himself became a defense lawyer of the officers of the Azad Hind Sena. In the court marshal all three officers were found guilty. Even then they were pardoned because British rulers had realized that if the colleagues of Netaji were sentenced there will be outcry never seen before in the 90 years rule in the country. The selfless service of the nation by the soldiers of Azad Hind Sena had created the ambition of freedom in the mind of millions of countrymen.

The pitiable state of the descendents of
Azad Hind Sena’s soldiers due to negligence by Congress !

Thousands of brave men and women rose to Netaji Subhashchandra Bose’s call to take up arms against the British and joined the Azad Hind Sena. They gave up everything they had, all their comforts, their families so that they could fight against the British forces and get India her freedom. But the very same soldiers and their descendents live in pitiable penury, as refugees in Myanmar (formerly Burma). Close to 4 lakh people of Indian origin have been denied citizenship there. Neither are they allowed to obtain jobs, nor buy or sell land! They cannot even travel freely within Myanmar! They always have to carry a ‘registered foreigner permit’ on them and even shell out money to have it renewed each year. These people sacrificed everything to ensure that we live in a free India, does the Government of India have no obligation to them?

(Post independence, instead of honoring Netaji Subhashchandra Bose and his Azad Hind Sena, the Gandhi-Nehruvian Congress completely scorned them ! This negligent behavior has resulted in the descendents of these brave soldiers having to live as destitutes ! People, you have the right to question the Congress! Ask them why they exhibit so much hatred towards the freedom fighters ! – Editor, Dainik Sanatan Prabhat)