Land Jihad being carried out by Waqf Board by usurping lakhs of acres of land, much more dangerous than Love Jihad; Hindus need to fight this ! – H. H. (Adv.) Hari Shankar Jain, Supreme Court 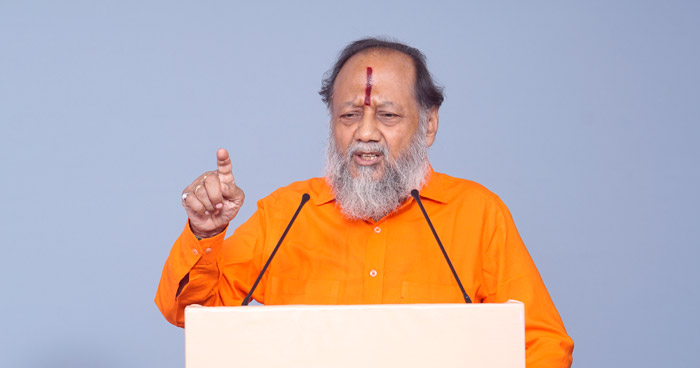 In 2013, the then Congress government made amendments in the Waqf Board law thereby giving Muslims infinite rights. This amendment gave the Waqf Board the power to declare any piece of land as theirs, not limited to the land belonging to temples and trusts. As such, currently, the Waqf Board owns a whopping 6 lakh acres of land – the largest, only after India’s Defence Forces and Indian Railways. In reality, the Waqf Board was never in possession of such obscene amount of land; however, owing to the lack of knowledge and indifferent nature of Hindus pertaining to this law, the Waqf Board is literally running amok usurping lakhs of acres of land across the country. The Land Jihad being perpetrated by the Board is far more dangerous than Love Jihad. Hindus should unite and fight this battle legally – H. H. (Adv.) Hari Shankar Jain of Supreme Court and President of ‘Hindu Front For Justice’, has appealed. He was speaking at the Ninth All-India Hindu Rashtra Convention organised by Hindu Janajagruti Samiti, held online.

1. Wakf Board has taken over private properties of Hindus, properties of temple trusts and even government lands; therefore, there is disintegration of Hindus’ assets. Presently, Wakf Board is holding maximum land after Indian Railways.

2. In the year 1923, Wakf Board had common rights; but after Congress took over, maximum special rights were conferred on Wakf Board in 1954, 1995 and 2013. As a result, Wakf Board took possession of whichever land it wanted; however, Hindus are still inactive and indifferent.

3. Hindu advocates should study laws related to the Wakf Board. Research needs to be conducted on lands taken over by Wakf Board. The land-owners, who have not been given information about their lands, can give legal fight.

4. Hindus should become alert when they see a board displayed by Wakf Board on any land. Wakf Board has grabbed Hindus’ lands, on large scale, in Bengal, Maharashtra, Tamil Nadu and Kerala. We can get back these lands in a lawful manner.

5. We can even go to Supreme Court to get justice so that Wakf Board’s game of looting Hindus’ properties could be stopped. Hindus can be given this information by holding work-shops.

The Convention was viewed LIVE by an audience of over 42 thousand whereas the subject reached over 1.60 millions via Samiti’s official YouTube channel and Facebook page.

Law on protection of animals that was passed in 1960, is of no use in present time. While it is an offence to treat animals cruelly as per clause 28 of this Act; it is not an offence to treat them inhumanly for religious purposes. Every district should have a committee dealing with matter related to causing harm to animals as per this Act but it is not implemented. An offender also gets nominal punishment under this Act; therefore, nobody is scared of this Act. A person is punished for adulteration of milk while a person killing an animal that gives milk, gets away with negligible punishment. Is it justice? It is necessary to re-enact the old law related to killing of animals with provision of stringent punishment.

As per the statistics of 2010, 50-60 lakhs of cows/cattle are sent to Bengal from Rajasthan and Madhya Pradesh and from there to Bangladesh. All the money earned out of it, is used for terrorist, jihadi activities, informed advocate Ichalkaranjikar.

Old laws passed during British regime are still in use in India. There are more than 3.5 crore cases pending in Courts. Media is spreading Hindu-hatred. Everyone has to face corrupt system in daily life. All 4 pillars of democracy have turned out to be failures today; therefore, Hindu Janajagruti Samiti (HJS) has staged a movement called ‘Surajya Abhiyan’ for bringing change in such corrupt systems. People can join various drives undertaken under this movement like drive against corruption in municipal corporations, drive to raise voice against adulteration of petrol and food items, drive to force hospitals for managing their waste and lodging complaint with Pollution Control Board in that context; exposing scam in purchase of masks; obtaining information on corruption in utilization of funds given to government hospitals; exposing malpractices in giving tender to other organizations in the name of digitalization in District Collectors’ offices etc.

There were 7 lakh ‘Gurukuls’ in India before the British came here and there was provision for people of every caste to get education. People were literate. Even then, there were only 13% literate people in India in 1947. People gave up education due to economic exploitation by the British as they had to work to make both ends meet. Destruction of Indian education was started by Lord Macaulay. In the report sent by him to England in 1920, he had advised to get rid of India’s traditional education system. After independence, it was expected that India’s traditional education system would be reinstated; instead, who hatched the conspiracy of continuing British education system? Pundit Nehru was responsible for destroying our traditional education system, culture and customs. Nehru promoted communist ideology in education field. These leftists included history of Marxism and history of the Mugals and British regimes; instead of including India’s glorifying history and struggle for freedom. True face of Marxism exposed through gory massacres carried out by Lenin, Stalin etc were hidden and a moderate form of communism was presented through history. After Nehru, Indira Gandhi went a step further by handing over charge of media and universities to leftists. Indira Gandhi gave shelter to communists to remain in power.  The young generation, educated under communists’ education system and working in various fields like government administration, judiciary or as rulers, looks down upon Indian traditions. Congress and Nehru are considered to be followers of Gandhi’s philosophy but Gandhi never approved of communist ideology. Gandhi had promoted ‘Rama-rajya’. Nehru, however, assassinated Gandhi’s ideology and promoted Marxist ideology in India. Education system devised by leftists was brought in force by keeping Indian people in the dark. It was murder of democracy and Congress and communists are responsible for the same. A gang of communist historians destroyed Indian culture and traditions. Recently, new education system has been brought into force. It is necessary to wipe out communist ideology from the education system and include education that will lead to upliftment of Bharat.