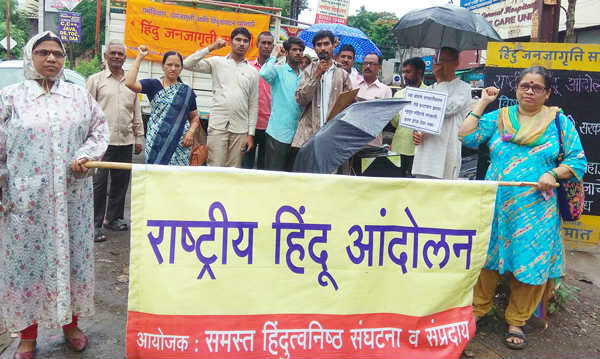 Akola : Rashtriya Hindu Andolan was held at Ratnam Lawns Jatharpeth Chowk in which demands like, cancelling the decision taken by the Government with regard to taking charge of the Shanaishchar Devasthan, so also cancelling the decision of renaming the Haj House in Karnataka as Tipu Sultan who was very vicious, were made. Residents’ response with respect to signing the representation was very commendable. Adv. Prashant Gore, Adv. Shruti Bhat, Smt. Vaishali Gavande, Shri. Dheeraj Raut, Shri. Shyamsundar Rajandekar, Sou. Vandana Buche of HJS and other pro-Hindus were present in this andolan.