Government spends millions of rupees on preservation of churches which remind oppression by the Portuguese; but a symbol which quietly tells excessive atrocities by Portuguese against Hindus i.e. the ‘Hatkataro Khaamb’ seems to be deliberately neglected ! – Editor, Dainik Sanatan Prabhat 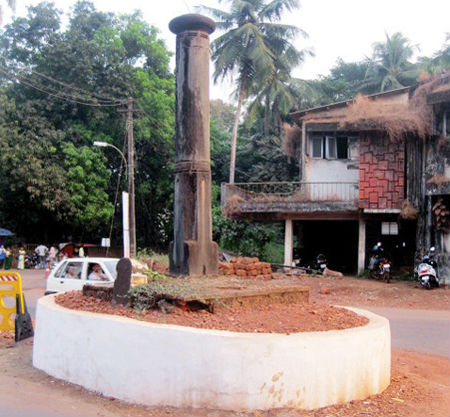 Panaji : The historical ‘Hatkataro Khaamb’ in old Goa has not yet been declared as an ancient monument; therefore, Archaeology Department has totally neglected it. Hindu Janajagruti Samiti and all pro-Hindu organizations had made a demand on number of occasions for declaration of ‘Hatkataro Khaamb’ as an ancient historical monument; but the Government has conveniently ignored this demand.

As per the information collected on this, since ‘Hatkataro Khaamb’ has not been declared as an ancient monument, neither Indian Archaeology Department nor Directorate of Archives and Archaeology nor Goa Government can officially claim right on the monument. There are hundreds of such historical structures in Goa but very few of them have been included as ancient monuments in the list under Indian Archaeology Survey and Archives and Directorate of Archaeology. When Goa was freed, two lists were made of ancient monuments. In the first list were included 21 ancient monuments which had national importance and in the other list, 51 ancient monuments were included which had significance at State-level; but in both the lists, ‘Hatkataro Khaamb’ has not been included although it is the only symbol of Inquisition imposed by the Portuguese over Hindus. According to few experts, ‘Hatkataro Khaamb’ is not included in the information available with the Government on Inquisition. This pillar was earlier towards Gandhi Circle in old Goa and later, it was shifted to old Goa- Bagal Road. Few say that in olden days, criminals used to be brought to ‘Hatkataro Khaamb’ where their hands used to be cut off by way of punishment. Some people from old Goa say that ‘Hatkataro Khaamb’ is an ancient legacy and should be preserved. Citizens from old Goa say that it should not be shifted anywhere and traffic island can be built here for its maintenance.

According to historian Prajal Sakhardande, ‘Hatkataro Khaamb’ has historical importance, so, it should be looked after by Indian Archaeology Survey or Archives and Directorate of Archaeology.