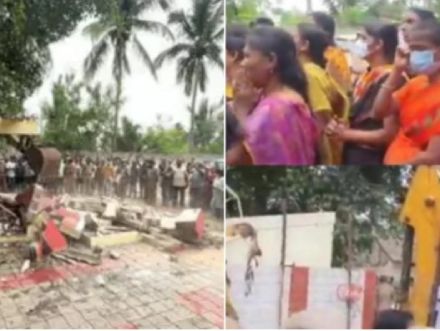 On Thursday, the Coimbatore Corporation stopped the demolition of a temple located on the Veeriyampalayam Road near Ramalakshmi Nagar in the city after the Hindu organizations and devotees led a strong protest against the corporation officials. The protesters raised slogans and chanted ‘Om Namah Shivay’ as the Corporation attempted to execute the demolition.

According to the reports, the High Court in June had ordered the demolition of the temple citing the reason that it was encroaching upon 50 feet wide road. The Court was hearing the petition filed by an individual who owns a commercial complex. The city corporation on August 5 reached the spot to execute the Court orders, however, the officials were forced to leave without completing the task.

As the Corporation attempted to demolish the temple, a large number of devotees, members of Hindu organizations like VHP and Hindu Munnani, and also BJP members gathered around the temple to protest against the demolition move. The officials razed down the compound wall and the toilet with the help of a bulldozer. The devotees then raised slogans against the officials and the police who were deployed on the spot to maintain the law and order situation.

It is alleged that the commercial complex owner who filed the petition in June, used his political contacts in the DMK government led by M K Stalin to push for the demolition of the temple. He felt that the temple was a hindrance to the parking of the vehicles of the customers visiting the complex.

The 200-year-old temple, spread over an area of 4,000 square feet is situated in Coimbatore Corporation’s 7th ward -Goldevins, Duraiswamy Nager, Ramalakshmi Nagar region. The idol which is worshiped inside the temple is said to have formed by itself (swayambhu). Reports mention that people from the surrounding region have been visiting the temple regularly to worship.

K Jayalakshmi, assistant town planning officer, confirmed that the demolition drive was stopped as devotees with tears in their eyes squatted on the temple premises. “It was raining as well”, she added. The aggrieved parties reportedly have approached the High Court now. Reports mention that the officials have decided to wait for the Court’s decision before proceeding with the demolition drive.

Elaborating on the incident, BJP district functionary Senthil Kumar said that the idol of the temple was self-manifested with at least 100 years of history behind it. “Demolishing such an old temple would affect the religious sentiments of thousands of devotees. Members of the temple committee have urged the officials to leave the temple in its present condition. The locals said they are surprised to see the haste shown by the officials to pull down a Hindu temple”, he said.

Kumar also added that the government had not honored the court orders in reclaiming a vast tract of land from Queensland near Chennai. “There are several churches and mosques on the government land or on the water bodies or blocking the waterways. The present DMK govt is keen on demolishing only Hindu temples”, he stated adding that the government has so far razed down nearly 200 temples located in several parts of the state.

One of the residents who protested against the drive stated to the Organiser that the Corporation had served no notice before furthering the demolition drive. “As per agamas, the main idols have to be kept in water and balaalayam has to be done. Without doing such rituals, the demolition was furthered. This move angered the devotees. The officials gave us time till Monday to get stay orders to stop the demotion drive”, she was quoted.