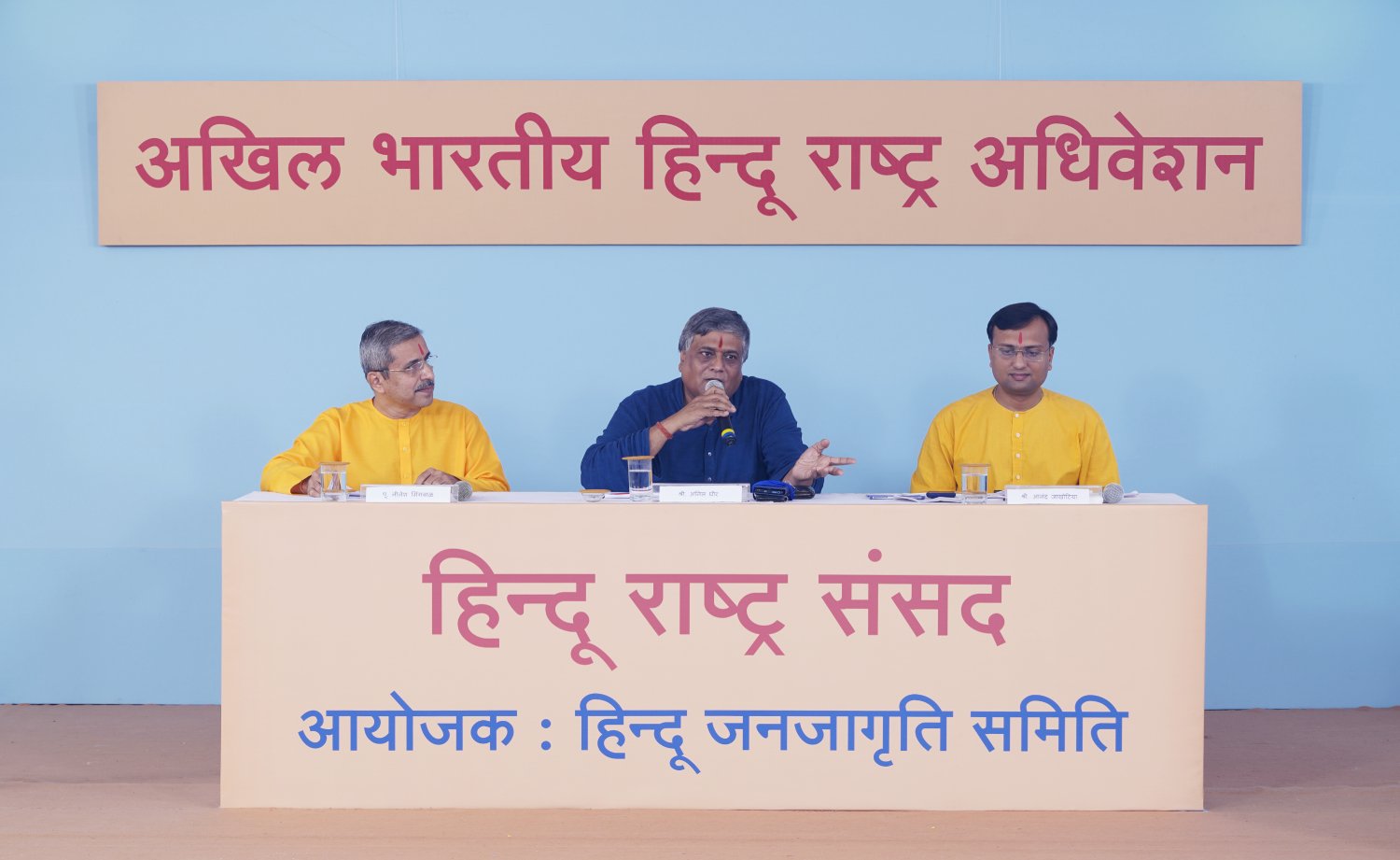 Ramnathi, 14 June (News.) – In ancient times, the kings and maharajas who built magnificent temples like Angkor Wat, Hampi, etc., had also made good arrangements to administer them. These temples would run Goshalas, Ananchhatras, Dharamshalas, Shikshan Kendras and thus provide an invaluable contribution to society. Due to this, Hindu society felt an affinity with the temples. But now the temples have become so commercialized that they have become commercial complexes (shopping malls) and pilgrimage sites are being turned into tourist destinations in the name of development. It is necessary to put an end to this. Therefore, the trustees of the temples, as well as the priests, should strive for an ideal administration of the temples. In order to achieve this, a course on ‘The ideal management of temples’ should be started. Devout Hindu advocates, activists, temple trustees and devotees shared their insights on the subject of ‘Ideal Administration of Temples’. These views were shared during the first Hindu Rashtra Sansad that convened on 13th June, the second day of the 10th Akhil Bharatiya Hindu Rashtra Adhiveshan. Anil Dheer, National General Secretary of Bharat Raksha Manch (Bhubaneswar, Odisha) was the chair, while HJS Dharmapracharak Saint H.H. Nilesh Singbal and Madhya Pradesh and Rajasthan State Coordinator of Hindu Janajagruti Samiti Shri. Anand Jakhotia oversaw the proceedings. 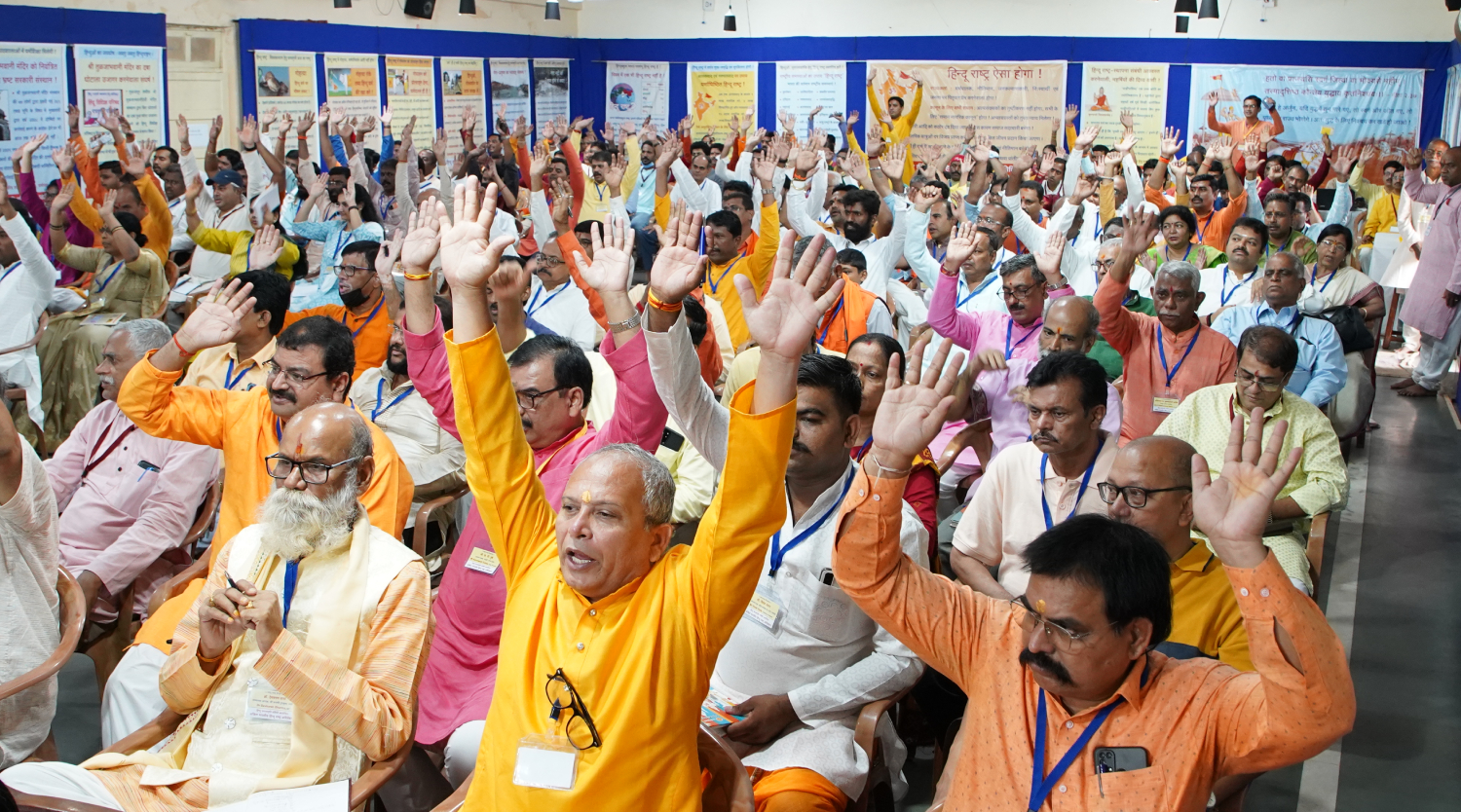 What is the ‘Hindu Rashtra Sansad’ ?

The Parliament of People’s Representatives exists to discuss various issues on national and public interests. Similarly, this is the Hindu Rashtra Sansad of the representatives of Dharma to discuss issues pertaining to Dharma. The resolutions passed in this Parliament will be sent to the parliamentarians. Based on that, this issue can be discussed in Parliament. In other words, the Hindu Rashtra Sansad is only symbolic. The proposals proposed by this Sansad may be discussed in the Indian Parliament in the future. Read More Although Hindu society is Hindu by body, their intellect has become anglicised. Temples are the centers of our faith and inspiration; However, more than 5 lakh temples were demolished to attack these beliefs. In fact, now there is a need to create a system to protect the temples. Hindu Janajagruti Samiti is engaged in doing this. There are many temples in our country. These temples inspire good thoughts. Chaitanya (Divine consciousness) spreads in the area around temples. Everyday worship of the Deities in the temples awakens the divinity within the worshipper too. For this, Dharmashastra should be taught to the Hindu devotees who come to the temples. Children and youth in particular need to be connected to temples. Temples are needed to instill morality among the people.

Merely chanting Raamnaam is not sufficient, one’s devotion achieves completion if one contributes to Ramakarya. Devotion is not successful without contribution. Hindu Rashtra will be established in the year 2025, as stated by the Saints; but we all have to contribute to that.” 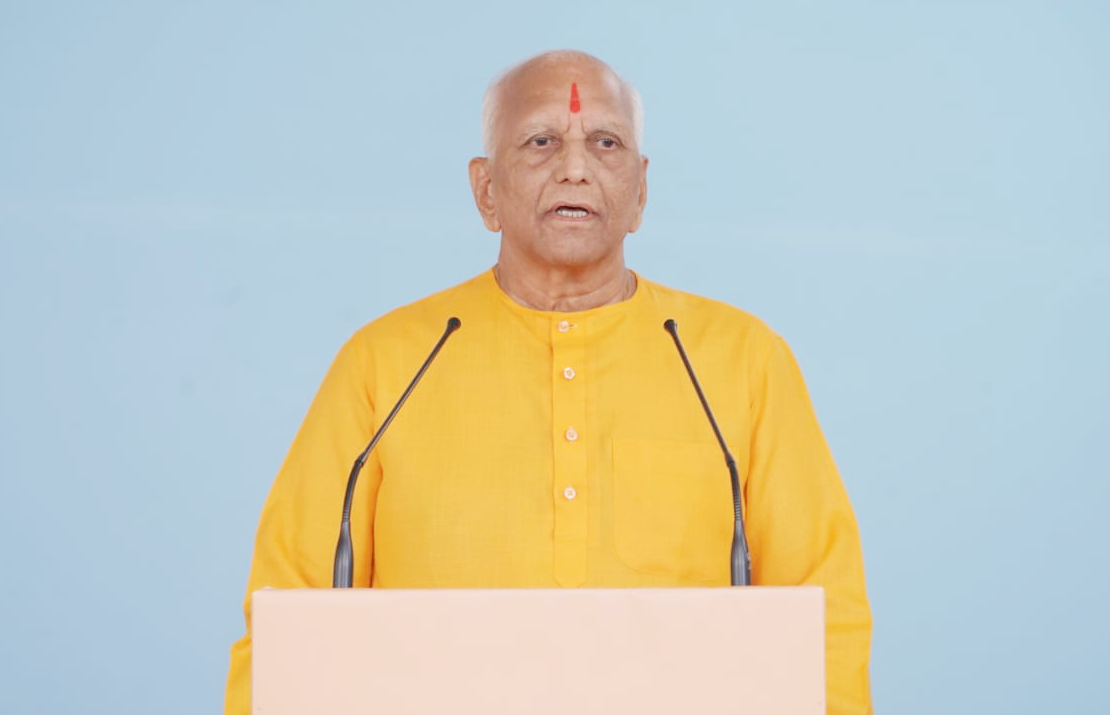 At present, self-proclaimed progressive folk who are atheists anyway and those with no faith in Hindu Deities are protesting against dress codes in temples. Their claim is that it infringes on their freedom of expression. Going to temples in rags or in unconventional attire cannot be ‘freedom of expression’. Everyone has the freedom to choose what to wear in their home and in public; But a temple is a place of worship. One’s individual conduct must be according to Dharma there. Here, it is not the individual freedom but the practice of Dharma that is important”, said Sanatan’s Saint Sadguru Nandkumar Jadhav. He was guiding the audience about ‘Implementation of dress codes in Temples’ during the session on ‘Ideal Administration of Temples’ in the ‘Hindu Rashtra Sansad’.

1. The Tamil Nadu High Court has also directed that a dress code be implemented in temples from January 1, 2016, recognizing that ‘one should wear sattvik attire to enter temples there’. Accordingly, devotees are required to wear only traditional Indian attire.

2. Shri Mahakaleshwar temple of Ujjain, Shri Ghrishneshwar temple in Maharashtra, Shri Kashi-Vishweshwar temple in Varanasi which are among the auspicious 12 Jyotirlings, the Shri Tirupati Balaji temple in Andhra Pradesh, the famous Shri Padmanabhasvi temple in Kerala, Shri Mata mandir in Kanyakumari have all enforced a sattvik dress code on the visiting devotees.

3. We also appeal to all temples in India to give priority to the practice of Dharma in temples by applying a Vastra Samhita (dress code).

Devotees undertake pilgrimages to temples from afar, as these temples are a source of Chaitanya (Divine consciousness). The invaders have destroyed thousands of temples. Hindus are still fighting for the restoration of these temples. On the other hand, secular governments are taking over temples. The government views temples as a source of income, while not contributing to the construction of temples. Temple funds are being misused. Cases are pending in the courts against several temple committees. It is also important that the funds donated to temples are properly utilized. For this, temples need to be administered well. 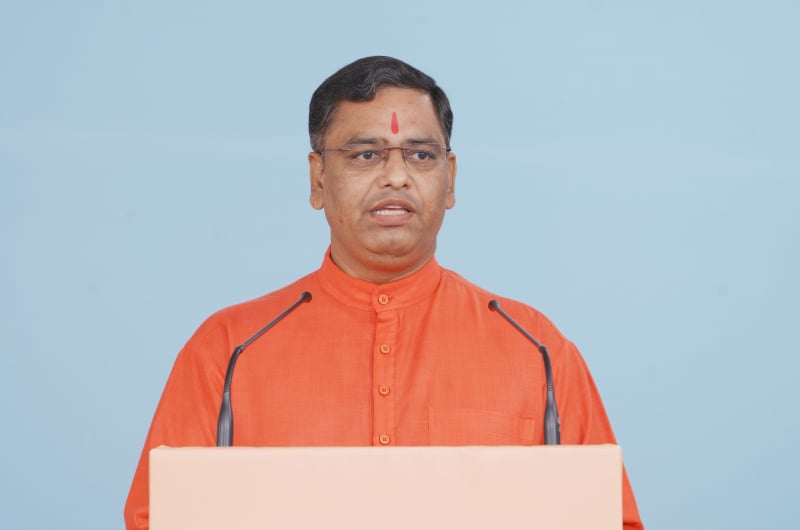 “There is an ancient connection between Hindu Dharma and temples. Temples have contributed immensely to the protection of Dharma. Therefore, temples should be administered well. The temples are not there only for the rich but also for the common people. Therefore, the general public should be considered while making arrangements in the temples”, asserted Shri. Ramesh Shinde, the National Spokesperson of Hindu Janajagruti Samiti.

1. The pavements in modern temples are made of ‘marble’ or ‘granite’ which are impractical during the summer season as they burn the bare feet of pilgrims. As a solution, temples can emulate the Gurudwaras which have flowing water to cool the feet of the pilgrims. Trees also need to be planted in the temple area to keep the area cool.

2. Arrangements for utilizing the offerings coming to the temple should be transparent. The temple funds should be used for the propagation of Dharma.

How can a government that cannot manage its own affairs, manage temples ? – Advocate Virendra Ichalkaranjikar, National President, Hindu Vidhidnya Parishad 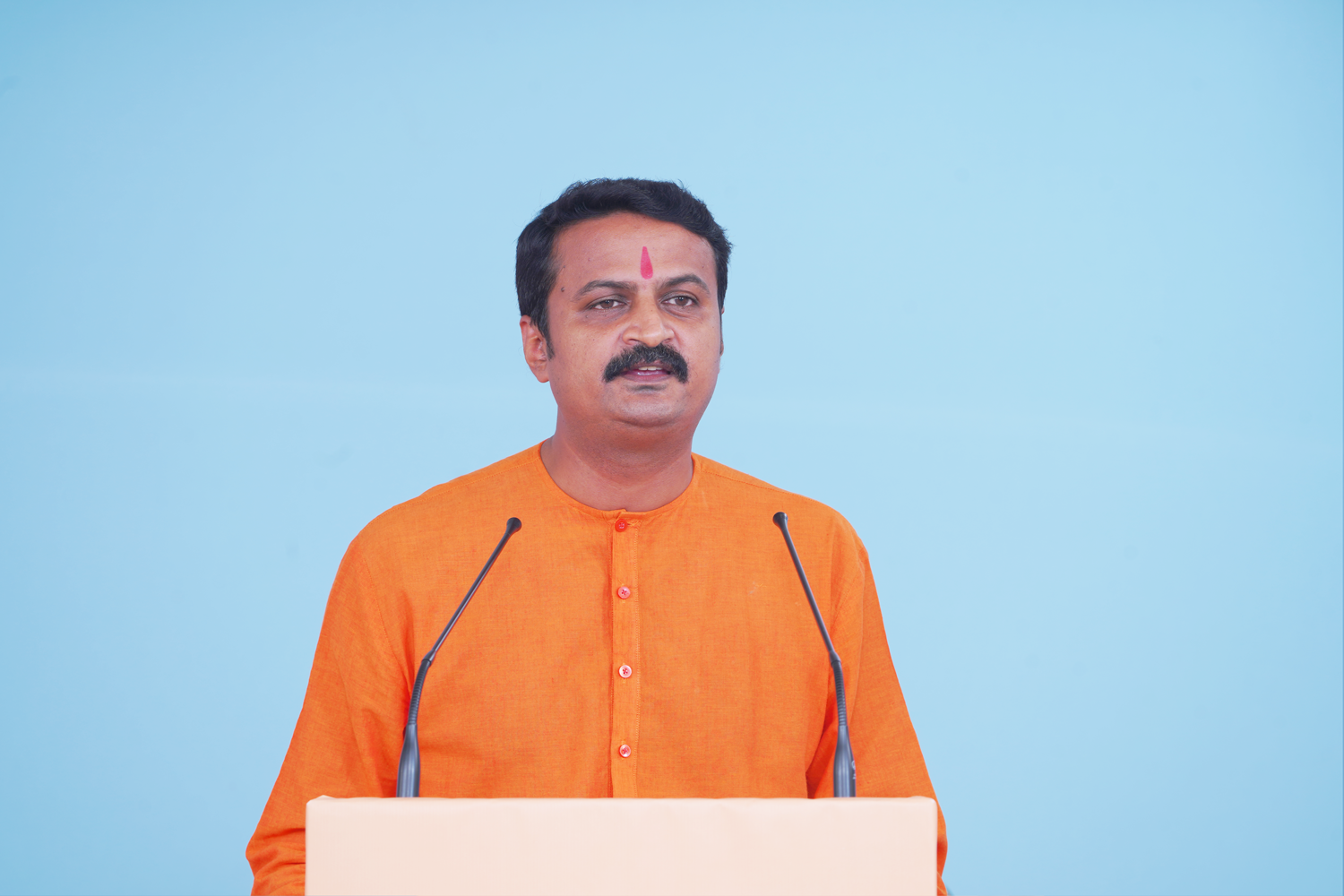 Today, it has become necessary to form a pressure group of Hindus for the protection of temples. Temple funds should be used for Hindus; But instead, in many places, temple money is used for social work. Shirdi Devasthan provided Rs. 500 crore for the construction of a dam. The funds were not actually given to the farmers but for the political gain of a local political leader. Employees working in the private sector are penalized for shoddy work; so the punishment must be doubled if the temples are administered shoddily. If the government cannot manage its own affairs, then how will it manage the temples? We have to consistently highlight this inefficiency of the government. 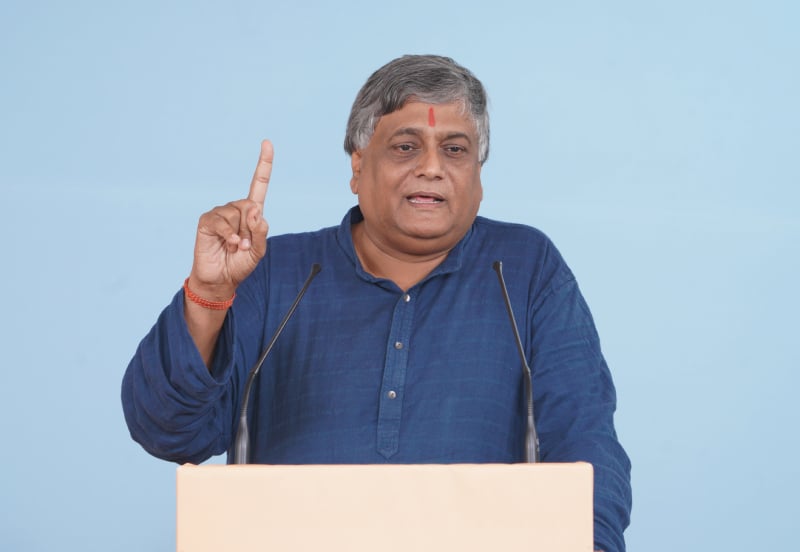 There are malls in many temples. These malls are to attract tourists. Temples are not tourist destinations, they are religious centers, centres of Dharma. Tourists enter the temples in rags. Temples must have a dress code. Some temples are well managed. Hindus should show the world how to manage temple affairs.

Experiences of other dignitaries who participated in the Hindu Rashtra Sansad !

1. H.B.P. Madan Tiramare, Gajanan Maharaj Seva Samiti, Amravati – We tried to bring together people of all ages in many temples, with the idea that collective worship would benefit them. This collective worship has fostered unity among the people of the village as well as initiated positive changes in them.

3. Shri. Mahesh Dagla, Chairman, Hindu Upadhyaya Samiti, Andhra Pradesh – Malpractices in the Tirupati Balaji Temple should make Hindus realise that temples should be freed from the yoke of government.

4. Shri. Ganesh Mahajan, Chairman, Sridvadash Jyotirlinga Arya Vaishya Nityann Satram Trust, Nanded – For the last 75 years, my ancestors have undertaken the noble work of Annadaan (food donation). I will continue to do that work and spend the rest of my life in this service.

5. Shri. Shankar Kharel, Nepal – In many places, brokers approach you as soon as you reach the temples for darshan. Temples are becoming centres of trade. Over the last 32 years, communists have swallowed land belonging to Hindu temples. That is why temples need to be protected.

6. Swami Sanyuktanand Maharaj, Bharat Sevashram Sangh – India is a country known for its temples. This is the place where Deities are worshipped with great devotion. Temples forge a bond between the individual and the Deity. At present temples are becoming commercial complexes. It is necessary for all Hindus of India to unite and strive to change this.

7. Shri. Madan Upadhyay, Shri Ram Shakti Samaj Rakshan Kendra, Chhattisgarh – The appointment of paid priests to temples has resulted in the sacred worship of the Deity turning into yet another job. Therefore, priests should also be taught to manage temples.

8. Shri. Ganesh Singh Thakur, Secretary, Kshatriya Samaj Rajput Sanghatan – We fought a court battle against the corruption in Shri Renukamata temple at Nanded. Those involved were punished. This was possible due to the blessings of Shri Renukamata.

9. Shri. Nidhish Goyal, ‘Jamboo Talks’ YouTube Channel, Jaipur – The sanctum sanctorum of temples is like the sun, it does the task of spreading Chaitanya (Divine consciousness) everywhere. One should understand the history behind the temples.10. Dr. Nilesh Lonkar, Chairman, Swatantryaveer Savarkar Yuva Vichar Manch, Pune – There should be cleanliness and quiet in the temple, as well as ritualistic worship of Deities. There should be no non-Hindu employees in the temple, and if they want to work in the temple, they should accept Hindu Dharma.

11. Shri. Sharad Kulkarni, Public Relations Officer, Mangalgraha Devasthan, Jalgaon – There is an idol of Bhagwan Mangal at Amalner in Jalgaon (Maharashtra). This temple is very ancient. The Deities are worshipped as per the scriptures in this temple. The priests wear clean clothes meant to be worn especially during worship. Due to this, the temple has retained Chaitanya. Informative hoardings on practicing Dharma have been put up in the temple premises.

Resolutions passed in the Hindu Rashtra Sansad to chants of ‘Jayatu Jayatu Hindutrashtram’!

A. Temples should be freed from government control and be handed over to devotees.

B. People of other religions should not be deputed or employed for any work in Temples.

C. Proselytizing, promoting other religions, as well as the sale of alcohol and meat in the temple area should be completely banned.