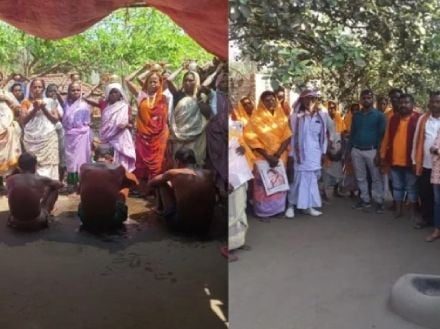 While Christian missionaries operating in the rural hamlets of Jharkhand have been luring vulnerable tribals with land and money in order to convert them, members of various Hindu outfits have been working tirelessly to free these innocent tribals from the clutches of such evangelists.

A week after 181 tribal community members were converted back to their Sarna religion in different villages of Jharkhand’s Garhwa district, hundreds of people from 61 families of Vanvasi (tribal) Samaj in Jharkhand’s Sahibganj district did the same on March 25, 2022.

According to reports, Vishwa Hindu Parishad (VHP) Department Minister Kalicharan Mandal had organised a program for the return of these 61 Sarna tribal families in the Sahibganj district.

In fact, VHP’s Kalicharan Mandal has been running a ‘ghar wapsi’ or the reconversion programme in five villages in the district’s Barhait block. In the program, all the Christian converts who wished to revert to their original faith were welcomed as per the tribal tradition. Kalicharan Mandal and Upendra Kushwaha, regional head of the VHP, are in charge of the programme. Their goal is to persuade people who have been duped into becoming converts by the Christian Missionaries operating in these hamlets to return to the Hindu fold.

As soon as the VHP members learn of such an incident, they rush to the scene and rescues the innocent and vulnerable Adivasi, people belonging to the Pahadia caste, Dalit society, and the poor from the clutches of Christian missionaries.

It is worth noting that recently as many as 181 members of a tribal community whose ancestors had embraced Christianity many years ago were converted back to their Sarna religion in different villages of Garhwa district in Jharkhand.

The Dharma Jagran and Tribal Suraksha Manch organised the Saraedih Village Tribal Conference for the return of the Sarna tribals. In the program, all the Christian converts who wished to revert back to their original faith were welcomed as per the tribal tradition of washing their feet.