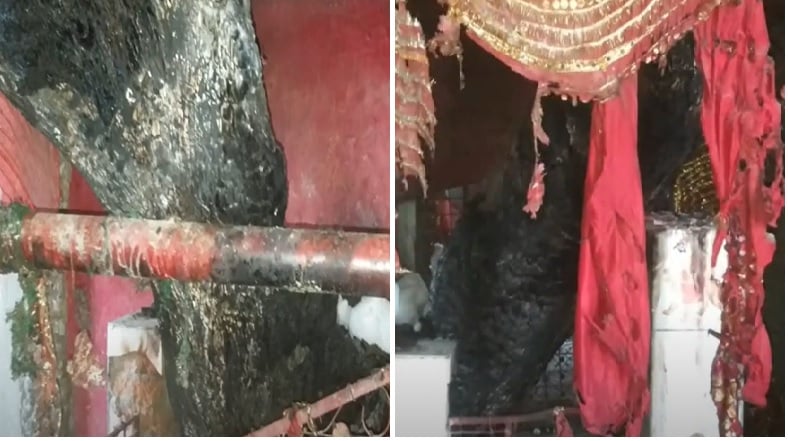 An ancient Hindu temple has been burnt down, again, in Kashmir. The thousands of years old Mata Tripur Sundari temple located in a remote forest area near Devsar town, district Kulgam, south Kashmir, was burnt on the intervening night of 13th and 14th January. The same temple had been burnt down three decades back by religious zealots, and was being recently reconstructed by Hindu groups.

Members of various Hindu organisations held a protest in front of Jammu Press Club, demanding a thorough probe while totally rejecting the police theory that the fire took place due to burning of a Diya in the shrine. 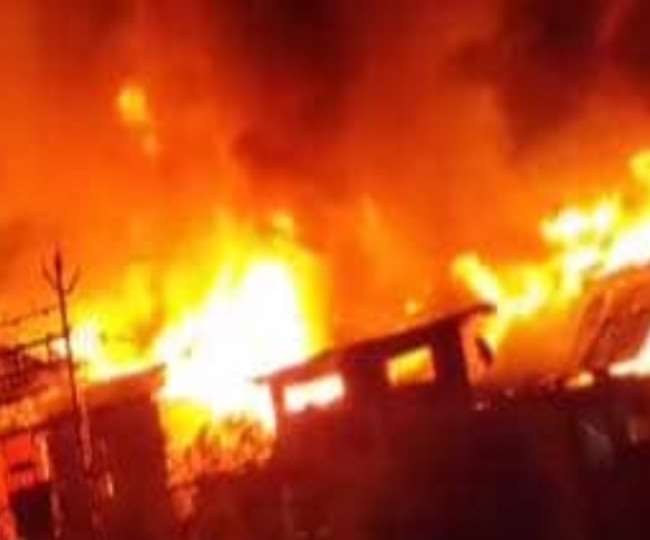 “The minor fire incident in Mata Tripur Sundari (Devsar) temple is being investigated by Police. Pre Enquiry reveals #Fire happend accidentally by the DIYAs/ARTI being kept in Temple for daily routine…No signs of Miscreant act. Public are requested not to pay heed to rumors (sic),” Kulgam district police tweeted.

Devotees questioned how the fire broke out at midnight in such extreme cold conditions and how the tree, considered to the seat of the deity, was burnt while curtains and threads offered by devotees were not.

“It’s not possible that diyas could cause such fire, that too, when no one enters the temple these days…how can a diya cause fire at 1 am,” Sunita Dhar, a resident of Devsar asked. Locals said arti is not performed at the temple off late as it remains closed.

“This is unacceptable and the local authorities rushing to conclusions without investigating is even more tormenting,” former BJP lawmaker Surinder Ambardar said.

Police also offered another ‘explanation’ – they said an Army team had cleaned and sanitized the temple in the midnight and the fire may have triggered during the cleanup. The Army has not responded on this as yet.

The activists of Vision Kashmir also joined the protest and denounced the torching of the holy shrine as a conspiracy. They too demanded a thorough probe into the matter . The protestors urged the LG administration to take serious note of the criminal act and take stringent action against the culprits besides providing adequate security to Hindu shrines and temples in the Valley.

Protestors questioned how fire broke out in such cold season when the area is snow bound and what are the reasons behind the fire incident. Rakesh Kaul, councillor from Mattan, demanded immediate constitution of Kashmiri Hindu Shrines and Temples Board for the upkeep and protection of Hindu religious places in the Valley.

As Hindu activist Vijay Raina pointed out in his video report on the incident, the Mata Tripur Sundari shrine had been burnt down in 1992 along with several other temples in Kashmir, as retaliation for the razing of the disputed Babri structure at Ayodhya, UP. Over the last 5-6 years, the Kashmiri Pandit community has been rebuilding the shrine. But now, the the Garbhagriha (sanctum sanctorum) of the shrine, which had somehow survived earlier attacks had been burnt down.

In 2012, the J&K government said that 208 Hindu temples and shrines were vandalized over the last two decades, ever since the last major Kashmiri Hindu exodus that took place from 1990 onwards. Activists believe the actual number of temples desecrated would be even higher, and the Islamist radicalization in Kashmir is so deep that such acts continue to take place even after abrogation of Article 370 in 2019 ended the special status enjoyed by valley-based Islamists at the expense of all other citizens.