A case was temple vandalisation has come to the fore in Mahoba, Uttar Pradesh, where some unidentified miscreants destroyed a Sai Baba temple and built a Mazar at the spot instead. The act was carried out on the night of November 3 (Wednesday). 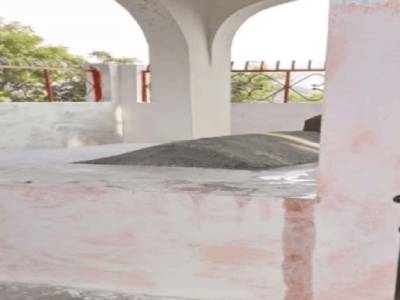 According to reports, there is an ancient platform of Sai Baba near a river in Majra Simaria of Budera village Panchayat of Panwari, Mahoba, Uttar Pradesh. Some miscreants, late on Wednesday night, threw the idol of Sai Baba in the nearby bushes and replaced it with a green flag. They also repainted the platform where the idol was placed green.

The villagers were enraged the next morning when they saw that the ancient Sai Baba’s temple had been desecrated and transformed into a Mazar. In light of the scenario, the Mahoba police sprung into action and removed the tomb promptly to avert any untoward incidents. The flag was likewise removed and the platform was repainted white. A heavy Police force has been deployed in the area ever since.

The matter came to light when villagers reached the temple on November 4 (Thursday). The angry villagers complained about the incident to the police. They wrote a letter to the SDM demanding prompt and strict action against the perpetrators. As soon as the police received the information Kulpahar SDM Shweta Pandey and SHO of Panawadi reached the spot along with the police force.

The tomb was removed in the presence of the SDM, and the temple was repainted in white paint. After this, the villagers reinstated Sai Baba’s idol at the spot.

In the evening, Additional SP RK Gautam and ADM Ramsuresh Verma paid a visit to the venue and urged the villagers to continue worshipping as before.

The Mahoba police also took to Twitter to say that the Mazar had been removed from “mutual consent” and that further investigation is under way.

Alleging that the police were undermining the gravity of the situation by calling it a handiwork of some chaotic elements, the villagers claimed that this act was just not like any other incident but part of a well-planned conspiracy. Asserting that no one person could build and paint a tomb overnight, the irate villagers called it a well strategised, coordinated and collective conspiracy. They urged police to promptly identify and punish the perpetrators.