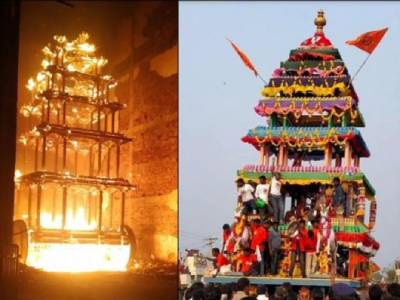 Tollywood actor and Jana Sena head Pawan Kalyan along with thousands of leaders and activists of the BJP sat on an 11-hour long hunger strike to protest against the alleged burning of the temple chariot in the Lakshminarasimha temple in Andhra Pradesh. The BJP and the Jana Sena collectively gave a call for the hunger strike in the name of ‘Dharma Parirakshana Deeksha’ (penance to protect Hindu dharma).

The parties demanded that stringent action should be taken against those responsible for setting ablaze the temple chariot. Kalyan who took deeksha at his house in the morning, claimed that the attacks on the Hindu temples have increased under the government of Jagan Mohan Reddy in the state. He demanded that a retired judge should be appointed by the government to investigate the temple chariot burning. Kalyan said that if the government did not take swift action, he will approach the central government and request a CBI investigation in the matter.

The hunger strike was also joined by former state BJP President Kanna Lakshminarayana at his residence in Guntur. He also made similar allegations against the Reddy government in the state and said that attacks on Hindu temples had increased under his regime. “The burning of chariot at Antarvedi was atrocious and it has hurt the sentiments of Hindus. Similar incidents had taken place at various temples in the past. Had the government acted in the past, such incidents would not have recurred”, he saidd

A 62-years old temple chariot which located inside the Sri Lakshmi Narasimha temple was gutted in fire on Sunday. The temple is located in the one of the most revered Vaishnavite religious centres in Antarvedi in East Godavari district of Andhra Pradesh. The incident had created huge disturbance across the state.

TDP chief and the leader of opposition in the state N Chadrababu Naidu termed the incident ” a heinous attack carried out by some anti-social elements”. He demanded safety audit for the properties of Hindu temples.