Mumbai : Hindu Janajagruti Samiti (HJS) recently held ‘Shaurya Jagaran (awakening of valour)’ workshop at ‘New Parashuram Kreeda Mandal’ of Kala Chowkie. Shri. Balwant Pathak and Shri. Prasad Mankar of HJS addressed the participants while concluding the workshop. The participants spontaneously said that they have established Hindu Rashtra in their mind, so also in life since that day.

We should be united to fight against various evil tendencies in society for which awareness needs to be created amongst people. We must devote at least one hour daily for the mission of establishing Hindu Rashtra. We learnt ‘sadhana (spiritual practice)’, ‘Dharma-shikshan’ and self-defence in this ‘Shaurya Jagaran’ workshop. Now, let us take the responsibility of creating awareness towards the same amongst our Hindu brethren.

Study of mistakes committed in past is essential for creating bright future ! – Shri. Prasad Manakar, HJS

Ill effect of mistakes committed in the past history is faced by that nation for many years. There are many examples in history, effect of which is faced by us even today; therefore, history is important. One, who forgets history, cannot create history; hence, efforts should be made to remove the defects which had led to such mistakes.

1. The participants showed interest in attending self-defence training class for women and ‘Dharmashikshan’ class once in a week.

2. Information was given on ‘Valentine Day’ in the workshop due to which a young boy of a devout Hindu participant explained it to his mother after going home and celebration of this Day was avoided.

Hindu Rashtra can be established only through spiritual practice and worship of valour ! – Sumit Sagavekar, ‘Yuva Sanghatak’, HJS 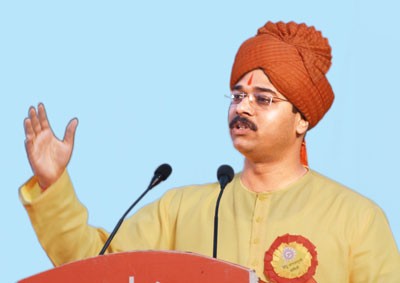 Dapoli : Macaulay’s education system was introduced by the British, who ruling this country, which took Hindus away from their Dharma and culture. The British said, when they left India, that Hindus would feel ashamed to follow their Dharma and culture which seems to have come true. Perverted mentality of celebrating different ‘Days’ has stricken every house in this country which is the outcome of our not getting information on own festivals, religious festivals, ways of worshipping, science, ‘Dharmashikshan’ etc. and schools and colleges not teaching history of valour. Hindus are giving up own Dharma falling prey to small baits. Aurangzeb continuously tortured Chhatrapati Sambhaji Maharaj for 42 days but he did not change his Dharma. Chhatrapati Shivaji Maharaj established ‘Hindavi Swarajya’ with the blessings of ‘Kul-devata’ and Saints. Hindu Rashtra can be established with such kind of worshipping of valour and spiritual practice, stated Shri. Sumit Sagavekar, ‘Yuva Sanghatak’ of Hindu Janajagruti Samiti (HJS) while speaking on the topic of Superiority of Hindu Dharma and awakening valour’ during a program held at Shri Ganesh Mandir at Rukhi village in Dapoli taluka. It was attended by 125 devout Hindus including Sarpanch Sou. Prachi Mandavkar, Shri. Anant Mandavkar, President-Rukhi village, Shri. Babu Mandavkar, Secretary, Shri. Paresh Gujarathi and Shri. Dinesh Kadav of HJS. The program was compeered by Shri. Suraj Chavan.

Lecture held by HJS under its ‘Shaurya Jagaran’ drive at Tale (Tal. Khed) 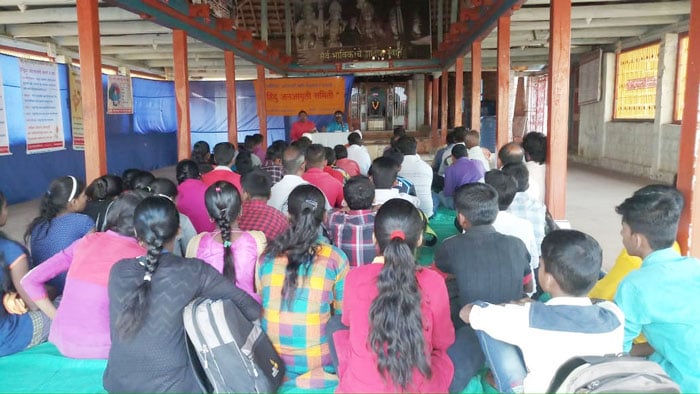 Khed : Today’s young generation has drifted in wrong direction due to absence of knowledge related to Dharma and lack of valour. Our Hindu Dharma is expansive; it thinks of welfare of the Universe. We need to get ready to pull out this country against several challenges and of problems faced by us. A devotee can sail through the period of crisis only with the grace of God. Hindu Rashtra will be established with the grace of God after 2023 but we need to increase spiritual practice. Awakening valour is required for establishing Hindu Rashtra and spiritual practice is necessary for tiding over the period of crisis, stated Shri. Niranjan Chodankar, ‘Yuva-Coordintaor’ of Hindu Janajagruti Samiti (HJS) during a lecture held under its drive of ‘Shaurya Jagaran’ at Shri Waghajai Mandir, Deulwadi, Tale on 6th February. Professor Omkar Jarali explained various activities undertaken by HJS related to establishing Hindu Rashtra, to the attendees.

The lecture was started after offering a coconut and garland to ‘Gram-devata’ Shri Waghajai Devi. Shri. Akshay Kadam and Prof. Omkar Jarale staged demo on self-defence after the guidance. The program was compeered by Smt. Sujata Samant. Participating youth spontaneously joined group discussions held after the lecture. It was decided to conduct ‘Dharmashikshan’ classes and self-defence training at Tale.

We feel we can rely on selflessly working HJS ! – Devout Hindu participants

Vasheni (Uran) : Hindu Janajagruti Samiti (HJS) held a workshop for a week at Shriram Mandir for local devout Hindu youth on ‘Shaurya Jagaran (Awakening of valour)’. Information was given on importance of ‘Dharmashikshan’, glorifying and inspiring history of Hindus, our brave kings and revolutionaries, for awakening of valour amongst the participants. Demos were staged on karate, ‘lathi-kathi’, use of chain etc in self-defence; showing various techniques. Shri. Hemant Pujare and Shri. Rajendra Pavaskar of HJS also guided participating youth. They showed interest in joining weekly training class on self-defence. The participants thanked HJS in the end and said that they feel secure with selflessly working HJS.