Every person’s contribution is important in the mission of establishing Hindu Rashtra! – Govind Chodankar, HJS 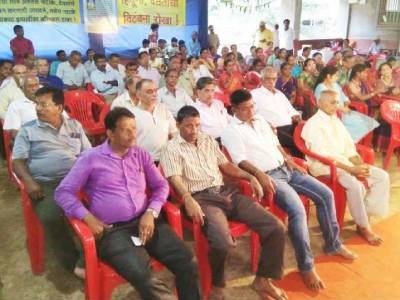 Ponda : More than 1000 ‘Hindu Rashtra-jagruti Sabha’ have been held so far all over the country for the demand of Hindu Rashtra and for creating awareness amongst Hindus towards the same. As a result, issue of Hindu Rashtra is now being discussed at national level. Various problems faced by Hindus, Kashmir problem, conversions, cow-slaughter, Uniform Civil Code, attacks on temples etc have been brought forth through the medium of these ‘sabhas’ and the Government is now taking note of the same. Article 370 has been withdrawn and the path of constructing Ram-Mandir has also been cleared. We have faith that with the grace of Prabhu Shriram, even obstacles in establishing ‘Rama-rajya’ i.e. Hindu Rashtra would be removed. Every person’s contribution is valuable in the mission of establishing Hindu Rashtra, stated Shri. Govind Chodankar of Hindu Janajagruti Samiti (HJS). HJS had held ‘Hindu Rashtra-jagruti Sabha’ at Shri Betal Mandir Hall, Priyol, Mhardol which was addressed by him. Sou. Shubha Sawant of Sanatan Sanstha was also present on the occasion.

The program was compeered by Sou. Shambhavi Damle who also did ‘thanks-giving’ while concluding the program.

Sou. Shubha Sawant of Sanatan Sanstha said while speaking on the topic of ‘Specialities and Strength of Hindu Dharma’, “Hindu Dharma teaches how to face problems and how to lead happy life. Spiritual practice is necessary for leading happy life. We should win over ShriGuru by practising ‘Ashtang sadhana’ with chanting, satsang, satseva, tyaag (sacrifice), ‘preeti (spiritual love)’, eradication of personality defects and ego so also by invoking ‘bhav (spiritual emotion)’.”

1.Participants attending review meeting after the ‘sabha’ for local devout Hindu activists for deciding future course of action related to protection of nation and Dharma, showed interest in HJS’ conducting ‘Dharmashikshan’ class and ‘Bal-sanskar’ classes while offering to obtain necessary permissions required for holding such classes.

2. Smt. Savita Naik (age-70 yrs) staying near the venue of the ‘sabha’, cancelled her personal work for attending the ‘sabha’.

3. Local residents reached the venue 15 minutes before the start of the meeting.

4. Shri. Rajesh Chodankar, a devout Hindu activist from Shirsai which is 40 kms away from the venue of the ‘sabha’, also attended the ‘sabha’.