Hindu Janajagruti Samiti (HJS) have received several complaints from devout Hindus regarding the sale of a “Yoga mat” having the sacred Hindu symbol “Om” printed on it by “Kaivalyadhama” (www.kdham.com) available on various shopping portals. Here is an example of such a mat. 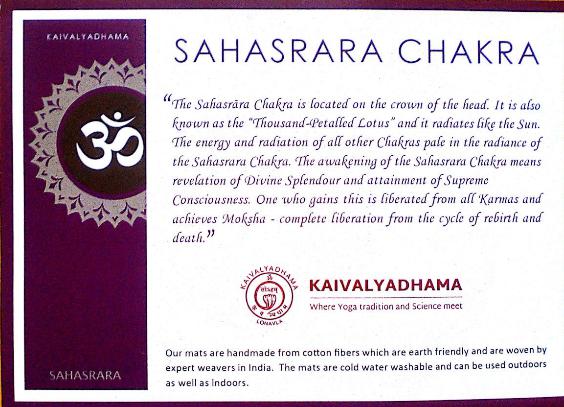 Upon reviewing the complaints and portal, the HJS team immediately notified and appealed to the actual seller “Kaivalyadhama” (www.kdham.com) to review the mat designs and take appropriate action. In the appeal, HJS explained how the Hindu sacred symbol OM will get disrespected by not maintaining its sanctity according to the principles of Sanatan Dharma. In addition, the appeal also expressed concerns that using the Hindu sacred symbol loosely on mats for commercial purposes not only hurts the sentiments of Hindus but it denigrates the highly revered symbol.

Unfortunately, the HJS team has not received any response from the customer support team. Consequently, HJS now requests all readers to appeal against this appalling denigration peacefully and lawfully by calling them or writing a message using below link requesting them to remove the denigrating Yoga mat and not to make and sell such denigrating products in the future.

We at Hindu Janajagruti Samiti (HJS) have received several complaints from devout Hindus regarding sale of “Yoga mat” having the sacred Hindu symbol “Om” printed on them by your organization “Kaivalyadhama” available on various shopping portals.

We have reviewed these shopping portals for the above-mentioned items and would like to bring to your attention how these designs are denigrating the sacred Hindu symbol of worship. There is spiritual significance for chanting the mantras and the divine symbol “Om”. There is spiritual energy associated with chanting of these mantras which helps a seeker to progress spiritually. Here is a pic of one such mat.

As per Hinduism, ‘Om’ is one of the most important spiritual symbols. It refers to Atman (soul) and Brahman (divinity). The syllable is often found at the beginning and the end of the chapters in the Vedas, the Upanishads, and other Hindu holy texts. It is a sacred spiritual incantation made before and during the recitation of spiritual texts, during puja (ritualistic worship) and prayers, in ceremonies such as weddings, and spiritual practice such as Yoga.

Using the Hindu sacred symbol loosely on mats and other apparel not only hurts the sentiments of Hindus but it denigrates the highly revered symbol of Sanatan Dharma. It also sets a wrong example for others who might think that ‘Om’ symbol can be used anywhere.

To explain more, the user, while doing Yoga on these mats, will touch this sacred symbol with his feet or may sit on it, which itself is a denigration of OM. Hindus treat their divine symbols with utmost respect. Thus, having sacred symbols anywhere else like on clothes and accessories amounts to denigrating Hinduism and hurting the feelings of millions of Hindus across the world.

While your dedication in promoting Yoga, teaching Geeta, Ayurveda, etc. is commendable; however, we urge you to consider the above points and remove the product from your website which are not in accordance with Hinduism. We stress that our aim in bringing up these points is to educate and ensure that Hindu Deities and symbols gets accurately represented in society. Hinduism has been misrepresented and misappropriated at many levels. Though it is an ancient tradition, Hinduism has a lot to offer the modern world and we want children and adults alike to be able to understand and study it without it being misrepresented or misappropriated. You can take one step towards ensuring that this sacred symbol does not get disrespected by removing it from your website.

Hindu Janajagruti Samiti (HJS) is a registered NGO in India doing social, Hindu Dharma related and national welfare work. The Samiti is also active throughout the world, educating people about Hindu Dharma in a scientific way, campaigning against malpractices done as Hindu Dharma related practices and solving problems related to the misrepresentation of Hindu Dharma. For further details, please refer to our website www.HinduJagruti.org.

Awaiting your prompt action and reply.