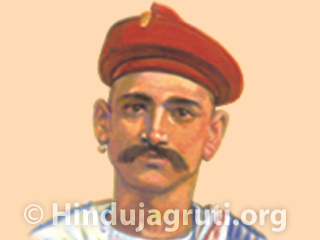 India won freedom due to the blood and tears shed by hundreds of nameless revolutionaries and their families who braved British barbarity and faced death, deportation, imprisonment and forfeiture of property. Freedom was certainly not won by pleas, prayers and petitions. It was won substantially by violent and armed struggle by revolutionaries, a process that culminated in the Naval Uprising of 1946. The struggle for freedom was carried out not only in India, but also abroad, by people such as Shyamji Krishnavarma, Veer Savarkar, Madam Bhikaji Cama, Barrister Sardar Singh Rana, Virendranath Chattopadhyaya, Sardar Ajit Singh, Lala Hardayal, Rasbehari Bose, Raja Mahendra Pratap and Champakraman Pillay. In this illustrious list of fiery patriots, Chapekar Brothers stands out for their sheer courage and supreme sacrifice.

The Chapekars are Chitpavan Brahmins coming from Konkan. The family came over to the Desh country and settled at Chinchawad near Poona where the three brothers, Damodar, Balkrishna and Wasudeo, were born about 1870, 1873 and 1879 respectively. The father Haripant followed the priestly profession repeating Kirtans or stories from scriptures and verse at different houses, in Poona and Bombay.

The sons did not receive much formal education, they learnt reading and writing and began helping their father in his Kirtans as they grew. Their profession insisted on the performance of the daily Brahmanical rites, and in the general atmosphere of orthodoxy of Poona the brothers developed a strong conservative attitude, intolerant of the social reform movement.

As the Chapekars grew, Poona became the storm-centre of several controversies over the Age of Consent Bill, the Sharadashram of Pandita Ramabai, a Christian convert, and the Hindu-Muslim riots. The Kesari and other local papers were championing the cause of orthodoxy, and in this atmosphere the Chapekars began to feel that a deliberate attempt was being made to humiliate Hindu religion by the reformers and Muslims, at the instigation of the British government. They felt they had to do something for their faith.

They organized an association called “Chapekar Club” for physical and military training which they also called  as “the society for the removal of obstacles to the Hindu Religion”. Their activities took the form of attacking leading social reformers in the dark, putting tar on the Queen’s statue near the Esplanade in Bombay and burning the examination pandal. They became active members of the Ganapati melas the lustily sang songs praising Shivaji for “his daring deeds and exhorting the audience  to risk their life on the battlefield in a national war to shed upon the earth the lifeblood of the enemies who destroyed Hindu religion”.

About the end of 1896 plague assumed an epidemic form in Bombay presidency and the British mercantile community panicked lest it might reach the shores of the British isles and affect their commerce. The government of India was asked to pursue strong measures to stamp out the epidemic. A law was passed and special officers were appointed in plague-affected areas to fight the disease. Rand was posted to the city of Poona in February 1897 and lost no time in establishing a plague hospital and segregation or quarantine camps and starting a campaign to disinfect the affected localities.

British soldiers were used to implement the programme strictly. This caused no little harassment to the public when their houses were searched, their family worship-places desecrated, their household goods scattered or destroyed and their womenfolk very roughly handled. The plague officer Rand showed little deference for public opinion and his high-handed conduct came in for strong criticism from the local press.

The Kesari and other papers asked the people not to suffer quietly the oppression of Rand’s rule. The Chapekars could not remain immune to the propagandas. They wanted to terrorise the government officers. They felt that by celebrating the diamond jubilee of Queen Victoria’s rule, the government was adding insult to injury. They determined to take revenge and decided to kill Rand, the chief source of all the harassment.They procured weapons and watched Rand’s movements for a few days.

The year 1897 was the 60th year of Queen Victoria’s regime. A program was organized even in Pune on this occasion at the ‘Raj-bhavan’ in ‘Ganesh Khind’. On 22nd June 1897, Rand and Yurts left after attending the program at night in their respective horse-carriages. The carriage in which Yurts was travelling was a little ahead. As the watchword ‘Gondya Aalaa Re Aalaa’ (Target has come) was called out by Vasudevrao, It was a signal for Balkrishna to finish off Rand, the infamous British officer who had created much distress among the masses with his tactless handling of the Pune plague.Fired with revolutionary zeal, Balkrishna boarded the covered carriage and shot the occupant dead. Suddenly he found that it was Lt Ayerst, an associate of Rand.

Even then, the call was going on, therefore, Damodarpant understood what had happened. He was also happy that although he thought that he was deprived of the opportunity by Balkrushna, now was his chance to take action. He stopped Vasudevrao who was running after Rand who was in the 2nd and he jumped into the coach. He drew aside the curtains and emptied his revolver into Rand’s head from the back. Damodarpant got off the horse-carriage very happy for having accomplished his mission.

None of the incidents was noticed by either of the coachmen. All this happened after midnight. The road was deserted and the young men who shot lyerst and Rand disappeared in the dark .

The killings shook the British empire and soon special officers were appointed to investigate into the murder . The reward of Rs 20,000 rupees was announced by British Government for the person giving information on the whereabouts of the assassins, who had added a colourful chapter to the history of the freedom movement of India.

The police resorted to ruthless repression in order to strike terror in the hearts of the people. The Anglo-Indian press, and particularly The Times of India, wrote insinuating articles alleging that Lokmanya Tilak’s speeches had incited the killers to kill Mr Rand and that the Poona Brahmins had conspired to overthrow the British government.

In the meantime, Damodar Chapekar had been arrested for Rand’s murder in Bombay. Chapekar took the entire responsibility of the murder upon himself. People were amazed when they came to know of his fearless statement in the court. On 2nd March 1898, in the Sessions Court, Damodar was found guilty and sentenced to death.

While Damodar Chapekar was kept in the Yervada prison in the ward for prisoners to be hanged, Tilak was kept in another ward of the same prison. Damodar Chapekar requested the authorities at the prison to be allowed to meet Tilak once at least. The permission was granted. When Damodar met Tilak, he asked him for a copy of the Bhagawad Gita and requested that after his death the last rites should be performed according to the Hindu religion. Tilak gave a copy of the Bhagawad Gita to Damodar and the latter went to the gallows, quietly holding the religious book in his hands.

Tilak arranged for the funeral and the last rites to be performed according to the deceased’s wishes.

In the second week of May 1899, Vasudeo, his brother Bal Krishna and Ranade – all three were hanged in the Yervada prison.

All the three brothers felt they were dying for a lofty cause and showed no signs of fear or remorse when mounting the gallows. They were all married but left no issues.

The supreme sacrifice made by the three brothers was unique and evoked respect in the hearts of the people. Tilak arranged for the last rites of the three brothers and their associate Ranade, who had laid down their lives for the honour of their motherland.

The lion of Punjab, Lala Lajpat Rai on Chapekar brothers

Are you ready to place your lives in the hands of Bharatmata?

Freedom fighters like Bhagat Singh, Savarkar hated the British and they stood against the British with all their might. They made every sacrifice including the highest one of their life. The names and faces are innumerable! How was this possible ? What was the drive behind their selfless acts?
Today the situation is quite different. At that time we had a powerful family system which was dynamic and vibrant. Because of this we could have patriots in our country. During the British time the education was partisan. From the school curriculum, Hindu Dharma, our culture, our Gods and Goddesses were detracted. But we in our homes were stoically faithful to our Gods. Besides, fortunately there were many religious books available outside schools. The people subscribed to the British viewpoint only to pass the exams. But everyone knew in their hearts that this was untrue. Such was the powerful current of thought prevailing in the minds and hearts of our people and every household that no effect of vicious education of British was felt. In short, it is because of our family system and values that previous generations were properly guided. But unfortunately today our family system is being destroyed. Due to this, the Hindu today is becoming fearful, ignorant and lost in the whirlpools of the world.
The revolutionary Chapeker Brothers whose exploits inspired Savarkar to fight against the British hated most of the so called reformists and religious converts. They were of the impression that ‘these so called reformists and religious baiters would one day destroy our Nation and turn infidels and traitors to their own country !’
– Gurudev Dr Kateswamiji

One cannot forget the sacrifices of the martyrs !

For killing Rand and Lt. Ayerst, the Chapekar and Mahadev Ranade were hanged to death. The story how these brave men sacrificed themselves on the altar of freedom struggle is inspiring.
Today one may feel that all the attempts of Chapekar and Ranade were juvenile and the killing of Rand and Ayerst were unnecessary ! But one must remember all this work was for their love of their country. The Chapekar brothers did not stand to make any money nor collect laurels for this act. They shed their blood for their brethren. There was no personal benefit to them or their family. Are we ready to go to such extremes for the sake of our nation ? Have we done anything as yet for our country ?
Answer these questions before venturing to criticise the valiant brothers and the freedom fighters. The critique of such valiant acts is like a coward calling for peace when faced with mortal peril ! Those doing this would also be consigned to hell ! Remember well, the sacrifice of Chapeker Brothers and that of Ranade will never be forgotten by our countrymen. It is eternally etched on the mind of the Indian!
Dr Sachidananda Shevde, Mukt Ved
The sacrifice and bravery of these young men, only in their early twenties, makes one feel proud even today. This is the only instance of heroic sacrifice in the whole world, made by 3 brothers for the welfare of their country.

We pay obeisance to these invaluable sons of Bharat.