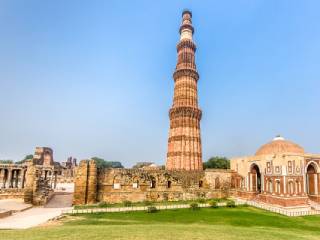 Members of Hindu groups protested outside the Qutb Minar complex in Delhi today, demanding that the world heritage site be handed over to Hindus since it was built by Muslim invaders after destroying Hindu and Jain temples.

Activists from Mahakal Manav Seva, a little-known Hindu organisation, also squatted in front of the complex and chanted the Hanuman Chalisa. They demanded that the monument be renamed Vishnu Stambh since the minar was originally part of a tower constructed atop an ancient Ganesha temple. They claimed that statues of Hindu gods and goddesses were still present on the walls of the mosque called Quwwal-ul-Islam mosque inside the Qutb Minar complex.

The activists were arrested when they tried to force their way into the complex.

The controversy over the Qutb Minar is not new, but it has suddenly got an impetus after the controversy over the Gyanvapi mosque started making headlines. The Vishwa Hindu Parishad (VHP), which has been spearheading the campaign to restore temples to their old glory inside the Qutb Minar complex, has taken it up at various levels of the government. Vinod Bansal, the national spokesperson of the VHP, said: “Muslim invaders destroyed 27 Jain and Hindu temples, the remains of which can be clearly seen on the walls of the mosque. How long will we continue to tolerate this insult? Now that we have a government which is proud of our Sanatan dharma, we demand that gods and goddesses present inside the Qutb Minar complex be restored to their dignity.”

He said the ASI plaque present in the complex categorically said the monument was built after destroying temples. Bansal said some statues of gods and goddesses were in an extremely disrespectful state. “It is time we correct this indignity to our gods and goddesses,” he said. Bansal, however, made it clear that the VHP had nothing against the Qutb Minar, which is a UNESCO World Heritage site.