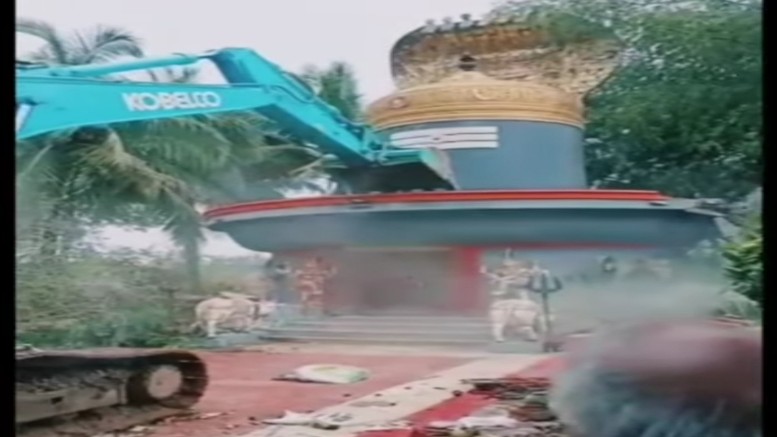 Another temple has been demolished in Tamil Nadu on the allegation of encroaching government land. Accusing the government authorities of not giving time to remove the murtis, devotees have vowed to restore the temple and to face the issue through court.

The Kanaka Kaleeswarar temple near Sriperumbudur, run by Tapovanam Charitable trust has not only been operating on its own successfully but also been helping small temples around it to survive. A few days ago the temple was razed to the ground based on accusations that the temple encroached government land.

Based on the Revenue Department’s accusation and assessment the temple was demolished on November 26 despite the objections of devotees and not issuing notice. It is alleged that even as the devotees had gone to meet the district collector to arrive at a compromise, the temple was razed by Revenue Department officials. It is also alleged that despite assuring the devotees that they will not demolish the garbha griha officials demolished it as well. 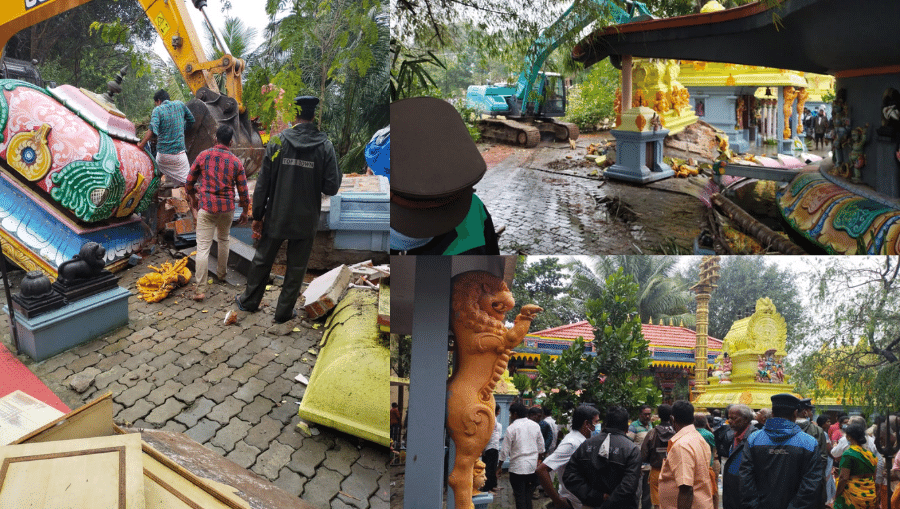 The requests made by devotees to give time to remove the murtis as prescribed by the scriptures. It is said that the garbha griha was built on a 15 cent land parcel that was legally acquired. Trustees and devotees accuse that neglecting this fact and assuring that they will demolish only the compound wall and Annadana hall, officials connived with missionary forces to demolish the entire temple.

The temple and Tapovanam Trust are said to have acquired quite a reputation for helping other temples and preventing conversion in the region. Hindu organisations have vowed to get justice through legal means and to restore the temple. This adds to the continuing number of temples being demolished in a rapid manner on the allegation of encroachment.

BJP legal wing secretary Aswathaman condemned the incident and questioned, when the government is taking over temple lands with impunity to build government offices/quarters why won’t it tolerate temples built on government land. Sole might think that it is a wrong comparison. But when temple funds are used to open colleges and schools where even non-Hindus are employed and educated, shouldn’t the government open its purse and properties for Hindu causes as well? When collector offices and police quarters(Kallakurichi Veerachozhapuram temple) are built on temple land despite the court’s objection, why can’t temples be built on government land?

However with a hostile party in power Hindus continue to face persecution in the state. In July 9 temples were razed on the same day in Coimbatore. Back in January, even before the atheist DMK came to power, one of its prominent functionaries was accused of aiding missionaries in vandalising and destroying a temple in Chennai. Anti-Hindu and anti-temple activities continue to rise after the party came to power.

The sub-temples of Shri Madura Kaliamman temple in Siruvachur, Perambalur were repeatedly vandalised, their murtis beheaded 4 times in the past few months. Another temple’s chariots were set on fire by a Muslim man who nonchalantly confessed that he’ll do the same again if he gets the chance. Recently a millennia old temple tank was desecrated by Muslims who used it as a swimming pool and allegedly consumed alcohol and beef on its banks.