On the topic of increasing conversions in East and North-East India, a seminar was held on the sixth day of Online’ 9th All India Hindu Rashtra Convention. Hindus are facing several problems in a country where Hindus are in majority. One of the problems is related to conversions, which is faced by Hindus on a large scale, in the East and North-East part of India. Many speakers explained the situation throwing light on local issues. They also underlined the need for passing a law banning conversions. They also emphasized the need for creating an atmosphere which would make Hindus feel safe who wanted to return to Hindu Dharma. Given below is a gist of their speeches. 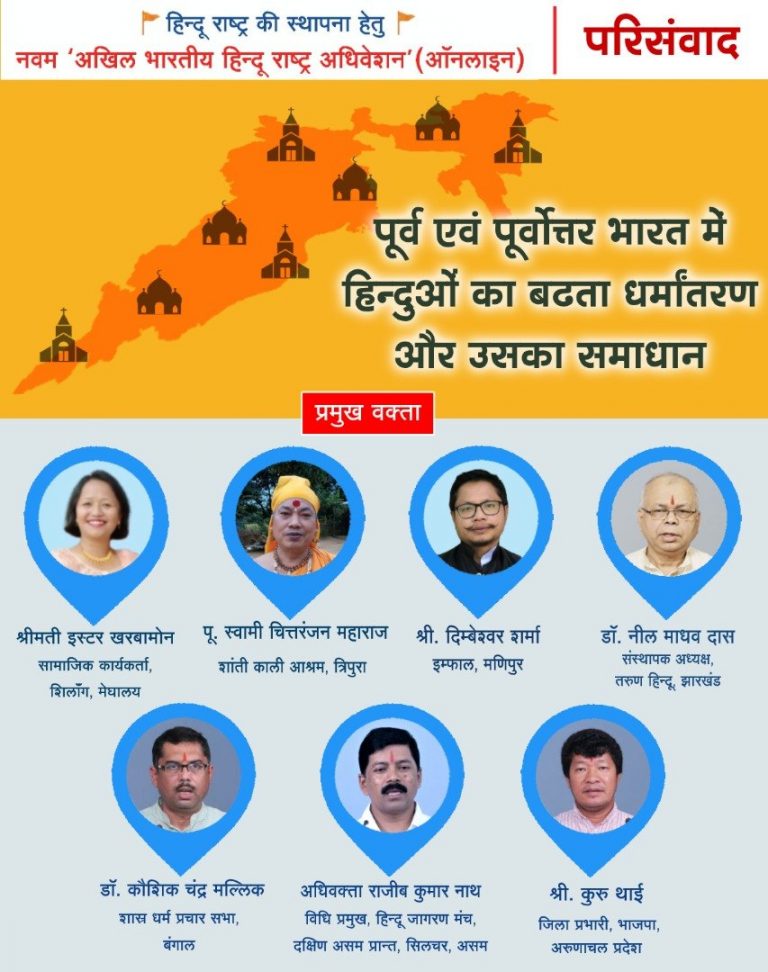 Some Hindu parents enroll their children in convent schools due to their fascination for education through English medium and the conversion starts from that step. We have set up 26 ashrams under auspices of Shanti Kali Ashram. Tribal students are provided free education, food and stay in 4 of these ashrams.

Stringent action used to be taken against incidents of conversions during the regime of the earlier State Government; therefore, such incidents had reduced; but few ministers of the present Government have been meeting missionaries, bishops or maulavis. Not only money but liquor is also provided for conversions. Few Hindus go to church where they are felicitated. They then fall prey to conversion. Churches are immediately constructed for such Hindus. Secular rulers and police also suppress Hindus. There are 23137 voluntary organizations working for propagation of Christianity and they get funds to the tune of Rs.15209 crores from other countries. They keep 10% of this money and 90% of the funds are used for churches. The Union Government should stop funds received by such organizations from other countries as a solution to the problem of conversions.

3. Anti-conversion law needs to be passed in Bengal and it should be effectively implemented ! – Dr.Kaushikchandra Mallik, ‘Shaastra-Dharma Prachar Sabha’, Bengal

The present condition of Hindus in Bengal is like a goat standing in the door of a butcher. This condition has become worse since Mamata Begum’s Government has taken over power. Everyone knows about the opposition to Durga-puja. At a place of ‘Durga-pujan’, one politician had organized ‘azan’ to promote the principle of ‘Sarva-Dharma-Sama-Bhav’.  Law banning conversions needs to be passed in the State and it should be effectively implemented to stop such absurdity. Citizenship Amendment Act should also be implemented in Bengal and Hindus will have to be imparted ‘Dharmashikshan’.

Cases of conversions and love-jihad are rising in Assam day by day. We are solving 70-80% of love jihad cases through counseling. Muslim youth kidnap Hindu girls in the country and forcibly marry them. Hindus need to be awakened and alert.

A circular was published by local churches during Parliamentary elections advising people to vote for only Christian candidates. Conversions happening under the guise of tourism is a serious problem. Few converted Hindus obtain all benefits which they were getting as Hindus as per their caste; besides they also get all benefits given to minority communities. Conversions are endangering our culture.

7. There is a huge temple of Bhagavan Shrikrushna in Manipur which is known as ‘Govind’ and worshipped by people. Conversions are taking place on a large scale and only 40% Hindus are left here. It is a conspiracy to separate North-Eastern States from Bharat. – Shri. Dimbeshwar  Sharma, Imphal, Manipur

All Saints and every Hindu should participate in the mission of protection of culture ! – His Holiness Dr. Gunaprakash Chaitanyaji Maharaj, President, all-India Akhil Bharatiya Varshiya Dharmasangh

God comes in the form of incarnation and Saints for establishing Bhagavant-Dharma. Prabhu Shriram did the same work. We also have to establish Hindu Rashtra in the same way. Our Sanatan culture has been created through ‘Vedas’ and not by any individual. Presently, however, we are blindly following western culture. Development cannot be achieved by adopting western culture. Western culture promotes only materialism; but God realization is not possible. Every soul born in India however, can realize God. The good fortune of all living beings, by being born in this land, is not available even to heroes of western countries. Our citizens should therefore, come together and pay attention to the protection of our lifestyle, culture, gou-mata and ‘Varnashrama’ system. All Saints and every Hindu should contribute for protection of this auspicious culture. A country doesn’t face calamities when people abide by Dharma. A king cannot give good governance unless he is righteous. Shriram created an ideal nation. We have to establish similar governance in the form of Hindu Rashtra. Let us remember that we have been sent as God’s messengers for this mission.