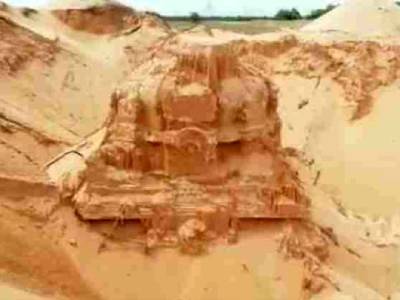 An ancient temple of Lord Nageswara was unearthed in Penna River near Peramalla Padu village in Chejarla Mandal of Nellore district in Andhra Pradesh on Tuesday. The temple was reportedly buried in the sand.

A local said that the temple was well known some two-three generations ago. The temple was filled up with sand almost 80-years ago. As per reports, some villagers took the initiative to find out the temple. It took them one day to discover the pinnacle of the temple.

A resident of Perumallapadu village, Vara Prasad said, “This 200-year-old temple was quite popular among the villagers. The elders of our villagers told us that this shrine was filled with sand 75-80 years ago. Later, those villagers shifted to the other side and the temple was also ruined.”

He added, “Then, one day a man Galipala Sudarsan initiated to bring this temple out. The sanctum sanctorum is much deeper and the area in which it was found is Mukha Mantapam. We are now planning to reconstruct the temple but where it should be made is the dilemma. We have to check the condition and status of Lord Shiva’s Idol. We will seek advice from the elders and the priests.

The efforts are on to bring out the temple from the depth of the river bed.