Hindu unification due to chanting sessions ! 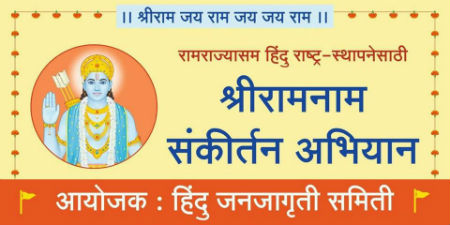 Mumbai : Chanting sessions of Shriram’s name were organized at temples in Mumbai, Navi Mumbai and Palghar by Sanatan Sanstha’s seekers, readers of ‘Sanatan Prabhat’ periodicals and even by devout Hindus at their residences with the wish of establishing divine kingdom like ‘Rama-rajya’. People participating in these chanting sessions felt very happy to chant ‘Shriram Jai Ram Jai Jai Ram’ and they were able to chant with full concentration. Sanatan Sanstha’s seekers and activists of Hindu Janajagruti Samiti (HJS) have started this drive.

Bhandup : Chanting sessions were held at 9 places where in all, 89 persons participated in those sessions.

Mulund : Women attending ‘Dharma-satsang’ had organized chanting session at Vitthal-Rukmini Mandir so also chanting was organized by priests of Shriram Mandir in Gandhinagar. Few women participated with their small children. Similar chanting sessions were held at 2 more places. In all, 47 people joined chanting held at different places in Mulund.

Ghatkopar : Chanting was held at 10 places and 81 people joined chanting. One woman recorded it in her cell-phone because she liked it.

Chanting happening with intense ‘bhav’ and experiencing of peace !

Chanting session was held at the residence of Vaishali Jadhav, a devout Hindu. The participants said that they felt that chanting was done with lot of devotion and in better way than chanting done at last two times. They felt peaceful and their unwanted thoughts vanished.

Kurla : Chanting was held at 4 places. 34 people joined these sessions. They felt quite pleasant and divine energy while chanting.

Mira Road : Chanting was held at 3 places. 29 people attended chanting session at Vitthal-Rukmini Mandir of Kashigaon; including Shri. Kesarinath Mhatre, BJP’s municipal councilor and a devout Hindu. He said that he would get chanting done from students of ‘Adarsh Vidyalaya’. Shri. Mhatre is the President of this school. Chanting was held at the residence of Shri. Uttarkar, a subscriber of ‘Sanatan Prabhat’ in Mithila Society at Atmaram Nagar. He sponsored 21 short-books on ‘Rangoli’. His 6 year-old granddaughter also joined chanting session.

Borivali : Chanting was held at 2 places. The participants said that they felt quite sure about ‘Rama-rajya’ getting established soon.

Dahanu : Chanting was held at 3 places. Women from local ‘Bhajani Mandal’ said that they would hold such chanting session once in a week at their member’s place, in turns. At one place, the participants were given information on festival of ‘Nag-panchami’.

Boisar : Chanting was held at 4 places.

2. Many participants said that they could feel presence of Shriram while chanting held at Snehnagar Chitralaya and at Bhaiyawada, people felt joy while chanting. They have decided to hold such chanting sessions twice in a week.

3. Chanting was held at Hanuman Mandir in MSEB Complex. Women participating in chanting session expressed gratitude for getting such opportunity and chanting done from them for establishing ‘Rama-rajya’. At Manvelpada of Nalasopara, 65 people from Sadguru Shri Aniruddhabapu Sect did chanting with total concentration. Chanting was held at Panch-mukhi Hanuman Mandir on West. Marwadi Samaj Bhajani Mandal organized chanting at Diwaneshwar Mahadev Mandir at Vasai. They also made all preparations for holding chanting session.

Sanpada : Chanting was held at 3 places in which, 31 people were present. At one place, participants showed interest in having such session once in every week.

Koparkhairane : Chanting was held at the residence of Smt. Chavan

Nerul : Chanting was held at various places and people had good experiences. Some of them said that they would chant every day.

The President of Shri Ganesh Mandir had organized such chanting. One ‘jidnyasu’ attending chanting session at the residence of Sou. Shubhangi Bhavasar at Kharghar extended invitation for ‘haldi-kumkum’ program which was to be held at her place.

Giving more time for chanting on getting spiritual experiences !

Chanting was held at Hanuman Mandir during ‘Hari-path’. The response was negative for first 15 minutes from people but later, they felt good so it was done for 30 minutes. They said that they would chant for 15 minutes every day. It was decided to hold chanting session for 15 minutes at the residence of Sou. Shobha Arote; but it was extended to 45 minutes since participants experienced lot of energy. Sou. Arote’s son was not feeling well but after chanting, he felt better. One participant said that he felt peaceful while chanting.

Parel : Chanting was done at 3 places by 38 people. At one place, people felt good while chanting, so it was extended by 10 minutes. Chanting was held at the residence of Sou. Radhika Kerkar, a subscriber of ‘Sanatan Prabhat’. Attendees showed interest in HJS’ conducting ‘Dharmashikshan’ classes.

Consort or Divine Energy of Shrīkrushṇa,

A hymn of praise. These hymns praise aspects of the Divine, such as Devi, Deity Shiva, or Shrīvishṇu.

The famous and much worshipped Deity, a form of Shrīvishṇu, in the temple at Pandharpur, Maharashtra

1. A posture used for directing the flow of spiritual energy into the Sushumnānāḍī.