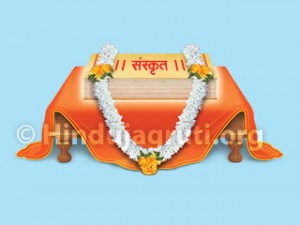 1. Specialities of ‘Sanskrit’ language : 26th August 2018 is going to be celebrated as ‘Sanskrit Din’. Sanskrit means sacred and glorifying legacy of Hindu culture ! Sanskrit language and Sanskriti have close connection. Subhashitas and shloka are specialty of Sanskrit language. They have minimum words but deep meanings on any subject.

3. Books published by Sanatan are a treasure which create love and respect towards own language : After ‘Deva-bhasha’ Sanskrit, Marathi is the most ‘sattvik’ language but it is stifled in Maharashtra. Sanatan Sanstha has published books which will eliminate disinterest in people and create love and respect towards these languages. Specialities of Sanskrit and Marathi have been illustrated in these books.

Seekers can plan for distribution of the above books to ‘jidnyasus’ to maximum extent and try to create love and respect towards own language. Also you can buy the books online on www.sanatanshop.com