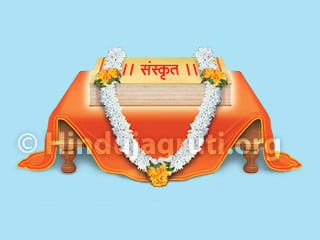 Sanskrut, a divine language, has elucidated to the mankind the great path of acquiring God. However, the ungrateful humans, especially the various rulers from the post-independence era are striving hard to eradicate this divine language. The comman man is unable to percieve the serious consequences of their actions. Sanskrut language has been created by God for the benefit of entire human race and our future generation should not think that because of our negligence we allowed Sanskrut language to die. Therefore it is imperative that we should undertake the gigantic task of propogating Sanskrut language in the society at a very broad scale, and consider it as our prime duty.  We pray to Shri Guru‘s feet that after reading this information human beings, especially the Hindus, would understand the significance of this divine language and atleast for the sake of their own benefit, would make an effort to reinstate it.

‘While describing the steps of creation of Sanskrit language, few people with western influence say that, ‘At first humans realized that ‘sound is emitted from their mouth’. The sounds got transformed into signs, signs into symbols and symbols into letters. The list of alphabets, nouns for various objects got in turn created and even as a result, the Sanskrit language was also formed.’ In fact all of this is false. Sanskrit was created through the resolve of God. After the creation of human beings, God Himself provided everything that was necessary for humans. Not only that, God made arrangements for everything that would be needed by human beings in the course of time. Even before creating the universe, God created a divine language that would be useful for human beings for attaining final liberation (moksha). This divine language is Sanskrit. In the Treta yug (era), human beings lost their capability to absorb knowledge that was beyond words. Therefore, in order to enable embodied souls to attain final liberation (moksha) through the medium of words, Lord Datta re-created Sanskrit language.

1.2 Till the end of Dvapar yug (era), Sanskrit was the only language of the entire universe !

‘During Satya yug, Treta yug and Dvapar yug, Sanskrit was the only language of the entire universe. Therefore it was termed as ‘Universal language‘. Even during the era of Kauravs and Pandavs, Sanskrut was the sole language of the universe.’

2. Creation of other languages by breaking down Sanskrit language

Post Kaurav-Pandav Mahabharat war, Vaidik i.e. universal empire of Hindus began shrinking slowly and consequently the Sanskrit language too got disintegrated and through its various imperfect regional pronounciations, other languages got created. This is the reason that one can come across lot of words, in other languages like English, which are similar to Sanskrit language. For e.g., in Sanskrit cow is called as “Gow“. Also in Sanskrut tooth is called a “danta“.

3. Sanskrit language rich with various names for each animal, object and God !

‘In Sanskrit language there was a custom of giving multiple names to animals, objects etc. E.g. Ox has more than 60 names like balad, vrushabh, gonath etc.; elephant has more than 100 names like gaja, kunjar, hastin, dantin, vaaran etc.; lion has more than 80 names like vanaraj, kesarin, mrugendra, shardul; water has synonyms like jala, jivan, udak, paya, toya, aap; gold has synonyms like swarna, kanchan, hem, kanak, hiranya, etc’.  Many people have memorized 12 names of Sun deity, 1000 names of Lord Vishnu and 1000 names of Lord Ganesh. Each of these Names does carry a special characteristic of the particular deity.

4. Names of the deities

‘Vedas have various names for a deity and it also has a single name for various deities. It is said that the Mahabharat had 10,000 names for Lord Shiva and out of which 1800 names are mentioned in the holy text. In fact when our mind becomes spiritual, then each name appears to be that of The Lord.’ – H.H. Ramswarup Garg

5. Not even a single inclusion of
abusive word in well-cultured Sanskrit language !

‘We fall short of words while describing the well-culturedness of Divine Sanskrit language! In spite of having thousands of words, this language has not included a single word with the meaning of ‘kulup‘ (lock). What could be the reason behind this? In order to enable Koutsa to pay his Gurudakshina (offering to Guru), Kuber (God of wealth) had showered gold coins all over the state of Raghuraja. However, not even a single gold coin was picked up by any of the citizens! There was no case of robbery in the state and therefore there was no tradition of putting a ‘lock’. There is no inclusion of abusive words in the Sanskrit language. There is only one word ‘Mudh‘ (mad), which can be remotely considered as a bad word! The well-culturedness of the language gets absorbed in the citizens who use it; therefore one wishes to say that, ‘Learn Sanskrit and be well-cultured (susanskrut)!’